This Is Who Tom Steyer Says Won the Las Vegas Debate...And They Weren't on the Stage 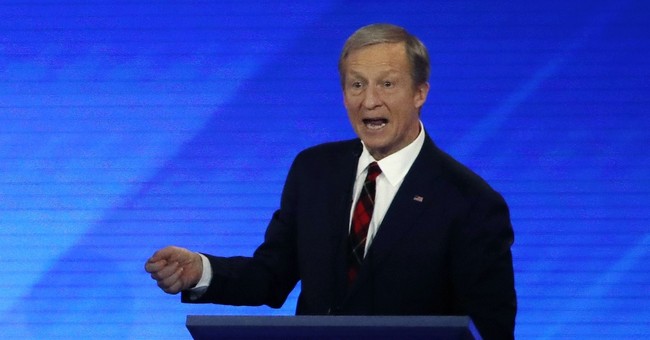 Democratic presidential candidate and billionaire Tom Steyer told CNN on Thursday none of his fellow rivals won Wednesday's debate in Las Vegas because President Trump was the true victor.

"Because I saw so much bickering between Democratic candidates tearing each other down and going after each other and forgetting the fact that what really counts is beating Donald Trump in November of 2020," Steyer said.

"I saw people going after each other’s personality and records instead of remembering that, in fact, the Democratic Party needs to win in November," he added.

Steyer was not on the stage after failing to meet the ever increasing tough thresholds put on the campaigns. The debate featured major clashes between each of the candidates as the race heats up and delegates are now in play.

And just like the other candidates on the stage, Steyer criticized former New York City Mayor Michael Bloomberg.

"I think that people who’ve been as successful as Mike Bloomberg or me should understand that the Democratic Party stands for the idea that the inequality in this country is unacceptable," he explained. "That’s why I said, Alisyn. from the very beginning I said about Mike Bloomberg. You want to run as a Democrat? You have to come out for a wealth tax. I did it long before I was running for president."

Trump's reelection campaign released a statement on the debate, describing the Democratic party being in a "full-scale meltdown."

"The Democrat Party is in the midst of a full-scale meltdown. Americans are watching the party of JFK be torn apart by anti-job socialists and anti-worker globalists who want to control every aspect of Americans’ lives. This train wreck is nothing compared to what they would do to our country. None of these candidates will be able to go toe to toe with President Trump in November," National Press Secretary Kayleigh McEnany said.