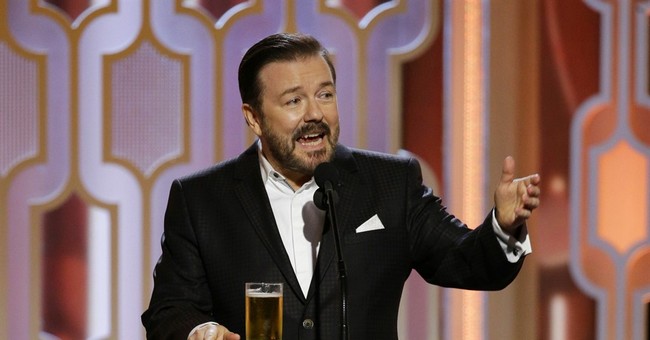 Golden Globes host Ricky Gervais delivered on his promise to take no prisoners on Sunday. No one was safe from his jokes, everything and everyone from Apple to Harvey Weinstein to the entire audience itself was skewered throughout the night.

"If you do win an award tonight, don't use it as a platform to make a political speech, alright. You're in no position to lecture the public about anything. You know nothing about the real world. Most of you spent less time in school than Greta Thunberg," Gervais told the audience. "So, if you win, come up, accept your little award, thank your agent, and your guard and f**k off."

When the audience groaned at a "Jeffrey Epstein did not kill himself" joke, Gervais told the audience, "Shut up, I know he's your friend, but I don't care."

While Gervais received much praise on social media, media reviewers panned his overall performance and jokes.

"Good Riddance to Ricky Gervais, the Sneering, Purposefully Intolerable Golden Globes Host," was The Ringer's headline for their story on the evening.

The TV critic for the Los Angeles Times lamented how the mood for the lavish awards show "was already sober thanks to an impeachment, threat of war with Iran and Australian bush fires. The last thing anyone needed was Ricky Gervais there, telling them they sucked."

The #GoldenGlobes mood was already sober thanks to an impeachment, threat of war with Iran and Australian bush fires. The last thing anyone needed was Ricky Gervais there, telling them they sucked. https://t.co/58PAMOikhu

Ricky Gervais' cynicism was out of step on a night when nearly everyone seemed eager, even desperate, for earnest political change. Read @LorraineAli's smart, pungent review of the #GoldenGlobes, for @latimes: https://t.co/g47G6hgVXx

Just how big a jerk was Ricky Gervais at the Golden Globes? https://t.co/Eecz2Znl1F

The fake self-flagellating "let's have Gervais 'roast' people LOL" thing has turned into THE grossest faux-populist spectacle outside The Razzies (and Razzies are shit.)

Vox felt inclined to criticize Gervais' jokes a day before he told them at the show: "How to tell a Ricky Gervais joke: Offend, defend, repeat."

"He poked and prodded at the privilege and hypocrisy of the rich and famous, though his iron may be too dull at this point to stoke real fire. The bit doesn’t have the same edge, with more rolled eyes than wide eyes at the material in the numerous cutaways to unamused celebrities in the audience," the Daily Beast's Kevin Fallon wrote.

Of course celebrities being called out for their hypocrisy right to their faces will not enjoy it, and that's why many others did. Time and time again, celebrities use their winning speech to lecture other Americans how they are what's wrong with America and why they should listen to the people at the award show, as they schmooze with people like Harvey Weinstein and Les Moonves.

Now this does not make Gervais a conservative and that's okay. A good roast comedian goes after everyone and is funny while doing it.