House Republicans to Adam Schiff: The Whistleblower Must Publicly Testify 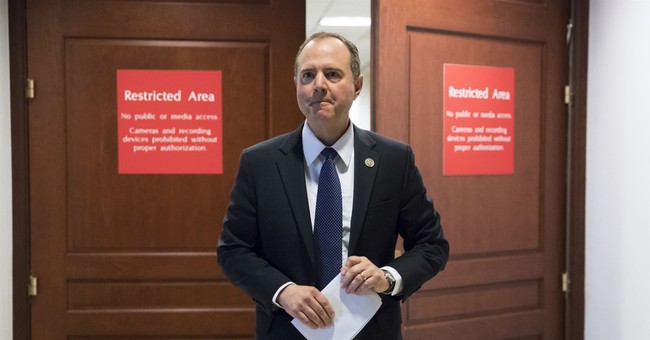 The top Republicans on the House Intelligence and Oversight and Reform Committees sent a letter on Wednesday to Intelligence Chairman Adam Schiff (D-CA) asking the whistleblower, who sparked the impeachment inquiry, to testify publicly.

In a letter obtained by Townhall, Rep. Jim Jordan (R-OH) and Rep. Devin Nunes (R-CA) said they were "surprised" when Schiff announced the "Committees will not receive testimony from the anonymous intelligence community employee...You had earlier committed that the employee would provide 'unfiltered' testimony 'very soon,' only to reverse course following the revelations that the employee had bias against President Donald Trump and that you had received a secret, early account of the allegations."

Jordan and Nunes wrote since the impeachment inquiry "gathers information that contradicts the employee's allegations, we ask that you arrange for the Committees to receive public testimony from the employee and all individuals he or she relied upon in formulating the complaint."

They say the reason for the public testimony is so Congress can "fully assess the sources and creditability of the employee."

"The fact that the whistleblower has three political biases against the President shows just how rigged this whole impeachment process is. It’s getting ridiculous," a congressional source with direct knowledge of the matter told Townhall.

Jordan has blasted Schiff for running an "unfair partisan process" with Speaker of the House Nancy Pelosi's (D-CA) blessing.

"We can’t see the transcripts. He selectively leaks part of the transcripts and oh, in the interviews, no White House lawyers can be there. No agency lawyers can be there. The State Department can’t have lawyers there. The minority isn’t given subpoena authority. We can’t get the witnesses we may want to call to get the information for the American people," he told Fox News on Monday.