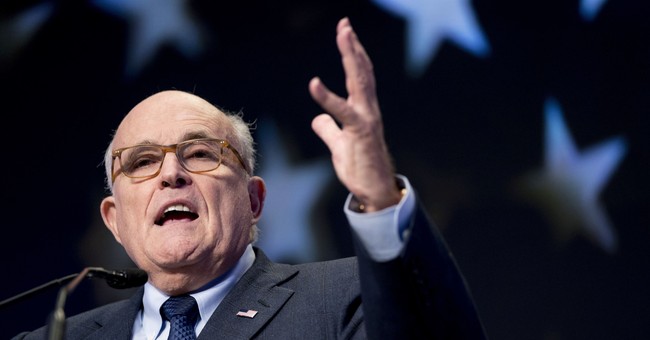 Rudy Giuliani said he will consider cooperating with the House Intelligence Committee if Chairman Adam Schiff is removed and a more neutral Democrat replaces him.

ABC's "This Week" host George Stephanopoulos pressed President Trump's personal lawyer on whether or not he would cooperate with the committee about his role in pushing Ukraine to investigate former Vice President Joe Biden and his son, Hunter.

"That is a question that has a lot, a lot implications to it. Believe or not, I am an attorney. Everything I did was to defend my client. I am proud of what I did," Giuliani replied, saying he discovered a "massive pay-to-play scheme, not unlike the Clinton Foundation."

After Stephanopoulos repeatedly asked Giuliani about his cooperation, Giuliani said, "I wouldn't cooperate with Adam Schiff. I think Adam Schiff should be removed. If they remove Adam Schiff, if they put a neutral person in who hasn't pre-judge the case. If they put someone in, a Democrat, who hasn't expressed an opinion yet," then he will "consider it."

Republican Rep. Andy Biggs introduced a resolution on Friday to censure Schiff for reading an alternate version of President Donald Trump’s call with Ukrainian President Volodymyr Zelensky in the beginning of their hearing with Acting Director of National Intelligence Joseph Maguire about the whistleblower complaint.

Schiff later said his alterations to the transcript, where he read that Trump told the Ukrainian President “seven times” to “make up dirt on my political opponent," were a "parody."

"Through this process, if the President has committed high crimes or misdemeanors, Congress may overturn the election of the President and the will of the American people. It is therefore inexcusable to toy with the process and mislead the American public with such a statement," Biggs said.