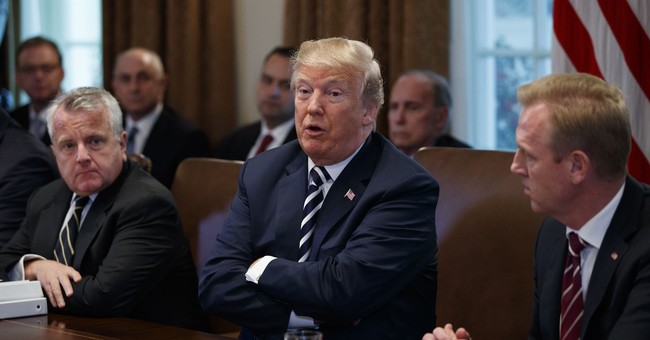 During a press gaggle with reporters on the way back from his trip abroad, Acting Secretary of Defense Patrick Shanahan said he has yet to see a military necessity for a wall along the U.S.-Mexico border, but will be looking into it when he gets back.

This comes shortly after President Donald Trump declared a national emergency in order to get more walls and barriers built.

“So I think what my question is is do you think a border wall is militarily necessary at this point,” a reporter asked, according to a Department of Defense transcript.

“The military determination is born out of the work of the Joint Staff so when we think about use of the Department of Defense, the Joint Staff are the planners that come back and say: ‘Here are the appropriate use of those resources, how many, where.’ They have been doing, we call it mission analysis. If you were to step back in time and look at our interaction with the Department of Homeland Security, they've been tasking us to support them,” Shanahan explained.

Shanahan said it had been determined by them to help the Department of Homeland Security to use troops in a broad manner and just as a small task force. Saying he understands the attention this will receive, the DOD has “identified the steps we would take to make those decisions. This is the important part of that. We laid that out so we could do it quickly. We don't want to fumble through this process.”

“So at this point you have not determined that specifically a wall is required to meet that...,” a reporter followed-up.

“There's been no determinations by me,” Shanahan replied. “So that's what I'll be doing tomorrow. I just want to make a point of this. We are following the law, using the rules and we're not bending the rules, OK?”

Shanahan also said the main determination is where they are going to divert funds from to fund the wall.

“We understand there are — are some priorities that won't be considered,” he said. “Military housing, what's been interesting, I've received a number of letters. I've had lots of feedback: ‘Do not jeopardize the projects that are underway.’ Secretary Spencer and so many people are very mindful of that, and I appreciate we are trying to work through this very complicated situation.”

The Pentagon released a statement on Friday saying 10 U.S.C., Section 2808 (Military Construction (MILCON)), “authorizes the secretary of defense to determine whether border barriers are necessary to support the use of the armed forces and to re-direct unobligated DOD MILCON funding to construct border barriers if required.”