Mattis On Senators' Criticism Over Khashoggi Intel: 'Even My Adversaries Have Learned to Count On My Word' 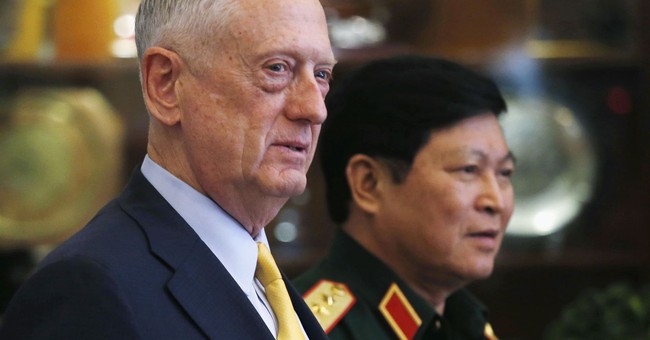 Secretary of Defense James Mattis responded to criticisms after he and Secretary of State Mike Pompeo gave an intelligence brief to Senators on the murder of Saudi Jamal Khashoggi. Sen. Chris Murphy (D-Conn.) and Sen. Lindsey Graham (R-S.C.) have called out the pair.

“I think the Secretary of Defense and Secretary of State are in a bad spot because the president has given this bear hug to MBS and to the entire Saudi regime, so they are bound to carry out his bizarre policy,” Murphy said during a “Morning Joe” interview. “But at the same time, it’s sort of hard to call this a cover-up given the fact that everybody in that briefing last week knew that Pompeo and Mattis were misleading us, knew there was no way this murder happened without the consent and direction of MBS.”

"I think Secretary Pompeo and Secretary Mattis are following the lead of the president. There’s not a smoking gun, there’s a smoking saw," Graham told reporters after the briefing. "You have to be willfully blind not to come to the conclusion that this was orchestrated and organized under the command of MBS and he was intrinsically involved in the demise of Mr. Khashoggi."

Sen. Graham says "you have to be willfully blind" not to come to conclusion that Saudi crown prince was "integrally involved" in Khashoggi murder. Pomepo and Mattis aren't drawing this conclusion because admin "doesn't want to go down this road," he adds https://t.co/mBwH1M7AiX pic.twitter.com/a6VgGTvrF5

Mattis was specifically asked about Graham’s comments during his trip to the Global Coalition to Defeat-ISIS meeting in Ottawa on Thursday.

“The Senator, he has a right to his own opinion,” Mattis replied, according to the Department of Defense transcript.

“What I've been asked is — if I say something, I need the evidence,” he continued. “So there's — whether you call it smoking gun, smoking saw; if can point to something that says somebody is implicated, I've already said where I stand on that, and even my adversaries have learned to count on my word.”

He explained how steps have been taken to punish those who are known to have been involved with Khashoggi’s murder.

“But in my role in the executive branch, I need to have a specific,” Mattis continued. “There is sincere — there are sincere, studious people who are drawing different conclusions. We are doing everything we can to go down every rabbit hole to find what's there and that's my responsibility because a significant amount of the U.S. intelligence apparatus, including a rather critical part of it, is under my cognizance.”

Mattis had told reporters they did not have a “smoking gun that the Crown Prince was involved. Not the intelligence community or anyone else. There is no smoking gun.”