Mattis: Military May Stay at the Border Past December 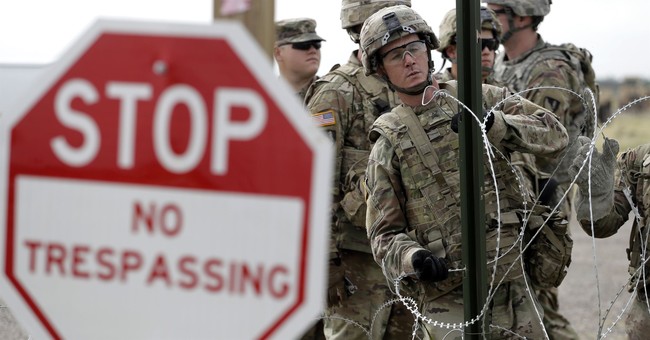 With the current deployment of active-duty U.S. military members to the U.S.-Mexico border scheduled to end in December, Secretary of Defense James Mattis hinted the deployment for some of the troops may be extended.

“We'll react to the Department of Homeland Security if they ask for it,” he told reporters. “Right now we're...we're working with them on the staffs. It comes down to logistics issues right now primarily...how many miles of wire do they need, how much they defined.”

Mattis said the reinforcing of the ports of entries “are pretty much, I think, done. There's a little on the flanks of a couple of them we're still working on. So we'll have to see if the — if the request extends further.”

After migrants in the caravan had stormed the border, near the San Ysidro port of entry, and threw rocks at border agents, U.S. Northern Command also said they will continue to support DHS:

Department of Defense military personnel will not be conducting law enforcement functions, but are authorized to provide force protection for U.S. Customs and Border Protection personnel and help make sure CBP personnel can perform their assigned Federal functions. U.S. Northern Command is providing military support to the Department of Homeland Security and Border protection to secure the southern border of the United States.

When asked if the military will help prevent future incursions, Mattis said that job rests with DHS.

“Border Patrol...it's who you saw and that's who will continue to be responsible for the border,” he replied.

During the same press gaggle, Mattis said the U.S. does not have a “smoking gun” connecting Mohammad Bin Salman Al Saud, the Crown Prince of Saudi Arabia, to the murder of journalist Jamal Khashoggi.