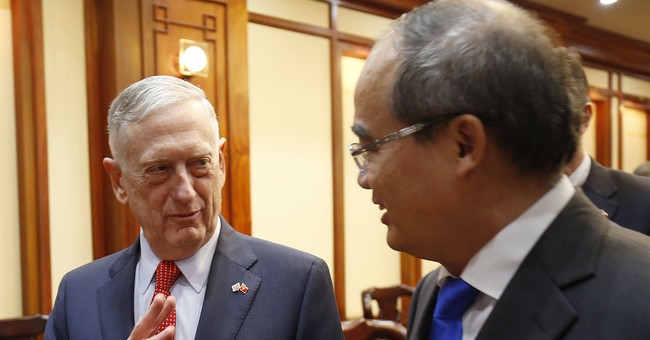 With Donald Trump’s presidency entering its second year, there have been questions, and many criticisms, of if and when he plans on visiting U.S. military members who are deployed in a combat zone, specifically Iraq or Afghanistan.

On the day before Thanksgiving, Secretary of Defense James Mattis told reporters he has had a hand in advising the Commander-in-Chief to not go to such places.

“President Trump hasn't visited troops in war zones during his first two years in office. Do you think he should be going or…” a reporter asked.

“The president's the commander-in-chief and he decides where he needs to go,” Mattis replied, according to the Department of Defense transcript. “There are times I don't want him in certain locations, to be frank with you, for his security and the troop security. So, you know, don't worry about that.”

“Have you told him not to go at certain times or certain locations,” the reporter followed-up.

“There's places that I've been very straightforward I don't want him to go at certain times. Yes,” Mattis said.

Mattis had ran into security issues while visiting Afghanistan. According to CNN, hours after he had left Kabul's Hamid Karzai International Airport, rockets were fired at the location. The Taliban claimed responsibility for the attack and said Mattis was the target.

Over 25 rocket-propelled grenades were used in the attack, with no injuries.

Trump was asked by a reporter about a visit to troops as he left the White House to Florida for the Thanksgiving holiday.

“I’m going to a war zone,” he replied, according to AP.

While many pundits have been criticizing Trump for not visiting service members in war zones, some veterans say such a trip is not only not needed, but also a hindrance to their missions in many cases, as explained by Uncle Chaps of Barstool Sports:

Because taking the Commander In Chief that far, in that type of environment is nothing but show. I’ve heard people talking about, “it lifts the spirits of the troops on the ground!” If you think that, I don’t think you have ever spent any time in the military. No service member wants to spend HOURS getting inspected, cleaning, and ready for the arrival of the President. You take the daily operations and change them to getting ready for a Presidential visit because senior level officers are so concerned with appearances rather than what really matters.

“Troops don’t need the pomp and circumstance of a POTUS visit in a combat zone,” Chaps added. “They need a clear mission in the combat zones in which they operate.”