As the Senate campaign in Massachusetts enters its final days, it seems like the Martha Coakley campaign can not help but continue to make careless mistakes. Firstly, there was the embarrassing incident where a Coakley attack ad had the word Massachusetts spelled incorrectly. Now, after the recent incident with a Weekly Standard writer, Coakley is talking about "aggressive stalkers" following her on the campaign trail even though she has used such trackers before. 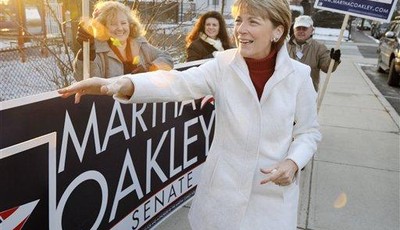 As Meredith Jessup previously reported, a Weekly Standard writer was reportedly pushed down by someone who was physically close to Coakley. It turns out that that person was directly associated with Coakley. The Boston Globe has reported that this "supporter of Democratic US Senate candidate Martha Coakley has acknowledged that he acted too aggressively in an incident Tuesday night in which he jostled a reporter for a conservative magazine..." That Globe article later noted that the "Associated Press reported earlier this week that Meehan [the Coakley supporter involved in the incident] had been dispatched by the Democratic Senatorial Campaign Committee to help the Coakley campaign hone its message."
[# More #]
Speaking of Coakley's message, it seems like she has a certain message to get out about the incident. The Boston Herald yesterday reported the following:

Later on in that article, Coakley was quoted as saying that "I know there were people following, including two from the Brown campaign who have been very aggressive in their stalking..." It seems interesting that Coakley is now very critical of people from opposing campaigns being "aggressive in their stalking"? Interesting and hypocritical. An earlier Boston Globe article noted that "Coakley, of course, was the only candidate in the Democratic primary who regularly used trackers, sending campaign aides to her opponents' events to videotape everything they said."

Coakley remains the front runner in the Massachusetts Senate race. However, her campaign is struggling through these last few days. Unfortunately for her, these are all unforced campaign errors. If her campaign was stronger, maybe a staffer who saw her campaign ads would have realized how to spell the name of the state that Coakley wants to be Senator from. If Meehan, Coakley's campaign supporter was wiser, maybe he would not have alllegedly been so aggressive with a writer. If Coakley was true to her own campaign tactics, she would have accepted that people were going to follow her around to listen to her speeches etc.

Scott Brown is facing an uphill battle but it seems like Coakley and her campaign are making it a little easier for him. This race continues to be close not only because of Scott Brown's strong campaign  but also because of Martha Coakley's weak one.
The Latest Payoff in Pelosi's 'Relief' Bill Will Enrage You
Katie Pavlich