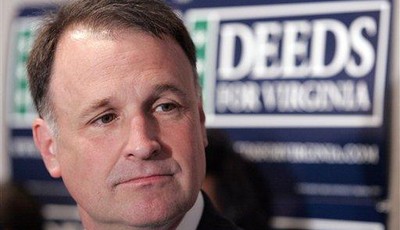 Creigh Deeds knows how to run a negative campaign.

Deeds, who is the Democratic gubernatorial candidate in Virginia, has focused a lot of attention during his campaign on a controversial thesis that his opponent wrote in the 1980's. Now, with less than four weeks to go before the election, Deeds has also gone negative on his own party stating how difficult it is running his campaign with voters worried about his party's national agenda. Deeds' campaign has been so focused on negativitiy that a recent Politico.com story featured a headline that simply read "Dems beg Deeds for positive message."

According to a recent Washington Post poll, Republican gubernatorial candidate Robert McDonnell currently has a strong lead over Deeds. According to the article about that poll, "McDonnell leads 53 to 44 percent among likely voters, expanding on the four-point lead he held in mid-September." That article noted how the Democratic candidate's focus on an old controversial thesis by McDonnell had damaged his campaign reputation. It stated that Deeds "is widely seen by voters as running a negative campaign, a finding that might indicate that his aggressive efforts to exploit McDonnell's 20-year-old graduate thesis are turning voters away."[# More #]

In addition to Deeds' campaign against the thesis, a recent Politico.com story noted that Deeds is also willing to go negative against his own party. That article stated that "Virginia Democratic gubernatorial nominee Creigh Deeds said in an interview that he was lagging in the polls entering the final weeks of the campaign in part because of voter concerns over his national party’s agenda." That article later noted that "Deeds said he was now 'reframing' the race in an effort to shift the focus more toward state issues and away from a broader national debate that is perilous for a Democrat running in a slightly right-of-center state." However, no one should forget that that right-of-center state voted for a left-of-center politician last year helping President Obama become the 44th President of the United States.

For the record, Obama remains a popular figure in Virginia. A Rasmussen Reports poll conducted in late September found that "President Obama is viewed favorably by 52% of Virginia voters, up slightly from recent surveys." That poll also noted that "Forty-six percent (46%) of Virginia voters favor the health care plan proposed by the president and congressional Democrats. Fifty-one percent (51%) are opposed." So Virginia voters may still be supportive of their Commander in Chief but they do not support all of his major policies, which may be part of what Deeds was talking about. Obama's personal popularity in the state, though, is not transferring over to Deeds.

During his campaign, Creigh Deeds has run a lot of negative ads. He has focused on a controversial thesis that McDonnell wrote. He has also spoken openly about the negative consequences for his campaign of his party's national political agenda.

Deeds has less than four weeks left until this election but so far, his campaign has too often focused on the negative aspects of his opponent's past and his party's popularity rather than the future of the state of Virginia and what Deeds could mean to it.
(For more information about the gubernatorial campaign in Virginia, click here for Jillian Bandes' take on the race.)

Appalling: CNN Host Says 'We Must Be Suspicious' of the National Guard Units in Washington DC
Matt Vespa