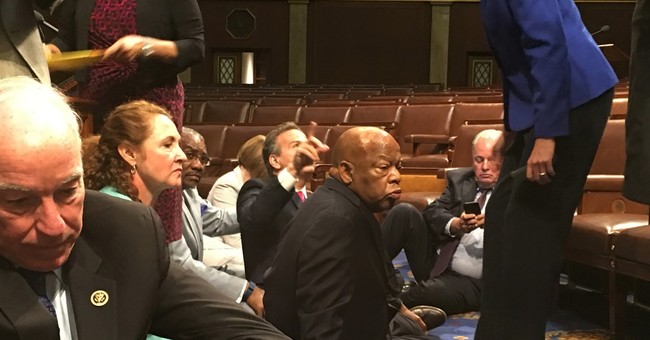 The House Democrats' sit-in for gun control bills (live-streamed from their cellphones here) continued through last night and garnered large quantities of food donations from supporters across the country.

Here's what they ate while the Republicans headed home early for break:

A buffet was laid out in the cloakroom, which lawmakers gladly stood up to eat.

Several boxes of pizza were delivered, courtesy of a Sandy Hook victim's mother (for $344) and Senator Ron Wyden himself.

Someone in California paid $344 to deliver 10-12 Domino's pizzas to John Lewis. This woman is excited to deliver em. pic.twitter.com/sIaAP0Rwg5

Dropped off pizza for @HouseDemocrats & staff supporting them. Keep the pressure on. #NoBillNoBreak #Enough pic.twitter.com/1i9bpr1TU2

Senator Elizabeth Warren made sure the House Democrats were taken care of, bringing a few boxes from Dunkin' Donuts to the sit-in.

Just received some delicious snacks for our #NoBillNoBreak sit-in. Thanks to our Senate colleagues! pic.twitter.com/5HO1rwOWtP

Democrats holed up on the House floor were also treated to Blueberry Pop-Tarts, Pepsi and Mountain Dew, and some apples.

Representative John Yarmuth (KY-3) appreciated the efforts of his constituents to make sure he was properly fed.

My office says people back home are calling asking to send pizzas to the floor. Louisville gets it. We're in this together. #NoBillNoBreak

Information regarding the leftover food has not been released.