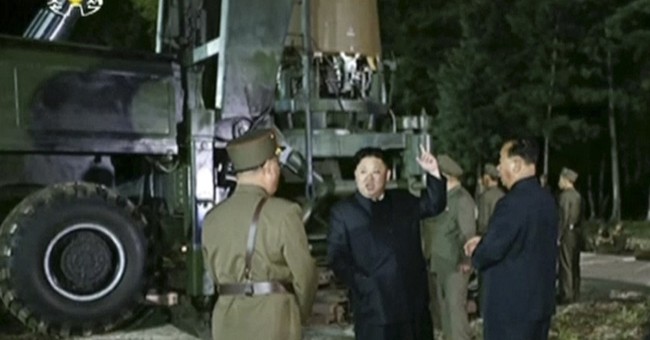 After North Korea's latest successful missile test Friday, Kim Jong Un is claiming that the entire US mainland is within range of NK's missiles, and that he can fire "at random regions and locations at random times."

The Hwasong-14 missile traveled 620 miles and reached a top height of 2,314 miles before landing in water off Japan's coast, the state-run Korean Central News Agency said, adding that it is capable of delivering a "large-sized, heavy nuclear warhead."

NORAD said the missile did not pose a threat to the US mainland, but analysts studying the missile flight data said they believe large portions of the US are within range of the missile, if fired at a lower trajectory.

The nonprofit Union of Concerned Scientists said that if the missile fired Friday reached the height and flight time that is estimated, it could have a theoretical range of at least 6,500 miles, meaning that depending on the size and weight of the warhead it could reach cities such as Los Angeles, Denver or Chicago.

This is the apogee of the Nork missile. Higher than Intl Space Station. Extrapolates to a 10,000mi range. pic.twitter.com/mFzbf3G9UX

Writing at The Daily Beast, Jeffrey Lewis noted that North Korea noticed the reaction in the US after the July 7 missile test, when their preparations for launch were noticed more than an hour ahead of time and resulted in "chest thumping" in the US, and did something different this time:

They tested from a surprise location deep inside North Korea, near the Chinese border where it would be hard to strike. And they did it at night when satellites that rely on optical images are useless. (That’s not every satellite, but it is a good number of them.) This looks like a test from an operational missile base. You know that Washington Post report that the missile will “will have advanced from prototype to assembly line” sometime in 2018? Surprise!

Lewis argues that this incident, which revealed at least one secret missile base, means that North Korea probably has more than one secret base with an unknown number of missiles, and that the time to have "pre-empted" North Korea has passed.