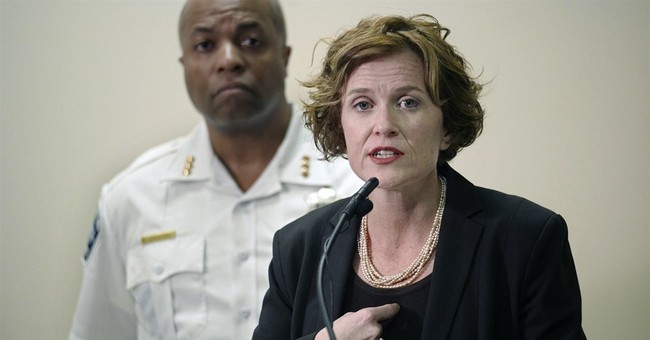 Minneapolis Mayor Betsy Hodges held a press conference to announce the resignation of MPD Chief Janee Harteau's resignation and announce the nomination of Assistant Chief Medaria Arradondo to replace her when a group of protesters walked in and disrupted the event.

The group called for her resignation and asked for her to take all of her staff with her.

They waved signs with the phrases "Messy Betsy" and "You are next" on them and chanted "Bye-bye Betsy."

One man wore a cap with "Philando" on it, referring to black motorist Philando Castile, who was shot to death last year by a suburban officer during a traffic stop.

Hodges eventually gave up and left.

[Minneapolis Police] Union president Bob Kroll says Mayor Betsy Hodges should be the next to step down.

Kroll said Friday that Harteau's departure brings much needed change for the Police Department. He says the chief handled the shooting of 40-year-old Justine Damond poorly, being gone for days and then getting back and "she basically throws the whole department under the bus."

Kroll says Harteau's resignation was just a political ploy for Hodges to save her career. Hodges faces a tough re-election contest.

Kroll added that he's been talking with Noor daily, and is withholding comment on specifics of the shooting because Noor and his attorney haven't yet made a statement to authorities.

Since national media were covering the event, the protest went into the nation's living rooms in real time.

Hodges is going to have to have a real conversation with the protesters, away from the cameras, to effectively lead and not rely on soundbites and comments like, "I hear what you're saying."