Republicans Will Repeal Many 'Midnight' Regulations Enacted By Obama 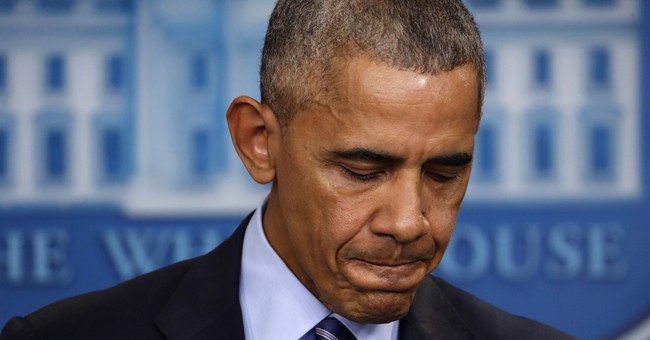 The president may be on vacation, but he still has several dozen agencies working away to enact as many new regulations as possible before the clock runs out. Experts are predicting close to 100 new regulations will be pushed by Obama before he leaves office.

This would be a strong finish for a big-government stalwart who has enacted an historical amount of regulations during his tenure. To put them into perspective, George W. Bush pushed through 462 major rules during his time… Obama has so far issued more than 600.

With his Democrat Party out of power on Capitol Hill, Obama has been forced to play offense in the only branch where he still wields influence – the executive. Most of the regulations deal with environmental issues, but his new rules also target labor, immigration, and a host of other things. The so called “midnight” regulations refer to new administrative rules enacted after Election Day.

Some of the new rules under consideration are expected to have an economic impact of around $100 million a year. The American Actions Forum estimates that the Obama regulations in total will cost the country about $44 billion.

However, there is good news for small-government conservatives just on the horizon.

Trump and his Republican cabinet are on their way. The president-elect will be sworn in on January 20th and he will have a GOP-led Senate and House working with him. Trump, McConnell, and Ryan will have a special weapon for the first 60 days of the new legislative session – the Congressional Review Act.

Passed in 1996 under the Contract with America package, the Congressional Review Act has hardly been used, but carries great power for a new Congress that wishes to undo last-minute regulations by the previous administration. The CRA gives Congress the authority to undo “midnight” regulations by a simple majority vote in both chambers. Congress can undo any particular rule within 60 days of it being written.

Republicans have only utilized the CRA once so far (when the GOP congress in 2001 repealed a Clinton OSHA rule), but have vowed to use it to its full effect once the new Congress begins. They already have around 50 rules they are looking to axe.

It won’t exactly be a cakewalk when the GOP takes full control in January, unfortunately. The CRA comes with its limits. The law calls for consideration of only one rule at a time. Equal time must be considered in both the House and Senate chambers. This will likely clog the flow of repeal.

The 115th United States Congress has not convened yet, but things are already looking very bright for the next two years.