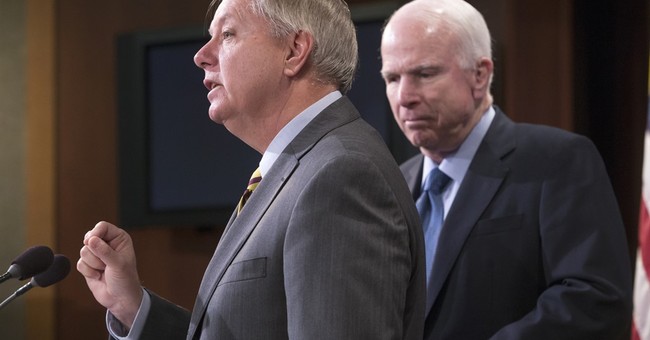 A bipartisan group of senators submitted a letter on Sunday to Senate Majority Leader Mitch McConnell calling for a special committee to investigate possible hacking and election interference by Russian officials.

Senators Chuck Schumer, John McCain, Jack Reed, and Lindsey Graham wrote to McConnell expressing the need for a special, temporary committee to look into the matter. The move is a step up from the same group of bipartisan lawmakers who called for an investigation on December 11th.

"Recent reports of Russian interference in our election should alarm every American,” the group wrote to McConnell. “Cybersecurity is the ultimate cross-jurisdictional challenge, and we must take a comprehensive approach to meet this challenge effectively… “We share your respect for, and deference to, the regular order of the Senate, and we recognize that this is an extraordinary request,” they continued. “However, we believe it is justified by the extraordinary scope and scale of the cyber problem. Democrats and Republicans must work together, and across the jurisdictional lines of the Congress, to address this unique challenge.”

Despite the call coming from influential senators from both parties, the effort may be faced with some resistance. President elect-Trump has alluded that the whole concept that Russia interfered with the election is simply an effort to de-legitimize his election victory. Republican leaders may be skeptical on pushing highly-publicized hearings on the matter.

More importantly, Senate Majority Leader McConnell is not warm to the idea of a special committee being formed. He believes the Senate Intelligence Committee – to which Sen. Richard Burr chairs – is more than capable of handling the investigation.

Democrats are saying the Intelligence Committee is not good enough.

“First, things could be left out. There could be holes that no committee covers,” incoming minority leader Schumer stated during a conference. “Second, we could get contradictory information. … And third, the existing committees are very, very busy.”

Supporters of a special committee argue that there is too much overlap between existing committees and conflicting conclusions could be made.

A spokesman for McConnell said the Kentucky senator will consider the Sunday letter sent to his office.