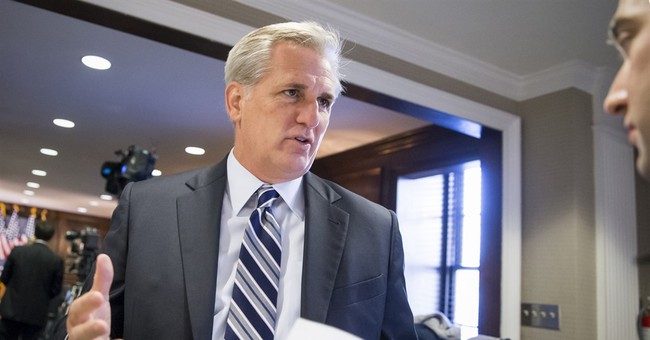 A conference call was made between 80 House Republicans on Wednesday. The meeting, organized by Majority Leader Kevin McCarthy and Whip Steve Scalise, sets to implement a last minute fundraising push to help embattled GOP candidates fighting tough elections. Republicans enjoying the safety of deep-red districts were asked to pony up cash for fellow House members who are not as demographically fortunate.

The aim is to build a “firewall” for vulnerable Republican members. Analysts are predicting the GOP to lose around 10 to 20 House seats come Election Day. Others are arguing Trump’s sinking poll numbers could result in more losses for the GOP. Republicans would need to lose 30 House seats to surrender the gavel to Nancy Pelosi.

While this still seems unlikely. Republican leadership is not taking any chances.

In a climate where more and more GOP House candidates seem to be at risk of losing their elections, the NRCC and its super PAC arm, Congressional Leadership Fund, have been forced to spend money in areas at first thought to be safe.

For example, Rep. Barbara Comstock of Virginia is in the fight of her life in her light-red district. In the closest election of his career, Rep. Darrel Issa of California is battling a shockingly strong Democratic challenger – even losing to him in recent polling.

The situation also does not look gleeful in Hispanic-heavy areas. Districts controlled by Rep. Bill Hurd in Texas and Rep. Carlos Curbelo in Miami are rated as “Toss Up.” Speaker Ryan was campaigning for Curbelo on Wednesday.

Ironically, Pelosi had her own conference call on Wednesday. She told fellow Democrats they are poised to dwindle the GOP majority to less than 10 seats.

Through it all, Republicans still have the edge in retaining the House chamber when the sun rises on November 9.