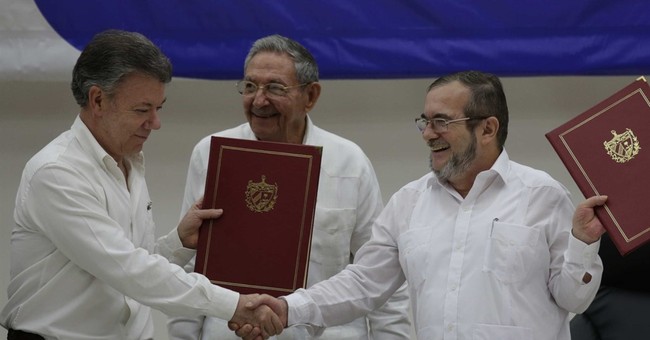 A monumental peace agreement was signed in Havana, Cuba yesterday between the Colombian government and the Revolutionary Armed Forces of Colombia - otherwise known as FARC.

Colombian President Juan Manuel Santos and the leader of FARC, Commander Rodrigo Londono (popularly referred to as Timochenko), agreed to the bilateral ceasefire alongside numerous foreign officials taking part in the ongoing process. This agreement is historic in that it may finally mark the beginning of the end of 52 years of fighting between the Marxist terrorist group and the Colombian government. More details are yet to be agreed upon and President Santos has promised a national referendum to give the Colombian people a final say.

Formed in 1964 by mostly rural farmers as grievances over land ownership boiled over, FARC has waged a war on the Colombian government ever since. The civil war has killed an estimated 22,000 people and has given the country a dangerous reputation for kidnappings. Despite their Marxist-Leninist ideology, FARC has made a killing off the illegal drug trade – their mainstay for financing military operations.

FARC’s hands were basically forced to the negotiating table in 2012 after Colombian forces, with help from the U.S., thinned their numbers by more than half. The agreement includes a demobilization plan for FARC fighters – they will turn in their arms to UN Commission centers - and more political participation for FARC members will be given. Rank and file FARC fighters will be granted amnesty and be expected to return to normal civilian life.

More is yet to be decided and the agreement includes provisions that may be very hard for some Colombians to swallow, but this could very well be the end of decades of bloodshed for the Colombian people.