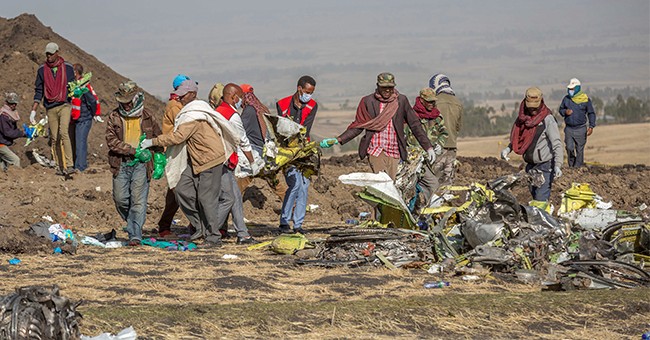 A preliminary report released Thursday states that the pilots in the Ethiopian Airlines 737 Max 8 plane performed all procedures recommended by Boeing before they made their fatal crash.

On March 10, the plane took off from the Addis Ababa airport in Ethiopia on route to Nairobi. While not explicitly stated in the report, Ethiopian Airlines CEO Tewolde Gebremariam said to CNN that the crash might have been caused by the plane’s stabilization system.

“The report does not specifically name the Maneuvering Characteristics Augmentation System, which is a stabilization system,” CNN wrote. “But makes it likely the MCAS pushed the plane into a dive fueled by erroneous angle of attack sensor readings. Boeing is currently working on a change to the system’s software.”

According to the report, the captain and the first officer worked together to keep the plane from nose-diving.

“Although there was three heavy automatic and un-commanded nose dives from the flight control system, in today’s category and today’s terminology it looks like the MCAS was activated,” Gebremariam said.

Despite following orders and striving to protect the passengers, the aircraft crashed just outside of Addis Ababa, killing everyone on board. A team of investigators went to the scene and recovered the plane’s Digital Flight Data Recorder and Cockpit Voice Recorder.

The report showed similarities to what happened to another 737 MAX plane six months prior. The plane made four nose dives before it crashed into the Java Sea. Not one of the 189 people in the aircraft were found alive.

Gebremariam said the report proves that the crash didn’t occur due to incompetence from the pilots, debunking "all the speculators with false allegations."

Boeing is continuing to work on a fix for the flight-control systems on the MAX 8 planes. On March 27,  Boeing executives in Renton, WA showcased the new system, which is, “designed to prevent MCAS from overreacting, and new visual alerts to make pilots aware of potentially dangerous situations,” according to The Washington Post. Boeing CEO Dennis Muilenburg tested the MCAS update in a demo flight Wednesday.

Experienced the MCAS software update performing safely in action during a 737 MAX 7 demo flight. Thanks to our great pilots for taking me up and for the focus on safety. Learn more: https://t.co/w2XaPA1jyS pic.twitter.com/Fe6D7Guolf

"We thank Ethiopia's Accident Investigation Bureau for its hard work and continuing efforts,” Boeing President and CEO Kevin McAllister said in a statement today. “Understanding the circumstances that contributed to this accident is critical to ensuring safe flight. We will carefully review the AIB's preliminary report, and will take any and all additional steps necessary to enhance the safety of our aircraft."