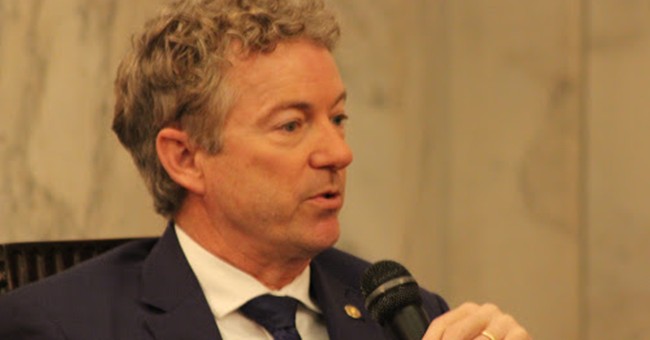 WASHINGTON – Sen. Rand Paul (R-KY) announced Tuesday in the Kennedy Caucus Room that he is working on a new bill to limit the emergency and spending powers of the president.

Paul said he’s looking to gain bipartisan support for his emergency powers act. The bill will remove powers given to the president that Paul said aren’t well-known but “very alarming.” This includes the Communications Act of 1934, which grants the president the ability under a war emergency to take control of “any facility or station for wire communication.”

“It takes over all electronic transmissions and all broadcasts, and the president can do this under emergency,” Paul said. “So it isn’t just the access to the emergency act that’s the problem, that we should change to make it more difficult, we need to eliminate some of the emergencies that we have allowed,” the president to use.

Paul voted against President Trump’s use of emergency powers in March. After Congress passed legislation that provided funding far less than Trump wanted to build a wall along the U.S.-Mexico border, the president made a national emergency declaration to get the billions of dollars required to complete the project.

“I can’t vote to give the president the power to spend money that hasn’t been appropriated by Congress,” Paul said at Western Kentucky University. “We may want more money for border security, but Congress didn’t authorize it. If we take away those checks and balances, it’s a dangerous thing.”

Paul revealed his plans when he and Sen. Tom Udall (D-NM) spoke at “The Future of War Powers” event. They discussed whether the U.S. should get troops out of Afghanistan and end the 20-year war. Paul suggested that there were too many troops set up all over the place as a result of the War on Terror.

“We have 1,000 troops in Mali. We have another 1,000 troops in Somalia,” Paul said. “There are more U.S.-directed attacks in Africa, believe it or not, than the Middle East. Most people don’t this.”

Earlier in March, both senators introduced the American Forces Going Home After Noble (AFGHAN) Service Act, designed to stop the war, provide bonuses to volunteers who were, “deployed in support of the Global War on Terrorism,” and, “redirect the savings from ending the war in Afghanistan to America’s needs at home.”

“My personal belief is we’ve been at war too long and in too many places,” Paul said. “I don’t think there’s a name left of anyone who had anything to do with 9/11.”

The senator believes that the reason the U.S. is going through never-ending war is because Congress gave too much power to the president. He argued for legislators to repeal the 2001 Authorization for the Use of Military Force (AUMF), which allowed the president, “to use all necessary and appropriate force,” against those who were involved in the 9/11 attacks.

“I think the biggest problem we have is that we’ve gotten away from the Constitution,” Paul said. “The Constitution really envisioned that there would be a problem with the executive having too much power.”