Deaths From Meth Use Rising as Mexican Cartels Bring More Into the U.S. 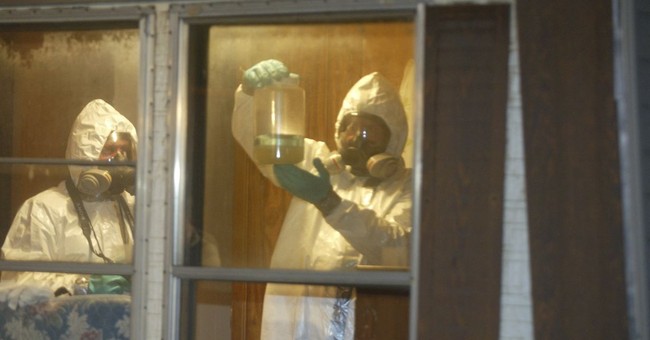 More methamphetamine is pouring into the U.S. through Mexican drug cartels, The Daily Caller reported Monday.

“A drug-tracking system from the Drug Enforcement Administration (DEA),” The Caller wrote. “Indicates that a total of 347,807 law enforcement meth seizures were submitted to various labs across the country in 2017, according to a Wall Street Journal report. The number is a 118 percent hike from 2010 submissions.”

The DEA is concerned that the rising invasion of meth is foreshadowing a crisis similar to the one fentanyl caused over the past decade. Fentanyl, another synthetic drug, killed more than 67,000 people in the U.S. between 2013 and 2017.

“Everybody’s biggest fear is what’s it going to look like if meth hits us like fentanyl did,” Jon DeLena, a member of the DEA’s New England office, told Wall Street Journal.

The Caller added that in 2016, nearly 7,000 people died from meth abuse, according to the Centers for Disease Control and Prevention (CDC).

Their report reveals that many overdose deaths involve more than one substance. The Partnership for Drug-Free-Kids wrote that this makes it challenging for first responders to save people when it happens.

Members of the DEA put the blame on Mexican drug cartels for importing large amounts of meth, competing against cocaine imports from South America.

The rise of meth and the drug crisis as a whole is one of the big factors fueling the Trump administration’s push for border security.

"We have a very, very strong country economically.  And people (from the other side of the border) come up, to a large extent, for that reason," Trump said last Wednesday. "But we’re having tremendous amounts of meth, cocaine, heroin, and ultra-lethal fentanyl.  That’s literally ultra-lethal.  It gets stronger."

Though Congress approved 55 miles of border fencing, the president vetoed the branch’s attempt to stop his national emergency declaration. The question remains if Trump’s national emergency is constitutional. Attorney General Bill Barr argued last Friday that it is, but Trump predicted that the Ninth Circuit Court will strike down the declaration before it goes to the Supreme Court.