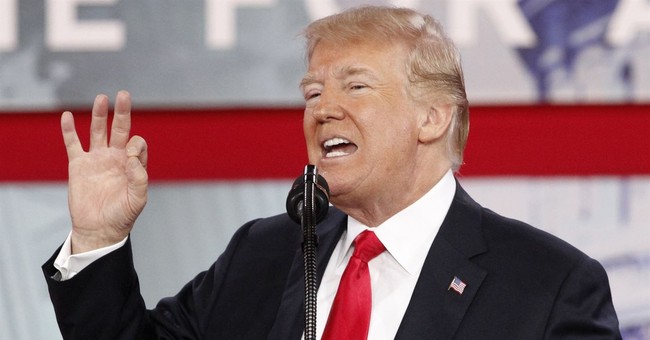 You can’t watch a Donald Trump speech at CPAC without the echoing sounds of Republican voters laughing, chanting and cheering along the way. If there’s one thing the former TV celebrity knows how to do, it’s how to put on a show. We don’t know if we’ll see him again this year, but while we wait for the announcement, let’s dive into some of the president’s best moments at CPAC.

“What a nice picture that is. I love to watch that guy speak,” Trump said during his speech in Oxon Hill, Md. The president looked at a projected image on himself when he noticed a pink gap surfacing from the back of his blonde coiffure.

Trump turned his head away from the audience, styling his hair with his hands, as he revealed a bigger threat to his image than any scandal the Democrats could muster up.

The audience roared in uncontrollable laughter when they bore witness to the bald spot.

Back in Feb. 2018, Nikolas Cruz shot and killed 17 people with a semi-automatic rifle at the Marjory Stoneman Douglas High School in Parkland, Fla. The Parkland police division was heavily criticized for their response to the crisis. Sgt. Brian Miller, who was the highest-ranking officer on the scene during the shooting, seemingly failed to act according to Bob Gualtieri, the high school’s Public Safety Commission chairman.

“He sat up on Holmberg Road for 10 minutes,” said Gualtieri. “He heard gunshots and he didn’t move. He never got on the radio. He was the first supervisor on the scene, and he never moved, even after deputies and officers were going into that building.”

Trump mentioned the shooting at CPAC 2018.

“It’s time to make our schools much harder targets for attackers,” he said.

“Well trained gun-adept teachers and coaches and people that work in those buildings; people that were in the marines for 20 years and retired, people in the Army, the Navy, the Air Force, the Coastguard. People that are adept, adept, with weaponry and with guns, they teach.”

Trump said that he wants 10 or 20 percent of teachers to protect their students and to have a concealed-carry permit. He stated that if the shooter knew there would be people that could fire back at him, and if the school didn’t establish itself as a “gun-free zone,” he wouldn’t have attempted to attack the school.

“These teachers love their students. And these teachers are talented with weaponry and with guns,” Trump said. “…and a teacher would have shot the hell out of him [the shooter] before he even knew what happened.”

It wasn’t the first time Trump expressed his distaste for the press and it wouldn’t be the last. But regardless, the fake news media is a subject that you can’t see a Trump speech going without.

At CPAC 2017 in National Harbor, Md., Trump reminded his audience that he called the fake news, “the enemy of the people,” because he said that news groups were spinning the story by claiming that he was against the news industry in general.

Trump said he believes that the fake media shouldn’t be allowed to just say that they have sources. He said that they should be required to put the name of their source in the article in order to prove their story is accurate.

“They have no sources,” Trump said. They just make them up when there are none.”

Trump continues to fight the Democrats in Congress for a strong border wall, a goal which he set since the beginning of his presidential campaign. He promised his audience at CPAC 2017 that he was continuing to work on building a barrier to protect the nation.

Without a wall, Trump emphasized that America will continue to be exposed by foreign dangers, including a drug crisis and a shortage of cash that could be used to help inner cities and other struggling communities in the U.S.

“And we’ll stop it,” he said. “We’ll stop drugs from pouring in to our nation and poisoning our youth.”

Trump also promised that stronger border security will save many American lives from gang members and other threats.

“As we speak today,” Trump said. “The immigration officers are finding the gang members, the drug dealers and the criminal aliens, and throwing them the hell out of our country. And we will not let them back in. They’re not coming back in, folks.”

Trump wouldn’t take a step forward into the presidential race until 2015, but he expressed interest in politics when he appeared as a surprise speaker at CPAC 2011 in Washington. It was the first time Trump spoke at a CPAC event.

There were some issues that Trump said he would tackle that ended up becoming a reality, like preventing taxes from getting higher. There were some that didn’t, like his promised to get rid of and replace Obamacare. But the speech serves as a fascinating timepiece foreshowing the future of his presidency and of the modern political battlefield.