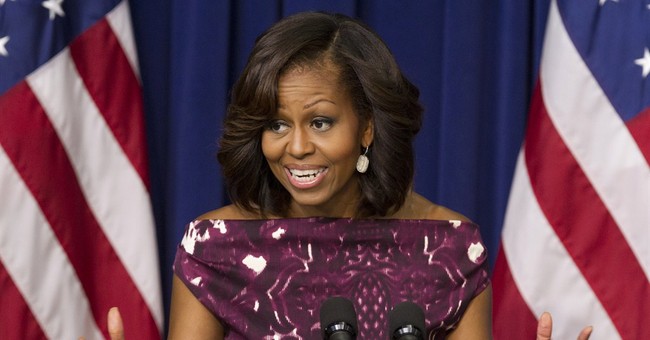 Just a week after the First Lady announced a new push to promote water consumption, a large group of food and media companies met at the White House to discuss tactics of how to get kids to eat healthy foods. Not surprisingly, it seems Mrs. Obama has had a bit of trouble promoting this initiative on her own and is now looking to corporate friends to help her rid schools of obese children.

At the event, which was largely closed off to media, Michelle Obama made remarks on how these companies need to use their “magic” in marketing to sell healthy foods instead of junk foods. She attempted to reach them by saying, “You all can sell just about anything to our kids…And if anyone can get to our kids to eat their vegetables, it’s all of you”.

Hmm. Yes. Please brainwash our kids to buy your products!

And isn’t it funny how now all of a sudden the White House thinks that the private sector may be of some use to them? What happened to big government? Oh right, Mrs. Obama had some trouble convincing kids to eat disgusting healthy foods that were being forced upon them at school. So now we need to tell them via TV commercials and other advertising channels that vegetables are yummy. WOW.

Last year an attempt to create voluntary standards on food marketing to kids failed, and the White House publicly stayed out of the debate, even though this was an integral part of the First Lady’s initiative. But I guess Michelle has reignited her push for fewer obese children with the new drink more water push.

So come on private industry, in the words of the First Lady, “do even more and move even faster to market responsibly to our kids”!