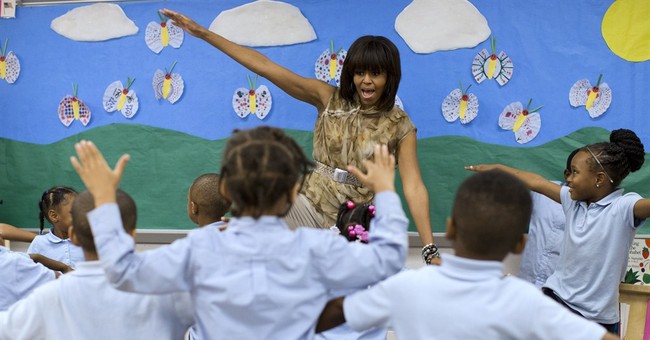 There is no more denying the fact that Hollywood has a friend in the White House. But it may not be who we originally thought. No it’s not the president, but instead it is First Lady Michelle Obama. There are several instances of the Obamas palling around with the Hollywood elite, but now we see Mrs. Obama trying to get into that world! Michelle Obama is releasing a rap album.

Michelle Obama is teaming up with some big names in hip hop to help release a Let’s Move! themed album next month.

Entitled “Songs for a Healthier America,” the record features video cameos (but no singing) of the first lady along with big names like Jordin Sparks, Ashanti, Run DMC, Doug E. Fresh and Monifah.

The 19-track album with song titles like “U R What You Eat” and “Veggie Luv” is being released by the Partnership for a Healthier America, an independent group found in conjunction with Let’s Move.

Ten music videos released with the album are set to be distributed to schools in New York City before being circulated to other major cities.

Rap? Really? A genre known for its demeaning lyrics towards women and inappropriate language, a rap album really could not have been a worse choice for the First Lady. And although she won’t actually be singing on the record, she will be in the videos. Have you all seen some of those rap videos? Last thing we need to be thinking about is Michelle Obama in a rap video trying to help obese children lose weight.

This is just completely over the top, even for Michelle Obama.