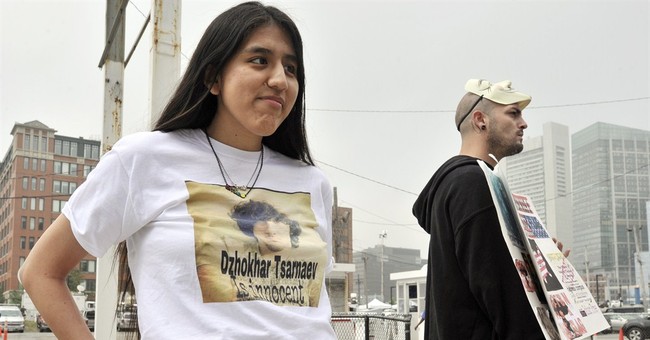 Back on a fateful Patriots' Day this year, in the city of Boston, a terrorist attack targeted the Boston Marathon. The attacks killed 3 people and wounded hundreds more. In the several days following the attacks a massive manhunt took place to try and find the perpetrators of the crime, and eventually the American public was informed a pair of brothers was responsible. One brother was killed in the process and the other was taken into custody. Dzhokhar Tsarnaev, known as Jahar, is that surviving brother and he had his first day in court today.

Somehow, there are people who still support Jahar and don’t believe the FBI tracked down the right bomber. According to CBS Boston:

A group of about a dozen supporters cheered as the motorcade carrying Tsarnaev arrived at the courthouse. The demonstrators yelled “Justice for Jahar,” as Tsarnaev is known. One woman held a sign that said, “Free Jahar.”

“I’m here to show Dzhokhar support, to let him know there are thousands of people worldwide that do believe his innocence,” Mary Churback of Freetown told WBZ-TV news.

Lacey Buckley, 23, said she traveled from her home in Wenatchee, Wash., to attend the arraignment. Buckley said she has never met Tsarnaev but came because she believes he’s innocent. “I just think so many of his rights were violated. They almost murdered an unarmed kid in a boat,” she said.

Brittney Gillis, a student at the University of Massachusetts-Dartmouth, where Tsarnaev attended, came to the courthouse because she wanted to see the suspect. She said he used to walk her friend home in the evenings because he was worried about her being alone.

“He would walk her from the campus library to her dorm at night,” she said.

Also, following the attacks a fan club for Jahar was initiated. This was mostly a group of teenage girls who thought Tsarnaev was attractive. But the movement took off:

Using the hashtag #freejahar, as well as handles -- like @FreeJaha, @Fighting4Jahar or @PrayForJaharr -- that contain Tsarnaev's nickname, the suspect's supporters are easy to find online.

According to Yahoo! Shine, fans have made bracelets, and the phrase "too pretty to be guilty" is becoming a common refrain.

Is it just me, or is this deeply concerning? We currently have people living in this country who support a BOMBER! What is going on? And where are the parents of these young girls who are making bracelets and showing up at a courthouse to support a murderer? As someone who calls the city of Boston home, I am extremely upset by this. No one should be out there supporting a terrorist.