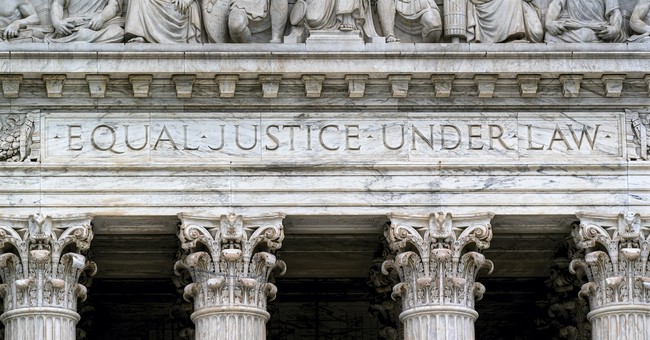 You may have heard somewhere along the way that the late Supreme Court Justice Ruth Bader Ginsburg, a leftist icon, was a critic of the Court's controversial 1973 Roe v. Wade decision. She was, without question, a strong proponent of legalized abortion – but believed that Roe itself was "too sweeping and vulnerable to attacks," as a New York Times piece put it last year. More context:

Ruth Bader Ginsburg wasn’t really fond of Roe v. Wade, the landmark Supreme Court decision that in 1973 established a constitutional right to abortion. She didn’t like how it was structured. The ruling, she noted in a lecture at New York University in 1992, tried to do too much, too fast — it essentially made every abortion restriction in the country at the time illegal in one fell swoop — leaving it open to fierce attacks. “Doctrinal limbs too swiftly shaped,” she said, “may prove unstable.” ... Justice Ginsburg “believed it would have been better to approach it under the equal protection clause” because that would have made Roe v. Wade less vulnerable to attacks in the years after it was decided

Constitutional arguments against her preferred structure also exist, of course; the point is that the way seven justices on the all-male Court decided to conjure a national right to abortion didn't sit well with RBG. Among progressive legal experts, she was not alone. Someone with similar sentiments is Yale Law School professor Akhil Amar, a self-described liberal who is pro-choice on abortion policy. Writing in the Wall Street Journal, Amar refutes some of the more hysterical arguments and warnings emanating from the left in the wake of the recent, shocking SCOTUS leak indicating that the Court is about to invalidate the Roe precedent in a forthcoming ruling:

The Supreme Court’s 1973 opinion in Roe v. Wade, written by Justice Harry Blackmun, is similarly ripe for reversal. In the eyes of many constitutional experts across the ideological spectrum, it too lacks solid grounding in the Constitution itself, as Justice Alito demonstrates at length in his leaked Dobbs draft...In Roe, the Court did not even quote the constitutional language it purported to interpret in handing down its ruling—the Due Process Clause of the 14th Amendment. That clause holds that the government may not deprive any person of “life, liberty or property, without due process of law”—that is, without fair legal procedures, such as impartial judges and juries, defense attorneys and the like. The Texas abortion law at issue in Roe in fact provided for fair courtroom procedures, which made the decision’s “due process” argument textual gibberish.

Constitutional history also cut hard against Roe. When Americans adopted the 14th Amendment in the 1860s, almost no one thought it barred laws against abortion. Virtually every state back then prohibited abortions. Roe likewise ran counter to state laws still on the books almost everywhere in the 1970s. The opinion clumsily cited various earlier precedents involving “privacy” rights related to contraception and erotic expression, but in a devastating concession, the Roe Court admitted that the presence of a living fetus in abortion scenarios made the matter “inherently different” from all previous privacy cases. And Roe said nothing, amazingly, about the relationship of abortion rights to women’s equality.

Professor Amar also takes on "slippery slope" admonitions from some progressives who argue that the High Court will soon move to strike down other major rulings:

Does Justice Alito’s draft, as many are now claiming, inflict collateral damage on other areas of constitutional case law, such as the Warren Court’s precedents on contraception and interracial marriage? It does not. In fact, the Dobbs draft reinforces these iconic opinions by explaining why they were right—namely, because the freedoms recognized in these cases were “deeply rooted in the Nation’s history and tradition.”...In the 1972 case of Eisenstadt v. Baird, the Court extended Griswold to invalidate a Massachusetts statute that banned the distribution of contraceptives to unmarried individuals. By then, such laws were fast becoming outliers in America, rarely enforced even if on the books. Today, no state or political party is seriously trying to undo this precedent. In his 2006 Senate confirmation hearings, Justice Alito, a traditionalist self-consciously in the Harlan mold, minced no words on the issue: “I do agree with the result in Eisenstadt.” His leaked draft opinion in Dobbs says much the same thing. Justice Alito has never said anything remotely similar about Roe. For traditionalists, there is an essential difference between the contraception and abortion cases. Whereas the Court in Griswold sided with 49 states against the outlier Connecticut, the Court in Roe invalidated the laws of at least 49—perhaps all 50—states. The Dobbs draft takes pains to cite this stunning fact.

And here's his analysis of Dobbs' likely impact on LGBT rights precedents (others have also argued persuasively that changes in abortion jurisprudence will not seep into other realms):

Perhaps surprisingly, the draft’s logic also buttresses certain important LGBT rights. As the Court emphasized in its landmark ruling in Lawrence v. Texas (2003), which invalidated anti-sodomy laws, such laws were almost never enforced in America against private consensual conduct, but rather only in cases of rape or public indecency. Justice Anthony Kennedy’s majority opinion reported that only 13 states at the time still had laws prohibiting consensual adult sodomy and only four states singled out same-sex sodomy. Even in these outlier states, there was “a pattern of nonenforcement with respect to adults acting in private.”...The status of same-sex marriage is obviously changing, however, and such unions are fast becoming a pillar of modern American life. Every year, same-sex marriage, unlike abortion, becomes more widespread and accepted—more deeply rooted and less controversial. And crucially, Obergefell is at heart a gender equality case.

Read the professor's full piece for a more complete look at the nuances of his arguments. Here's his overall conclusion (emphasis mine): "I am a Democrat who supports abortion rights but opposes Roe. The Court's ruling in the case was simply not grounded either in what the Constitution says or in the long-standing, widely embraced mores and practices of the country. Perhaps I'm wrong in thinking that, and perhaps the Dobbs draft is wrong too. But there is nothing radical, illegitimate or improperly political in what Justice Alito has written." Polling has shown a large majority of Americans opposed to overturning Roe, but with solid majorities also favoring significant abortion restrictions not permitted under the current Roe (1973) / Casey (1992) regime. As Rebecca noted over the weekend, this apparent contradiction is rooted in a widespread misunderstanding – addressed below by pollster Scott Rasmussen – which was dishonestly seeded for years, that toppling Roe would mean a blanket nationwide abortion ban would come into effect:

Voters don’t know what overturning that decision would mean. Seventy-seven percent of voters mistakenly think it would make abortion illegal in the United States...Just 22 percent have some understanding of the issue. If people don’t understand what overturning Roe would mean, how can you possibly interpret polling data showing that people don’t want it overturned? To get a true sense of public opinion, it’s necessary to ask polling questions without D.C. political jargon. When you do that, it becomes clear that most voters will be okay with the result of overturning Roe. With Roe in place, the abortion laws are set by judges. However, 65 percent of voters think abortion laws should be established by voters and their elected representatives. That’s exactly what will happen if Roe is overturned. Just 18 percent want to preserve the status quo.

If and when such questions are returned to the people's representatives, then what? Relatively few Americans favor expansive bans, but substantial restrictions are popular. Rasmussen continues:

[Senate Democrats'] bill would make abortion legal at any point during the pregnancy, up to the moment of birth. That extreme position, now embraced by President Joe Biden, is supported by only 17 percent of voters. The vast majority — 72 percent —reject that extreme position. Thirty-eight percent of respondents believe abortion should be legal only in cases of rape, incest, or when the life of the mother is at risk. Thirty-four percent believe abortion should be legal only during the early stages of a pregnancy, and not later than the end of the first trimester. The proposed legislation would also bring an end to the Hyde Amendment and calls for the taxpayer funding of abortions. Just 30 percent of voters support such funding. The legislation would prevent states from imposing modest restrictions on abortion, which have strong public support. Three-day waiting periods, spousal notifications, and parental notifications are each supported by 62 percent to 69 percent of voters.

We've cited other recent polling, including from Fox News, showing majority support for state-level bans on most abortions after six and 15 weeks. NBC's latest survey, which contains other bad news for Democrats, shows stronger support for legal abortion, but still with only a small minority of the electorate embracing Democrats' radical "unlimited-elective-abortion-on-demand" stance. The state of Colorado just enacted an extreme law along those lines. The Democratic governor defended the new measure, affirming that it would allow abortions all the way until the moment of birth. He framed the issue as one that should be determined by women's "hearts and minds," not "the laws of men." I'll therefore make male Gov. Jared Polis aware of a new YouGov poll showing roughly two-thirds of women supporting the 15-week ban policy (somewhat liberal by international standards) passed by Mississippi, at issue in SCOTUS' Dobbs case:

YouGov: ~2/3 of American *women* favor a 15-week abortion ban, which is Mississippi’s law, at the heart of the Dobbs case before SCOTUS. It is LESS restrictive than many European abortion laws. Virtually no gender gap. Women slightly more supportive of the limitation than men. https://t.co/CXd3ojMxF0