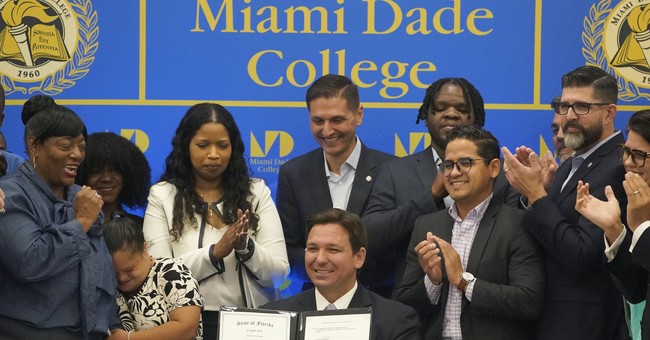 Let's start with some public opinion data. The big caveat here is that the "newer" poll featured below was conducted in early March, so its findings are a bit outdated – and a lot has been happening in Florida over the past month-plus. So it will be interesting to see if these numbers shift in the next installment of this series. But it's undeniable that Gov. Ron DeSantis entered the choppy waters of recent controversy in a very strong position, ahead of the November elections:

The St. Leo survey shows DeSantis' overall approval rating at 59 percent, identical to his support on the issue of handling COVID. When even MSNBC panels are glumly conceding that Florida has done pretty well during the pandemic, you know The Narrative has officially flopped. Let's face it: There's no way DeSantis is going to win by 16-24 points in the fall. Democrats will "come home" and things will tighten. But it does seem possible that he could win very decisively – a victory margin of six or more points is tantamount to a Florida blowout. Let's see how things look when a new batch of polling rolls in. Maybe the giant, high-profile, nationally-covered culture war battles will dent DeSantis' gaudy numbers a bit (he has plenty of cushion, it seems). Or maybe...not. Regardless, things have been busy. Charles Cooke, arguing further against the Florida GOP's retribution against Disney (I offered some additional thoughts over the weekend), takes note of the list:

These came on the back of him standing up to everyone during the pandemic, and exhibiting a completely different approach nationally. On all of these real things, he won. As a Floridian, I’ve been thrilled. After all this, he did something else that is, frankly, tangential. (2)

Another move that has generated criticism from the media and progressives is Florida's decision to bar certain textbooks from public school curricula. Why, critics asked, did the state reject so many math textbooks, of all things? Here's how DeSantis responded last week:

We don't have all the information, but it seems like at least some of them were straying from core learning or gratuitously injecting identity and politics into math lessons:

This stuff really does sound like some touchy-feely BS that should be left out of textbooks, not for any especially political reason. https://t.co/IIvYkhzTbO pic.twitter.com/dFhU4pm2Af

I’m reading this NYT deep dive into the books that FL rejected from their math curriculum and it’s only making me think that FL actually did a good job vetting. This admits the books have a lot of nonsense than has little to do with teaching kids math. https://t.co/czeDhKPVN1

The Florida Department of Education has released examples of what it calls “problematic” material that led it to ban dozens of math textbooks — including a lesson with an algebra graph measuring racial prejudice. The DOE rejected 54 math textbooks – about 41 percent of publisher submissions — for content that officials said tried to “indoctrinate” students or expose them to “dangerous and divisive concepts.” Facing a slew of requests to share examples of what led to the bans, the department posted four photos of math problems on its website Thursday. “What? Me? Racist?” says a lesson titled “Adding and Subtracting Polynomials.” “More than 2 million people have tested their racial prejudice using an online version of the Implicit Association Test. Most groups’ average scores fall between ‘slight’ and ‘moderate bias, but the differences among groups by age and political identification, are intriguing,” the problem states...Another problem involves graphs that supposedly measure levels of racial prejudice and are broken down by age and political identification. They were based on the Implicit Association Test, as was the polynomials lesson, although it wasn’t clear if both problems were from the same rejected textbook. A third posted lesson said its objective was for students to “build proficiency with social awareness as they practice with empathizing with classmates.”

Some of that certainly sounds politicized, doesn't it? I'll leave you with three additional polls beyond Florida that point to the very precarious position in which Democrats find themselves:

Very possible Hassan gets toppled by [That Guy] simply because Democrats are just that toxic nationally. https://t.co/SkaKDCcwyx

JUST IN: For the first time in their polling history Echelon insights has Republicans leading Democrats by 2 POINTS on 2022 Congressional Generic Ballot: 47/45 (R+2)

And this is a big "gulp" moment for the ruling party:

COOK POLITICAL REPORT: "No Democrat in a single-digit Biden (or Trump-won) district is secure." pic.twitter.com/Ht415cbXXP