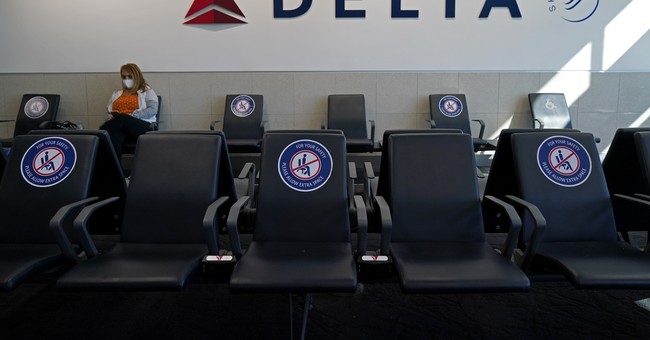 Blue Twitter -- including many of the blue checkmarks, of course -- has been very excited about this polling result since it was released yesterday.  They'd spent the previous 36 hours or so melting down over a federal judge throwing out the government's mask requirements for public transportation, including trains, airplanes, airports, etc.  Then the Associated Press published a survey showing that a clear majority of the American people wanted the jettisoned policy to remain in place, and it's been shared far and wide:

The poll finds that despite vocal opposition to the requirement, 56% of Americans favor requiring people on planes, trains and public transportation to wear masks, compared with 24% opposed. https://t.co/qyMLZr8NZ9

When White House Press Secretary Jen Psaki, who called the judge's decision 'disappointing,' was asked about the many videos floating around of passengers cheering after being informed of the new mask-optional policy, she said those 'anecdotes' did not constitute data.  The poll, by contrast, is data.  The Biden administration has been all over the map in its response to the ruling, sending mixed signals on several fronts, including whether they'd seek to have it overturned.  Biden himself even shrugged that mask-wearing on planes is now an individual choice.  It looked like they'd settled on a footing that officially opposes the decision, will seek to challenge it, but will not seek to have its effect immediately reversed.  This appears to be an attempt to placate the irate leftist base without infuriating much of the traveling public, but now they've "followed the science" and are appealing.  Which brings me to my analysis of the poll. It would be easy for me to simply say that I don't believe its results.  Let's just set that aside.  It doesn't matter what I believe.  Let's see how people actually behave in real life, and what Democrats believe:

Cool. If true, they can all keep masking on airplanes. And we’ll see majorities still masking by choice. https://t.co/Fbme8Be6Ax

I strongly strongly urge the WH to aggressively challenge this judge’s decision & Democrats to campaign on the mask mandate’s reimposition. Hold floor votes on it. It would be a +22 issue for them, based on this survey. Blue Twitter is abuzz. Go for it! https://t.co/9eFYHWx5Bd

As I say, go for it.  If the poll is accurate, there will be some griping from one-fourth of the country, but everyone else will break into grateful applause as the forced masking is yanked back into effect.  By all means, let's test that proposition, pronto.  Let's recall that the airline industry has been begging the Biden administration to ditch the mandate, citing air circulation technologies that have helped prevent super-spreader events on commercial flights.  Let's also recall that when the Senate voted on ending the transportation mask requirements more than a month ago, the measure passed 57-40.  And consider anecdotes, not data, like this, via a former MSNBC producer:

Merits of the judge’s ruling aside—and this probably goes without saying—but the online debate appears to be out of sync with reality: Pretty clear majority of travelers on my flight, entire flight crews, and people at EWR & MIA were not wearing masks yesterday.

Outraged Americans should be scrupulously masking up en masse, showing that no matter what a judge has decided, they are going to do the "safe" thing.  After all, that's what the poll showed, no?  And politicians, especially from the party expected to get hammered in a few months, should be mobilizing to capitalize on this big opportunity to score points with the voting public, right?  If we're not seeing those things happening on a massive scale, perhaps that's an indication that the poll above doesn't quite reflect reality the way some people want to believe it does.  Meanwhile, can someone please kindly inform these people that they are more than welcome to continue masking?  The lack of a mandate is not the same as a ban, for crying out loud:

Wearing my mask no matter what non-scientists tell me I can do. pic.twitter.com/qel4mAG9H5

I don’t give a damn what some grossly unqualified Donald Trump judge said, I’m double masked and wearing goggles on this Nashville to DC flight. I had COVID in December. Y’all can KISS MY ASS about me not wanting it again. And any fool saying they don’t matter is a damn liar. pic.twitter.com/cHJ9oUYWo4

Someone might try to gently explain to Mr. Martin that his vaccines plus a recent infection very likely render him quite safe from re-infection at this time, thanks to fresh hybrid immunity, but I'm not sure he's a big science guy. A big 'Science' guy, sure, but that's different.  And someone may ask Ms. Jarrett why some recent indoor settings were perfectly fine as non-masking venues for her, but I suspect the answer boils down to about tribalist, performative signaling more than anything else.  Speaking of, here's New York City's Mayor, wearing a mask outside (he famously doesn't wear one indoors much of the time -- science!), saying that subway riders should still be made to wear masks:

“We should still have masks on the subway system. New York is unique. We are densely populated.” pic.twitter.com/8wFtHzlbtE

Then there's this anti-science, harmful lunacy:

students were able to choose to wear a mask for one day. pic.twitter.com/QHcWQFwsHI

I'll leave you with these responses to critiques from public health experts.  And with due respect to Doctors Gottlieb and Adams, I tend to agree with the responses:

The problem is that they CDC has repeatedly shown it can’t be trusted with these powers. It was never clear they had the authority, but people were more willing to look the other way mid-pandemic. Now it’s time to reinforce that they need Congressional authority for this stuff. https://t.co/Y6PP1dkqwo

But an unelected federal agency should have the power to vastly restrict Americans' liberties without any direction from Congress? https://t.co/OoO4OfkEar

Part of the credibility problem here, quite frankly, is exemplified by Adams framing the lack of a mask mandate on airplanes as 'endangering the lives' of children.