NYT: Why, These Republicans are Echoing a Qanon 'Conspiracy Theory' in KBJ Confirmation Hearings 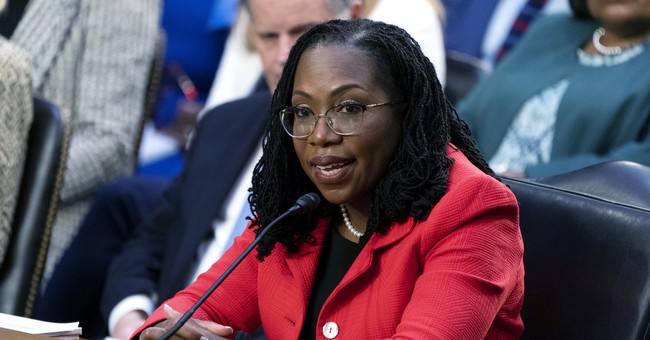 It's day three of Judge Ketanji Brown Jackson's confirmation hearings, and with Tuesday's questioning still underway, progressives quickly started pronouncing themselves appalled by Judiciary Committee Republicans' conduct. Many of these people are the same leftists – many journalists included – who participated in or rooted for the disgraceful smear mob against Brett Kavanaugh in 2018. To this day, many of them continue to insist that Kavanaugh was "credibly accused" of sexual assault, which is untrue. As many of us have been compelled to assert over and over again, there was and is literally no evidence implicating Kavanaugh in any sexual impropriety whatsoever:

A totally uncorroborated claim is not evidence. Noteworthy that BK accuser’s star witness & own father do not believe her 100% unproven claim. FBI probe turned up evidence of witness tampering by accuser’s allies, who have also admitted political motives. Facts.

"accurately recalled who he was hanging out with" -- she named four people that were allegedly present the night of the assault, none of whom backed her story, including her lifelong female friend. No one can produce any evidence she ever even met Kavanaugh. https://t.co/LqOobBHOaG

They will never stop lying about the (total lack of) evidence against Kavanaugh and ignoring the fact that his only allegedly "credible" accuser's claims are disbelieved by both her own father and her star "witness" – who told the FBI that she was pressured to lie in order to hurt Kavanaugh. So we will never stop setting the record straight. Demands for decorum and respectful treatment of nominees ring hollow from people who prominently refused to practice what they preach. The self-discrediting hypocrisy and gall of some of these people is truly astonishing:

funny how that works pic.twitter.com/5ZijQfr3YC

Which brings us to the latest partisan hatchet work by The New York Times. Republicans have been asking Judge Jackson about a host of issues, including some of her sentences meted out for people convicted on various charges, including those related to child pornography. Regardless of whether one thinks this line of inquiry and criticism has merit, the questions relate directly to her body of work as a judge and within the criminal justice system. Such topics are fair game. Andy McCarthy, a conservative former federal prosecutor who opposes Ketanji's nomination, believes that the child porn gambit by Senators Cruz and Hawley is unfair and misleading. He spelled out why in a detailed column. An excerpt:

I want to discuss the claim by Senator Josh Hawley (R., Mo.) that Judge Jackson is appallingly soft on child-pornography offenders. The allegation appears meritless to the point of demagoguery...Judge Jackson’s views on this matter are not only mainstream; they are correct in my view. Undoubtedly, Jackson — a progressive who worked as a criminal-defense lawyer — is more sympathetic to criminals than I am. If I were a judge, I’m sure I’d impose at least marginally more severe sentences than she has. (Contrary to Hawley’s suggestion, however, she appears to have followed the guidelines, at the low end of the sentencing range, as most judges do.) ... Plenty of hard-nosed prosecutors and Republican-appointed judges have long believed that this mandatory minimum is too draconian. Moreover, judges and prosecutors generally need no convincing to enforce the harsher mandatory minimums that Congress has prescribed against hands-on child abusers and producers of child pornography. But the receipt and distribution sentencing provisions are so heavy-handed that judges and lawyers end up engaging in the unsavory practice of “fact-pleading” — i.e., ignoring facts that suggest the defendant was up to more than simple possession in order to avoid triggering the mandatory minimum. That is an abuse of process, but it allows for a reasonable sentence, which may well be a non-prison sentence, with the proviso that it could turn into prison if the offender recidivates.

On my radio show yesterday afternoon, he reinforced his point:

Agree or disagree with McCarthy (the Democratic chairman of the Judiciary Committee, Dick Durbin, has quoted him approvingly on this point, perhaps for the first and last time), pressing a nominee on her record isn't out of bounds. It isn't a beyond-the-pale personal attack. If anything, it's at least evidence of notably normal ritual in SCOTUS hearings: Senators grandstanding, with some partisans advancing dubious or exaggerated criticisms against a nominee they don't want to see confirmed. But Democrat-aligned journalists at The Times decided that these questions must be linked to QAnon, and that the term "conspiracy theory" should be invoked:

Tying very legitimate line of questioning about Judge Jackson's record on sentencing child sexual abusers to QAnon is one thing when it's coming from a lazy White House comms team.

It's another when it's coming from the New York Times.

This is just shameless gaslighting:

If the NYT is interested in actual conspiracy theories advanced in the context of scotus hearings, perhaps their investigative team can do a deep dive into the embarrassing ramblings of Sen. WhiteClub (D-RI). pic.twitter.com/YfHMEdcTpv

If you're unfamiliar with the "WhiteClub" reference, familiarize yourself here. And if you'd like to learn more about this senator's various conspiratorial humiliations – by which journos rarely if ever seem remotely bothered, presumably because they're on behalf of "the cause" – read these two pieces. I'll leave you with this howler:

Senator Whitehouse: Judge Jackson "came to us not through a dark money funded turnstile, but through a fair and honest selection process." pic.twitter.com/cRnFKygs7r

The Supreme Court is not bought and paid for by "dark money" special interests on either side, despite the senator from Rhode Island's flogged-to-death hobby horse. Judge Jackson herself slapped down that actual conspiracy-mongering. But left-wing dark money groups have absolutely backed this nominee, some pushing her before she was even named. Democrats like Sheldon Whitehouse don't actually care about "dark money" in politics (Democrats have taken the lead in dark money spending); they care about conservative money in politics. It's that simple. SCOTUS confirmation fights are often an occasion for a torrent of utter hackery, and this relatively ho-hum, low-octane example is no exception. For what it's worth, my predictions about how this particular battle would play out are standing up rather well thus far. I'd bet that they continue to stand up over the coming days, too.