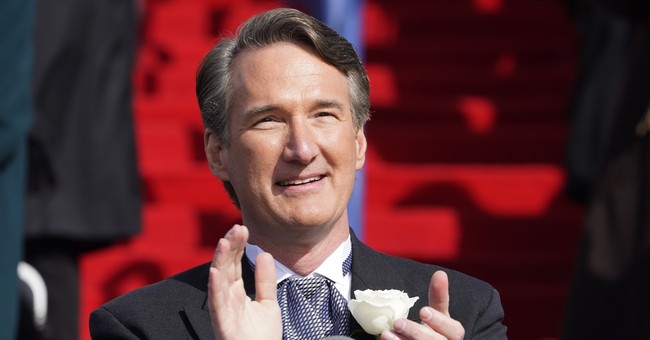 Note well that this was the Democrat-controlled Virginia State Senate.  We mentioned yesterday that the same chamber voted in favor of a pro-optional school masking amendment by a shocking bipartisan margin, 29-9, a blowout.  The new vote, by contrast, was on final passage of the underlying bill -- and despite holding a 21-19 edge, Virginia's Senate Democrats couldn't hold the line.  Two of their members defected to the GOP side, and the bill passed:

Virginia Senate passes bipartisan bill requiring in-person education and taking mask decisions out of political bodies and back in the hands of parents. Vote 21-17. Now on to the House, where it is expected to pass quickly. pic.twitter.com/9SCADAnW5V

This move doesn't merely enshrine mask-optional schools in the state, robbing leftist 'resistance'-minded school boards of a core legal argument as they seek to ignore the governor's Executive Order on this subject.  It also establishes that "virtual" learning days (a dreadfully failed experiment) will not count toward state-required instruction days.  In-person instruction is mandated.  Excellent news.  The measure will sail through the GOP-held lower house, and Gov. Glenn Youngkin is poised to sign it into law:

I promised that as governor, Virginia would move forward with an agenda that empowers parents on the upbringing, education, and care of their own children. I am proud to continue to deliver on that promise.

"This vote also shows that school boards who are attacking their own students are stunningly detached from reality," he added. "It’s time to put kids first and get back to normal."  Stunningly detached from reality is right.  Those officials may want to brush up on the data, and read the room, to borrow a phrase.  It gets better: Youngkin now reportedly plans to invoke an emergency power to expedite implementation of the new law, making it effective immediately.  I'm told that only a simple majority in each chamber is needed to achieve this, and Republicans are confident they'll have the votes to do so.  In an interesting twist, it used to take a supermajority vote to approve this type of action by the governor, but Democrats got rid of that threshold when their side was in charge, so now the GOP will take advantage of the other party's previous power grab.  Funny how that works.  Virginia Republicans are hoping to have the whole thing done, dusted, and in place in a matter of weeks.

If and when they succeed, Virginia's optional masking in schools will be the law before New Jersey's statewide mandate goes away -- which has been arbitrarily delayed by a month, and will not require local districts to allow parents leeway to make these decisions for their own children.  New Jersey's governor cannot explain why school masking has 'worked,' which is his position. As for Virginia, this seems like a noteworthy accomplishment that could be highlighted in front of a wide audience if the GOP asks Youngkin to deliver their State of the Union response, preferably in front of a crowd.  Relatedly, here's Jen Psaki reiterating the White House's position that schools should follow science-free CDC guidance and force children to wear face coverings in classrooms:

She hastens to point out that a substantial number of voters tell pollsters that they want to keep masking.  To which I say: Fine. Let them.  Stop forcing that choice on others, especially children.  These are not mask bans.  Take note of her tone regarding blue states rolling back restrictions and offering new flexibility.  That's a far cry from how the administration has treated red states who've done the exact same thing, just earlier.  The science, and the CDC guidance, hasn't changed.  The politics have.  On that score, I'll leave you with this flashback to President Biden's 'neanderthal' attack against Texas when Gov. Greg Abbott lifted restrictions nearly a year ago:

Would Biden care to offer a retraction or apology, especially to a state whose economy is driving the national recovery that he wants to take credit for?  Don't hold your breath.  As for Robert O'Rourke, he wants to take Abbott's job.  What say you, Texans?