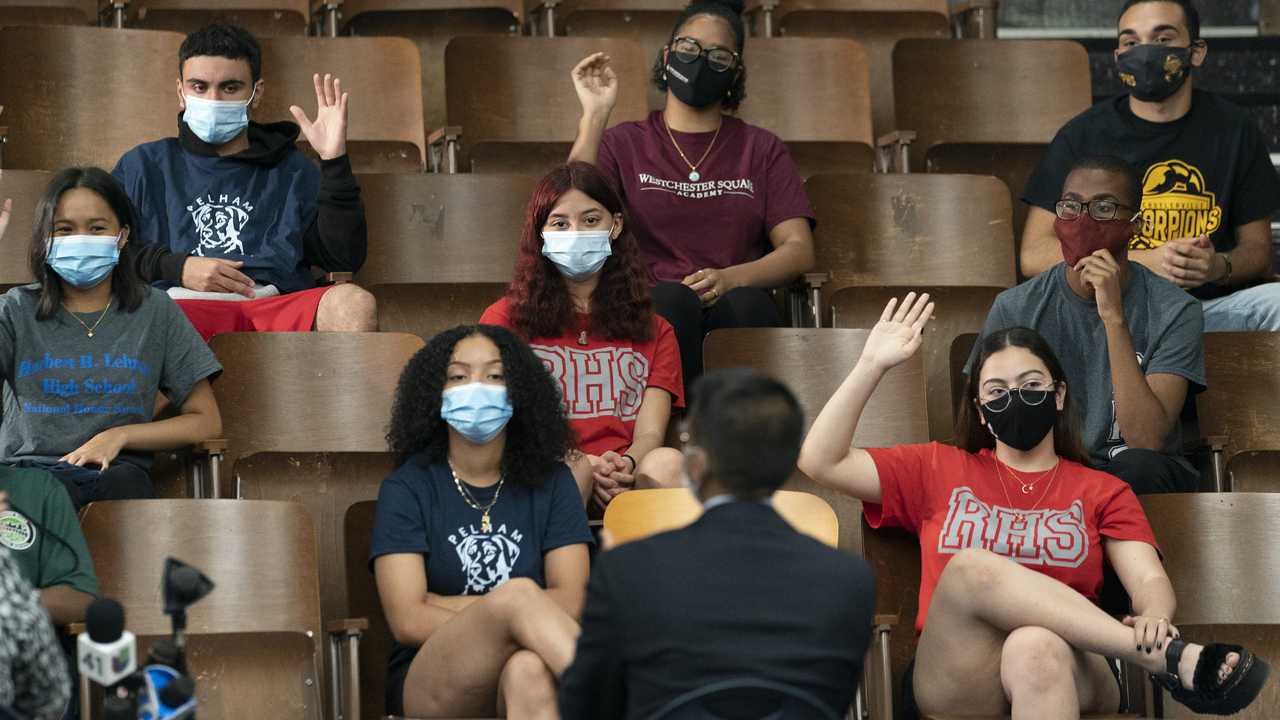 If only they had been paying attention to the enormous amount of data from the United Kingdom, Europe, and here at home, perhaps they wouldn't have been so "surprised" by the "unexpected" success of their maskless school experiment.

There has been a massive-scale experiment underway for the better part of two years, and anyone shocked by the outcome of their own belated participation in said experiment at this stage – including many blue state school districts and American public health "experts," sadly – has been seriously out to lunch. Better late than never, I guess:

After reaching the state’s required 80 percent COVID-19 vaccination threshold, Hopkinton High School became the first school in Massachusetts to lift its universal indoor mask mandate last month. And at least after three weeks, even some initial skeptics say the trial has been a surprising success. The Hopkinton School Committee voted Thursday night to extend the trial for another three weeks, allowing vaccinated students and staff at the high school to again go mask-less indoors beginning this Monday through the winter break. The decision comes as statewide COVID-19 cases and hospitalizations have steeply risen over the same time period... Officials said only one high school student tested positive for COVID-19 since the trial began Nov. 1, and that they had contracted the virus outside of school; there was no evidence of any COVID-19 transmission in the school building...Additionally, the majority of students and staff reported an improvement to the learning experience and a morale boost during the trial, which ended Nov. 19. “The pilot was far more successful than what I had anticipated,” Nancy Cavanaugh, the chair of the school committee, said Thursday.

I will at least give this school credit for having off-ramps at all, as opposed to indefinite masking stretching into oblivion – and for publicly acknowledging that this has gone well.  It's easy to dunk on them, but they're the first school in Massachusetts to actually attempt this, according to the article, so they deserve some credit. Some. But on the other hand, mask-free or mask-optional schools have been successful for quite some time, including pre-dating vaccines. That's such a key point, and part of the reason I can only bring myself to give partial credit for this decision. Schools haven't been major super-spreaders at any stage of this pandemic; finally allowing a temporary maskless option in an 80 percent-plus vaccinated school is ultra ultra cautious. So many places have needlessly delayed the improved learning experience and morale boost for so long. In the "maddeningly slow but incremental progress" department, The Atlantic magazine – which has strong credibility on the Left – published a piece last week that will hopefully help build a permission structure for normalcy in schools sooner than later:

"Then classes began, and … everything was okay," @aaronecarroll writes:https://t.co/QZ25ldJF5t

By the start of the next school year, vaccines were widely available for anyone age 12 or older. And many schools that reopened were able to implement measures that other institutions struggled with. Even so, people continued to worry about the danger that schools posed to society. Then classes began, and … widespread doom never really came—or, if it did, it didn’t come from schools. The Delta surge began long before classes resumed, and looking at the state-by-state data, you’d be hard-pressed to find bumps that can be pinned on the beginning of the semester. Last year, no surge happened in September either. Most states didn’t see any significant rise in COVID cases last fall until well into October. Schools aren’t the problem. They never have been. One of the frustrating things about the pandemic has been our inability, even at this late date, to understand why surges occur. They hit communities with mask mandates, and communities without.

I'll leave you with a few examples of the ongoing madness, via juxtaposition:

Here’s a picture my husband took at a concert earlier this week. Packed like sardines inside, most ditched masks. https://t.co/Dlt6rci1tV pic.twitter.com/4ccA2yce0b

It’s not just upstaters, @GovKathyHochul. While you keep 2 yr olds in diapers masked all day, I present to you, hordes of unmasked Democrats. And before you say they’re not eligible for vaxx, explain fully masked high schools and CUNY. #rulesforthee https://t.co/RVFnKoNOBU pic.twitter.com/ucekKpjS0h

????Finland officially not recommending vax for kids 5-11 w/o risk factors
"Infections in children of this age are usually mild & severe disease is extremely rare. When the burden of disease is small in one’s own group, very few adverse effects are accepted"https://t.co/NAsBbB52g0 pic.twitter.com/gv1kgXk9Lq