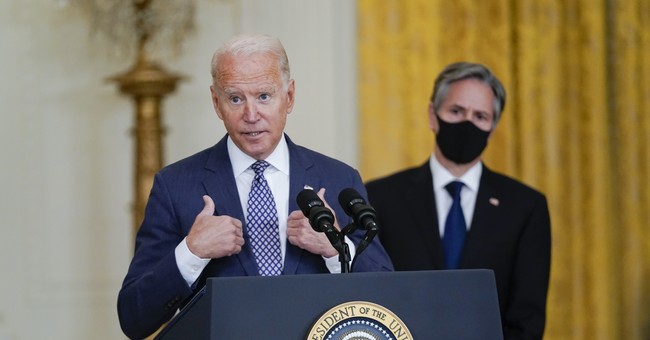 President Biden's secretary of state says he doesn't see a hostage situation in Mazar-i-Sharif, where would-be planeloads of Americans and various friendlies eager to leave Afghanistan are apparently being denied clearance for takeoff. The Biden administration simply cannot afford the debacle of US hostages being held by the Taliban, given the disaster over which they've already presided – including the shattered promise of getting all Americans and allies out of the country. Team Biden went from scolding reporters about using the word "stranded," to arguing that Americans get stranded all the time, virtually overnight. Remember, the president pledged on national television just a few short weeks ago that he'd keep troops on the ground until all Americans were out. Then he pulled the last US troops out, ahead of schedule, with thousands of US citizens and permanent residents still stuck (read: stranded) on the ground – to say nothing of the tens of thousands of allies to whom he'd made the same vow. That shocking betrayal, borne of horrific incompetence, is bad enough, especially with bloody reprisals well underway:

#Taliban terrorists have started executing female Police officers across #Afghanistan. Negar, a former Afghan Police officer was executed by Taliban in Firuzkouh, Ghour. They used screw driver to remove her brain in front of her family. She was pregnant when they killed her. pic.twitter.com/OeMgEAUjXL

If Biden's betrayal is compounded not only by grisly Afghan deaths at the hands of the Taliban, but also by Americans effectively held hostage, the catastrophe will become even more grave. Thus, Anthony Blinken won't even come close to using the H-word to describe what's happening here. This was from Monday:

"The Taliban is basically holding them hostage to get more out of the Americans," a senior congressional source told CBS News. 3/

The State Department says there is little it can do to help Americans and at-risk Afghans whose planes are reportedly grounded at an airport as the Taliban prevents them from leaving the country. At least six chartered planes are attempting to evacuate these Americans and others from Mazar-i-Sharif International Airport, but the Taliban is reportedly preventing them from taking off. Since it evacuated U.S. military forces and diplomatic personnel from the war-torn country, the Biden administration has not had the resources necessary to ensure that flights chartered by nonprofit groups and others can depart Afghanistan..."We do not have personnel on the ground, we do not have air assets in the country, we do not control the airspace—whether over Afghanistan or elsewhere in the region," a State Department spokesman told the Washington Free Beacon. "We understand the concern that many people are feeling as they try to facilitate further charter and other passage out of Afghanistan." ... Rep. Michael McCaul (R., Texas), lead Republican on the House Foreign Affairs Committee, who has received classified briefings on the matter, told Fox News on Sunday morning that there are hundreds of American still trapped in Afghanistan and that the "Taliban want something in exchange" for letting these people leave. McCaul has been tracking the situation and says the State Department cleared these flights to leave, but that the Taliban is responsible for stopping them.

You’re the damn State Dept, get some “reliable means.” You have one job. Good Lord

State Department says it has no 'reliable means' to confirm if Taliban preventing Americans from leaving Afghanistan https://t.co/7H90gQJ9ug

And here's Blinken talking very carefully about the situation yesterday:

U.S. Secretary of State Anthony Blinken said that Washington has identified a small number of Americans seeking to depart from Afghanistan’s Mazar-i-Sharif, and that the Taliban again assured that all U.S. citizens and Afghans with valid travel documents will be allowed to leave pic.twitter.com/7lDpwVAOAj

The Taliban claims they'll allow properly-documented personnel leave, but as Allahpundit points out, that's not a helpful assurance:

Since we’re relying on the Taliban’s judgment on whether someone’s papers are “valid” or not, it’d be child’s play for the new regime to scrutinize and ultimately deny departure to any passenger whom they have reason to believe worked with the U.S. military. Which is probably what this week-long delay in Mazar-i-Sharif is really about, right? The Taliban is probably checking to see which passengers collaborated with the U.S., fought for the Afghan army, or served in the now defunct government. They have plans for people like that. Because the two sides are still negotiating, and because it’d be a new political disaster for Biden if they called this what it was, State and its allies are bending over backward to say that this isn’t a hostage situation.

If there are Americans cleared to leave, but they're being blocked from leaving for various reasons – "logistical" or otherwise – that's getting awfully close to a full-blown hostage situation. AP is probably correct that the Taliban is more likely to drag collaborators off the planes (should they be permitted to board) than Americans (the Biden administration seems to be taking pains to ignore thousands of permanent legal US residents when they discuss Americans abandoned in Afghanistan, presumably to make the overall number look less terrible than it already does), but the delay could also be about leverage and demands.  Perhaps the financially-strapped Taliban wants cold, hard cash in exchange for the planes taking off. Perhaps they also want formal US recognition for their new interim government, which entails such characters as this notorious terrorist:

Under Taliban control, Afghanistan's new Minister of Interior is a terrorist on the FBI's Most Wanted list. #ThanksBiden pic.twitter.com/rABbC6HfjI

The FBI-wanted Sirajuddin Haqqani, head of the Haqqani network, a US-designated terror group, has been named acting interior minister, the Taliban said Tuesday in announcing its interim government. The State Department is offering a $5 million reward for information directly leading to his arrest. "Sirajuddin Haqqani is wanted for questioning in connection with the January 2008 attack on a hotel in Kabul, Afghanistan, that killed six people, including an American citizen," the FBI states. "He is believed to have coordinated and participated in cross-border attacks against United States and coalition forces in Afghanistan. Haqqani also allegedly was involved in the planning of the assassination attempt on Afghan President Hamid Karzai in 2008."

Whether the Taliban is holding out for money, recognition, other incentives, or to detain and execute "collaborators," the fact is that some number of Americans have been languishing for days, unable to leave Afghanistan specifically due to the Taliban's decisions. Biden and Blinken may not want to call that a hostage crisis, but what should it be called? And what does this episode foretell about potential similar stand-offs in the future? The White House keeps insisting that they expect the Taliban to live up to expectations and "assurances." How are they feeling about those talking points now, a week into the Mazar-i-Sharif mess?  Meanwhile, senior administration officials have been slippery and cagey in response to questions about how many stranded Americans have gotten out of Afghanistan since Biden broke his promise and ordered our forces to fully withdraw. But they apparently have tried to falsely steal credit for saving some of the Americans they stranded:

Note that the Americans involved here kept being denied access to the airport (something that happened a lot). So they were left trapped and abandoned. Private Americans stepped up to rescue them & the admin that abandoned them tries to take credit.

The organizer of a private mission to rescue an American mom, Mariam, and her three children from Afghanistan says the U.S. State Department is now trying to insert itself into the story of her evacuation, despite playing little to no role for much of the rescue effort. Senior State Department officials on Monday announced that the "U.S. has facilitated the safe departure of four US citizens by overland route from Afghanistan. Embassy staff was present upon their arrival." But those actually involved in the dangerous rescue operation say the State Department deserves little to no credit for Mariam's escape from Afghanistan. Cory Mills and a private team of military veterans, drawing on funding by private donors including the Sentinel Foundation, led the effort to rescue Mariam and her three children from Afghanistan, where they had been left behind by the Biden administration, multiple sources with knowledge of Mariam's evacuation confirmed to Fox News...The State Department's public posture about Mariam's rescue is "absolute nonsense," Mills told Fox News in an exclusive interview Monday. "The fact that they're spinning this, trying to take 100% credit when they didn't track this family, when they placated this family, when the mother, who was under extreme stress and extreme pressure, reached out to the State Department multiple times and got no help."

Classy stuff, and very on-brand, given how the Biden crew has handled every element of this fiasco. Some Americans don't seem interested in letting the Commander-in-Chief forget it, either, even if the media starts to lose interest:

"It's sad that America has come to this."

BIDEN takes a barrage of heckles from people behind a fence waving a Trump flag as he tours flood damage in the Lost Valley neighborhood of Manville, N.J. pic.twitter.com/dEN8oyu4bM

"He will leave you behind...My best friend died in 2011 in Afghanistan, for what?" I'll leave you with this:

Thousands of American citizens and residents were lied to and abandoned by President Biden – and have apparently been forgotten by the Senate Majority Leader.