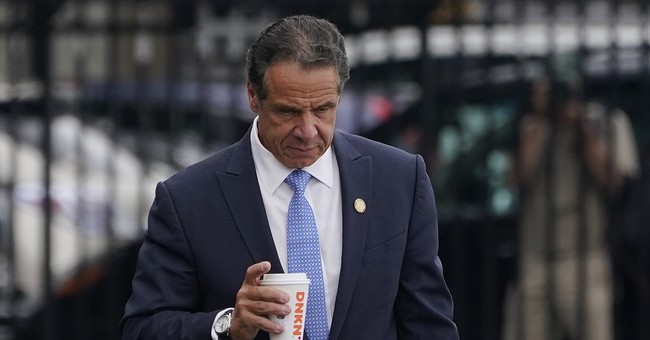 Disgraced New York Governor Andrew Cuomo left office this week, having resigned from the job he held for nearly three terms. As he departs, he faces ongoing investigations, potential criminal and civil legal exposure, and an impeachment inquiry. He gave a characteristically self-serving and delusional farewell address on Monday, in which he continued to dodge blame, and took one last, stomach-turning COVID victory lap as governor. The amount of high-grade gaslighting embedded into this nonsense is so intense that it almost necessitates a trigger warning. Here's his wild spin, if you can stomach it:

When government politicizes allegations and the headlines condemn without facts, you undermine the justice system – and that doesn’t serve women and it doesn’t serve men or society. Of course everyone has a right to come forward and we applaud their bravery and courage in doing so, but allegations must still be scrutinized and verified whether made by a woman or a man. That is our basic justice system. I understand that there are moments of intense political pressure and media frenzy that cause a rush to judgment. But that is not right. It’s not fair or sustainable. Facts still matter...The Attorney General’s report was designed to be a political firecracker on an explosive topic. And it worked. There was a political and media stampede. But the truth will out in time – of that I am confident...Please don’t forget what we learned together last year, and don’t forget what we accomplished. We went from the highest infection rate in the nation to the lowest. We did what no one thought could be done...Thank you for trusting me through COVID.

It's as if the Attorney General's investigation and report never happened. The claims were vetted thoroughly, with corroboration established. Anyone who trusted Cuomo through COVID – including most of the media, and the man who is now president – should not have. And one of his successor's first official acts in office helps demonstrate why:

Delivering another blow to former Gov. Andrew Cuomo’s legacy, New York’s new governor acknowledged on her first day in office that the state has had nearly 12,000 more deaths from COVID-19 than Cuomo told the public. “The public deserves a clear, honest picture of what’s happening. And that’s whether it’s good or bad, they need to know the truth. And that’s how we restore confidence,” Gov. Kathy Hochul said Wednesday on NPR. In its first daily update on the outbreak Tuesday evening, Hochul’s office reported that nearly 55,400 people have died of the coronavirus in New York based on death certificate data submitted to the Centers for Disease Control and Prevention. That’s up from about 43,400 that Cuomo reported to the public as of Monday, his last day in office. The Democrat who was once widely acclaimed for his leadership during the COVID-19 outbreak resigned in the face of an impeachment drive after being accused of sexually harassing at least 11 women, allegations he disputed.

Cuomo didn't just cook the books on COVID nursing home deaths in New York, having shifted the official counting mechanism in order to disguise and downplay the lethal consequences of his policy forcing infected seniors back into long-term care facilities; his administration also under-reported overall COVID deaths in New York by 12,000. And he lied about all of it, covering-up disastrous failures, en route to a $5.1 million book deal premised on his supposedly excellent COVID leadership. One of the remaining accusations against him is that his misused state resources in the shopping and writing of his book, having also allegedly given special treatment to family and friends on COVID tests. His allies are also said to have applied political pressure within the context of vaccine distribution in the state. All of this, plus the sexual misconduct (the preferred reason for legions of erstwhile "Cuomosexuals") led to this additional humiliation. Based on everything we know about Cuomo's ego and self-regard, this one must have stung:

Former NY Gov. Cuomo is no longer an Emmy Award winner after his award was rescinded, with the academy citing his resignation following a report that found he sexually harassed 11 women. https://t.co/gpFuSyFZ6t

As a cherry on top of this shinola sundae, one of the ex-governor's last moves in office was doing this:

On his way out the door, New York Gov. Andrew Cuomo had one final gift for the people of New York: commuting the sentence of a terrorist. Cuomo commuted the sentence of David Gilbert, the father of San Francisco District Attorney Chesa Boudin. Boudin had previously asked Cuomo to help his father, who he felt was treated too harshly by the criminal justice system. According to Boudin, Gilbert was simply an unarmed getaway driver...But Gilbert wasn’t just some guy taking part in an armed robbery gone awry. Gilbert was a member of the terrorist organization the Weather Underground. He took part in a planned raid of a Brinks armored truck, which ultimately ended in the deaths of a Brinks guard and two police officers. Gilbert showed no remorse during the trial. The New York Times reported that, during their sentencing, Gilbert and the other defendants were laughing and exchanging clench-fist salutes with their followers in the spectators’ gallery. Gilbert said, “The rulers, the rich, and their armed mercenaries are the only lives valued by this court. We say that if they sentence us to 1,000 years or shoot us at dawn tomorrow, it will not save this social system.”

The convicted murderer's son is now the effectively pro-crime Democratic District Attorney in San Francisco, who was thrilled by Cuomo's eleventh-hour reprieve:

Me and my dad in one of our last precious moment of freedom together. pic.twitter.com/ZaOYdn1tx4

A heart-warming tale, courtesy of two elected coastal Democrats. I'll leave you with Janice Dean speaking for many: