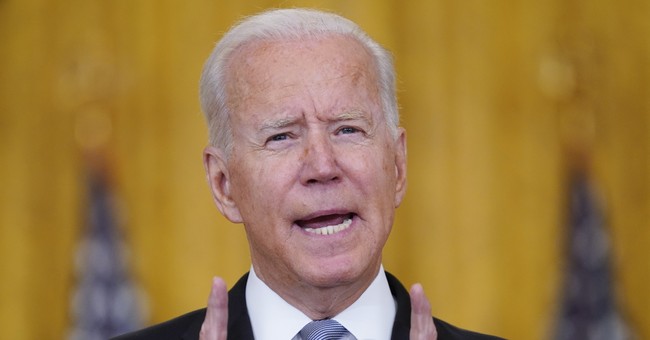 Let's begin with two quotes. The first is from respected diplomat Ryan Crocker, who's served across multiple administrations, including a post in Kabul during the Obama years: "I'm left with some grave questions in my mind about [Biden's] ability to lead our nation as commander in chief. To have read this so wrong – or, even worse, to have understood what was likely to happen and not care." The second quote is a bit older, and it's furnished by a man who is likely not surprised at all that Biden could have read a major foreign policy issue so wrong: "I think [Biden has] been wrong on nearly every major foreign policy and national security issue over the past four decades." That was former Obama Defense Secretary Bob Gates, writing in his memoirs. When pushed on the harshness of this assessment, he stood by it. Which brings us to President Biden's Afghanistan speech yesterday.

We will stipulate, at least for the sake of argument, that Biden – and Trump – are both correct that it's long past time for the US to cut our losses and withdraw completely from Afghanistan. Politicians from both parties have campaigned on that premise, and it has been a popular view, even though there are compelling counterarguments. Biden's speech reinforced the reasons behind his decision, and I suspect at least some of his points resonate widely. But the disaster currently unfolding is not exclusively or even primarily rooted in the decision to exit. It's about how that exit is taking place. Americans aren't recoiling in horror at the nightmarish humiliation in Afghanistan due to the policy of withdrawal. They're doing so because of the breathtakingly incompetent and disgraceful manner in which the policy is being carried out:

Biden’s speech: A blame-filled re-litigation of Biden/Trump policy of Afghanistan withdrawal (long debated). The calamity currently unfolding is largely about the astoundingly atrocious *execution* of that decision — which POTUS barely acknowledged. Not surprised he avoided Q’s. pic.twitter.com/1pGKYLIpQd

He avoided questions because the White House saw how poorly Sec. Blinken performed under sustained questioning over the weekend. There are no good answers to questions about how this mess has been allowed to unfold the way it has, so Biden obviously wanted focus on his reasons for withdrawal, not his responsibility for the way it's happening. Questions would have instantly jarred his preferred framing loose. So he didn't take any. Setting aside the substance of Biden's case for withdrawal – which has been debated at length, for years – much of his message was incoherent. Worse, it almost completely side-stepped the shambolic, horrifyingly inept nature of the embarrassing, tragic retreat over which he's presiding.

He claimed that the centerpiece of his foreign policy is "human rights," yet he's handing Afghanistan's people, including women and girls, over to a murderous gang of rape-and-pillage barbarians. He insisted that his human-rights-centric agenda cannot be achieved by military might, but rather through persistent diplomacy. He said this after the US embassy had been evacuated in an outright panic, with diplomatic personnel airlifted to the airport. Given the importance of airlifts, it's worth noting that America very abruptly handed Bagram Air Base over to the now-collapsed Afghan government last month, eliminating its utility as a crucial staging area for evacuations. Couldn't that step have waited until all Americans and other at-risk personnel had been safely relocated? Could this have been done any less competently?

Biden's remarks blamed everyone but him for this debacle (the president hilariously pretended as if his hands were tied by his predecessor, whose policies he's relentlessly reversed on virtually every front imaginable for the last seven months), followed by a few cheap, empty words about taking responsibility. His deflections and finger-pointing did not sit well with some of the people who served alongside and trained members of the Afghan military, whom Biden framed as cowardly and dishonorable (language warning):

In one year the Afghan Security Forces took more casualties than the US did in 20. To say they didn't fight is fucking reprehensible.

The president left out a few other relevant operational details, too. Afghan forces were hung out to dry. As Zeller says, it's also darkly laughable for Biden to claim his administration planned for every contingency. Apparently the reality contingency didn't make the cut, despite senior military officials warning against this course of action, and advocates for America's loyal Afghan allies outright begging for an orderly plan to deliver them to safety before the Taliban seized control and came knocking. Literally:

Thousands of U.S. citizens are trapped in Kabul with no ability to get to the airport. As Taliban soldiers go door to door, searching for Westerners, these U.S. citizens are now reaching out to Washington for help. https://t.co/0DfEcbrPyt

Taliban spokesmen keep saying they won't punish collaborators, but that lie is actively being disproven. Just last month, the secretary of state and the president himself were dismissing a rapid implosion as virtually unthinkable. Their words from a few short weeks ago now stand as staggering monuments to the delusional ineptitude of the self-appointed Adults in the Room. Between announcing exactly what the US would and wouldn't do, telegraphing our precise (symbolism-obsessed) timeline to the enemy, scheduling our departure during the height of the Taliban's fighting season (that 9/11 symbolism was just too important), and evidently giving almost no thought to the essential project of averting a humanitarian catastrophe for Americans and allies on the ground, it's hard to imagine how this could have gone worse. Every awful thing that's happening was not just foreseeable, but foreseen. Team Biden didn't care. And now the president is reduced to muttering about human rights while pretending that the bloody debacle he's unleashed was always inevitable, when in fact a modicum of planning and competence could have significantly mitigated the dire situation. I'm speechless:

The general briefing at the pentagon just responded “I don’t have an answer to that” when asked if there was a plan in place to prevent US military equipment and weapons from falling into the hands of the Taliban. Unreal.

How are thousands of Americans trapped in Kabul supposed to get to the airport? There's no plan for them at all. They all could become hostages. This is a crisis. https://t.co/0DfEcbrPyt https://t.co/GSCMWJPCu6

The blame game is well underway, with thousands still in harm's way. "I stand firmly behind my decision," POTUS intoned. "We planned for every contingency." Except for...all of them, it would seem. Gut-wrenching and avoidable:

My wife and one kid left for India, as they had visas. I am hiding with my two other children. We are scared, frightened, and threatened behind the door. And it’s terrible. I cannot make the words to explain the real situation. My cousin still is disappeared, and we don’t have any news. Every other country helped their allies — Canada, the U.K., everyone. But the only country — the superpower — that failed to help their allies survive is the United States of America. I begged. I shouted. I asked. And I told everyone that U.S. government has all our data. They have biometrics. If they really want to get their allies out, they should just make a process and take everyone. But they did not. And they didn’t even talk to our neighboring countries to provide us visas, like Tajikistan, Uzbekistan and other countries. Now, we are disconnected with the world. We are trapped here and the Taliban is chasing everyone. They are occupying properties. They are taking vehicles from people’s houses. They’re searching for people. And they’re taking people outside and executing them.

What a disgrace. Whether you agree with the withdrawal or not, it did not have to be this way, and don't let anyone – not least the president – tell you otherwise. Amazingly, the sheer, shocking scale of this debacle is so bad that Biden's failures have actually managed to shift public opinion away from solid majorities in favor of the underlying Biden/Trump exit policy. Second look at the "forever war," in which US troop levels were low, casualties were extremely rare, and terrorists weren't in control of the country?

With much of polling done before the chaos of the last two days, Biden approval on Afghanistan at 31-51.

Already over one-quarter of Dems disapproving, indicating the backlash is bipartisan. https://t.co/Qjp4WarUoJ

As Biden ends his speech, new @politico-@MorningConsult poll shows support for the Afghanistan withdrawal has plummeted.

"Now, 49 percent of registered voters support the withdrawal, down from 69 percent in April." https://t.co/swWY0rhCW5 pic.twitter.com/Y7l5DEeGn1

When asked about limiting our mission in Afghanistan to a “small presence,” slightly more voters would support the military staying there, with an uptick in support across party lines. pic.twitter.com/0TKjNg9CM6

Well, this is terrifying. Trying to imagine how this could be going any worse. https://t.co/7XyERDDr0B pic.twitter.com/SMydw89nqU

Who's confident Biden has a plan to deal with this? And if you do have confidence, why?