Commentary: No to New Mask Mandates, Yes to Getting Vaccinated 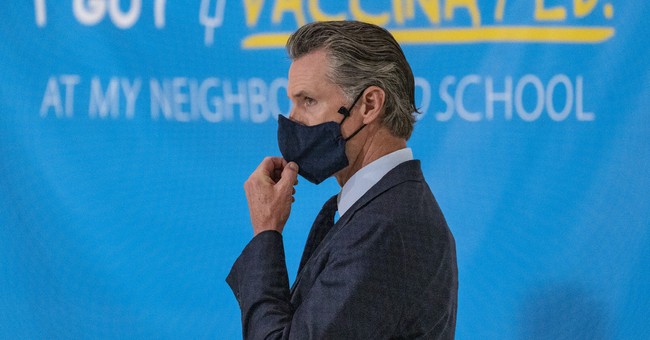 A number of jurisdictions are either considering or have already begun the reimposition of mask mandates amid surging COVID cases.  The country's largest county has done so, meeting with pushback from some local officials who don't seem keen on enforcing the reinstated restriction.  It looks like other places are edging in the same direction.  Los Angeles County's mandate applies to both unvaccinated and vaccinated people, which is ridiculous, anti-science, and flies in the face of CDC guidance.  There is conflicting evidence as to whether mask mandates work, but the real purpose of requiring vaccinated people to mask up is to protect unvaccinated people, who are also less likely to take mitigation steps like mask-wearing.  Punishing fully vaccinated people with inconvenient and uncomfortable mask mandates in order to potentially save people who have made a choice not to get vaccinated is a highly questionable decision.  It also sends a message to certain people that the vaccines don't truly work, and won't free them from other potential government edicts, so why bother?

One vaccine-skeptical friend of mine in Southern California texted me last week, shortly after LA County made its announcement.  He viewed it as an implicit concession from the Powers That Be that the vaccines aren't really effective.  Why else would they again be requiring masks for vaccinated people, he asked, also noting that cases are increasing despite lots of people getting vaccinated.  My response was simple: Yes, it's a mistake to reimpose mask mandates on vaccinated people for a number of reasons, but no, that foolish move is not driven by any lack of efficacy among the vaccines.  In fact, his second point unwittingly helped make the pro-vaccination case: Among new Coronavirus cases in the United States, 99.7 percent of them are in unvaccinated people.  As for new Coronavirus deaths in the US, nearly all were among the unvaccinated.  Full vaccination makes it much, much, much less likely that you'll contract the virus, and basically totally protects you against hospitalization or death.

That latter reality is especially important as people get concerned over reports of "breakthrough" cases affecting the double-vaxxed (including, for instance, the UK's health minister, and a prominent TV sports anchor).  Such infections do occur; I personally know a couple who are vaccinated yet contracted moderate COVID cases.  In fact, it's quite possible that such infections are more common than we know because most breakthrough cases involve non-existent or very mild symptoms.  Many vaccinated people who do get COVID don't even know it, or don't bother to get tested because whatever they're experiencing is so tepid.  This is, perhaps counterintuitively, another example of how terrific the vaccines are at keeping people relatively healthy and alive after exposure to the virus:

Dr. Scott Gottlieb said Friday he believed new infections of the Delta variant of Covid-19 were being “vastly underestimated” as a result of vaccinated people failing to get tested when they became infected. “I think we’re vastly underestimating the level of Delta spread right now because I think people who are vaccinated, who might develop some mild symptoms and might develop a breakthrough case, by and large are not going out and getting tested,” Gottlieb said in an interview on CNBC’s Squawk Box. “If you’ve been vaccinated and you develop a mild cold right now, you don’t think you have Covid.” Gottlieb helmed the Food and Drug Administration during the Trump administration...

The solution here is not to freak out and force vaccinated people into new restrictions. The solution is to try to persuade undecided unvaccinated people to get the jab.  Doing so requires a respectful tone, credible messengers, and directly addressing skeptics' actual concerns, writes Michael Brendan Dougherty at National Review:

Proponents of the vaccine are unwilling or unable to understand the thinking of vaccine skeptics — or even admit that skeptics may be thinking at all. Their attempts to answer skepticism or understand it end up poisoned by condescension, and end up reinforcing it...To understand vaccine skeptics, proponents need to understand that the skeptics typically don’t fear COVID. They may fear that taking the vaccine is, in some way, to consent to the view that their freedoms are dependent on compliance with public health. Arguing that the vax is the path back to normality and fewer public-health restrictions backfires with skeptics, in my experience. They see consent to this view as a promise to willingly go under house arrest once a new variant hits the front-page headlines again. For them, excessive fear of COVID is the primary cause of public-health restrictions, and their refusal to take the vaccine is, in some small way, an attempt to model a life unruled by this fear. Some proponents of vaccines, especially among conservatives, are willing to grant that public health has occasionally wasted the trust of the public on interventions...but they don’t quite grasp how sinister things can look to a skeptic.

Getting skeptics on board will require abandoning efforts that seem like open manipulation in defiance of the evidence. It will also mean leveling with people. An ad might acknowledge that indeed there aren’t long-term studies and cannot be any when we are responding to a sudden pandemic, but it could offer medical reasoning to trust that long-term health complications due to these vaccines are unlikely, given how few short-term complications there have been. A public-health campaign would give context to the information about vaccine reactions reported on the government’s own websites — such as the VAERs system — and explain how the government assesses them. In the absence of this, skeptics will take the word of whoever is willing to give this information context.

Here was my attempt at persuasion. Here is a useful thread addressing the VAERs point.  Cases, hospitalizations and deaths are being driven by unvaccinated people.  States with higher vaccination rates (largely blue) have lower case rates, based on data.  States with lower vaccination rates (largely red) have significantly higher case rates.   Vaccine hostility is fairly heavily, but not entirely, concentrated on the political Right at the moment.  Vaccine hesitancy is far more complicated and less political, with a racial component mixed in.  Vaccinated people are much less likely to get seriously ill or die from COVID -- which, yes, is very unlikely to kill people (especially younger healthier people) in the first place, but can have other serious health implications.  But the higher the vaccination rates, the lower the chance for needless death on the path to something like herd immunity, which will be achieved by vaccinations plus natural cases.  On that point, via Allahpundit, here is Dr. "Gottlieb’s prediction that this is *probably* the last major wave the U.S. will endure for the simple reason that so many Americans will get infected by Delta by the time it’s done that there won’t be many non-immune people left to fuel a future wave" (key point near the end of the clip):

"The canary in the coal mine, unfortunately, is going to be the nursing homes," says @ScottGottliebMD on when we'll learn #covid immunity wears off. "The infection is eventually going to get into these settings ... it's going to shoot around a facility like that." pic.twitter.com/lobuQ5dWjr

Getting to that status quo will less painful and less lethal with more people vaccinated.  That's a fact.  I'll leave you with this important point.  There will never be no risk.  That cannot be our goal.  The goal should be normalcy with substantially diminished risk, which is achievable and is in fact being achieved:

This view is so ignorant and harmful. Javid has said he has very mild symptoms. That's the benefit of being vaccinated.

If we plan on having restrictions as long as anyone can get Covid, even in the most mild form, the restrictions will never end. https://t.co/YqgvFjNl4i