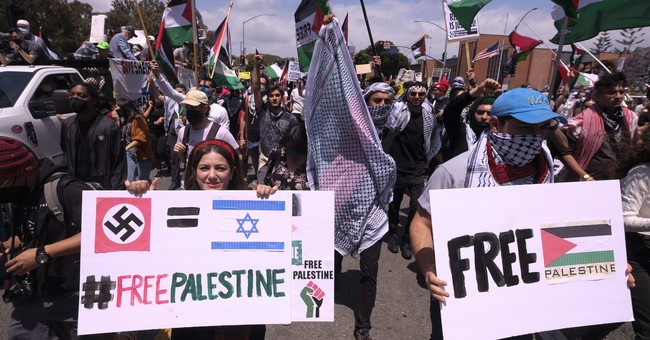 Try as they might, the anti-Israel smear brigade cannot erase a simple, glaring reality about the Israel/Palestinian conflict: Israel is not the problem. Throughout the pandemic, Israel has been criticized by many in the vaunted international community for leaving the Palestinians behind amid the Jewish state's world-leading vaccination push. This was cited as yet another example of Israel's cold-heartedness, lack of humanity, and "institutionalized discrimination" – with some even suggesting that Israel was actually violating international law by not taking responsibility for vaccinations within the Palestinian territories (Palestinians and Arabs living within Israel had full access to vaccines). There were multiple complex issues involved in these disputes, but the core dynamic at play was laid bare over the weekend, when the Palestinian Authority decided to accept, then reject, more than one million Pfizer doses from Israel:

The Palestinians rejected them with some ridiculous excuse about some of them expiring soon.

The vaccines are the same exact ones currently being given to Israelis.

The Palestinian Authority has rejected the transfer of more than a million COVID-19 vaccine doses from Israel after its health authorities determined that they “fall short of meeting the technical criteria,” PA Health Minister Mai al-Kaila said in a press conference late Friday, following Palestinian public criticism. The announcement came after Israel delivered a first shipment of 100,000 Pfizer COVID-19 vaccine doses to the PA, within hours of the Israeli government’s announcement of the vaccine exchange agreement. Israel said it would supply up to 1.4 million doses of the vaccine immediately to the PA, and in September or October, when the doses purchased from Pfizer by the PA are due to arrive, the same number of doses would be returned to Israel. The exchange deal would allow a large number of Palestinians to be vaccinated months earlier than planned. However, after some of the vaccines had already been transferred to Palestinian possession, Prime Minister Mohammad Shtayyeh announced late Friday that he was canceling the shipment because they are expiring soon. Israel, however, said it had given the Palestinians that information. The PA’s reversal was taken after many Palestinians criticized the PA government over the deal with Israel, largely because the doses were about to expire. They called on the government to cancel the agreement.

The doses have not expired. They would not be expired by the time they were administered. This is searching for a reason to reject Israeli help. Mind you, this insanity wasn't driven by the leaders, who agreed to the deal. They backed away when the Israel-hating public came up with an excuse for a backlash. Some of these people evidently prefer death to being injected with a life-saving cure provided by the Israelis. What more needs to be said? One Twitter observer snarked, "the Palestinians being offered 90 percent of something they believe they are entitled to and rejecting that out of hand is nothing new." Dark, but true enough. Meanwhile, here in the US, this disgraceful episode played out:

Israeli food truck @Moshava_Philly disinvited from a Father’s Day event in Philly over fear of protest. In America. In 2021. https://t.co/wQkGHh3oCm

This event was supposed to celebrate diversity through food.  But because of threats of "protests" against an Israeli food truck, organizers pulled the plug. Following an uproar, the entire event was canceled.  Heckler's veto: Achieved. Absolutely pathetic. It's all about "peace" and "justice," you see – definitely not a deep-seated hatred of the planet's lone Jewish state, or Jews generally. Oh wait:

“We don’t want two states. We want ALL of it.” Palestinian supporters in New York City calling for ethnically cleansing millions of Jews in Israel. They then chant support for Hamas Muslim Brotherhood child killers. h/t @ConspiracyLibel pic.twitter.com/jQPM0apilJ

Instructive. When people show you who they are, and tell you what they want, believe them. And many Palestinian supporters – not just Hamas militants in Gaza – want to wipe Israel off the map, and use openly eliminationist rhetoric in expressing that desire. I'll leave you with an incredible headline from CNN about Iran's heinous new "president," following an illegitimate election:

'It's Trump's fault that the Iranian regime is run by Death to America fanatics' -- CNN pic.twitter.com/MlmaAQVlVt

This piece of Trump-fixated hackery is astounding, even for them. Click through for a short, useful dissection.