Let's Face It: Wokeness Is a Serious Problem, Says... 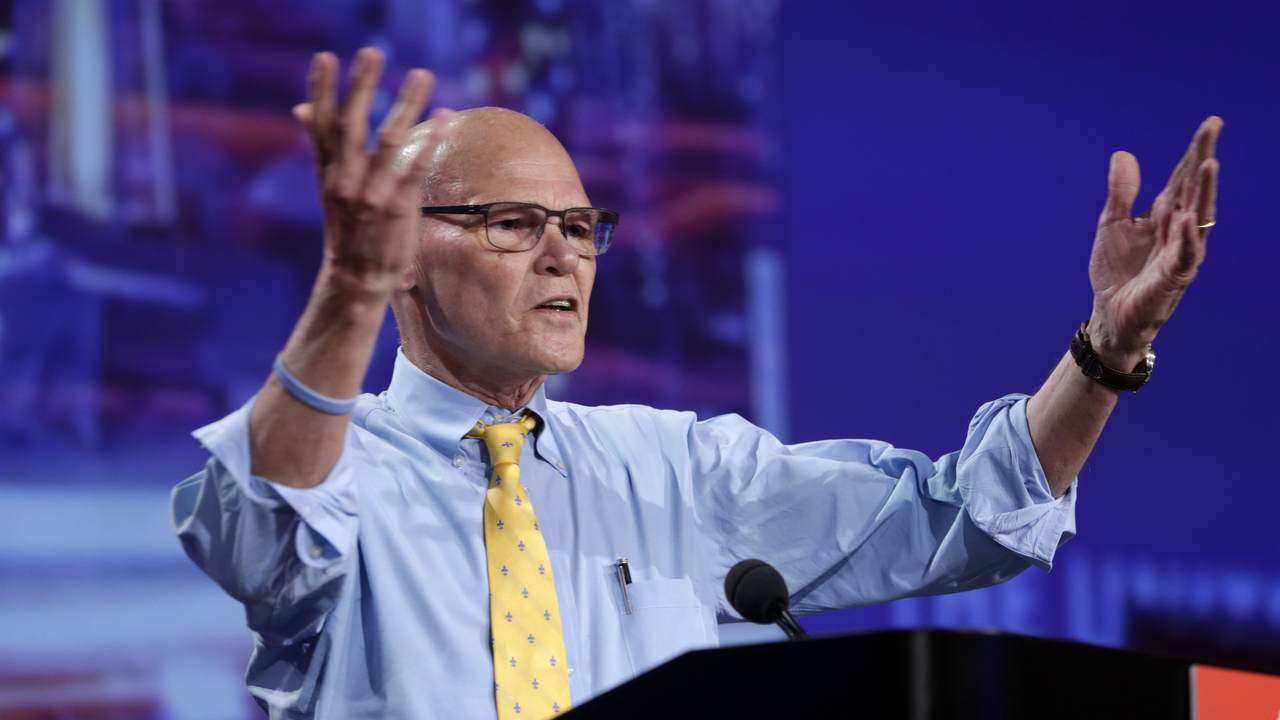 It's not just conservatives and independents who are turned off by woke preening and indoctrination; some liberals recognize it as a cancer that is hurting not only American society, but the Democratic Party. Longtime strategist James Carville, who has ripped wokesters before, doubled down on his criticism after his party defeated a far-left, AOC-aligned progressive in a special congressional election in his home state of Louisiana earlier this week. A bit of background:

Karen Carter Peterson, a former vice-chairwoman of the Democratic National Committee, had all the left-wing firepower you could want in the race. Peterson was endorsed by Representative Alexandria Ocasio-Cortez, self-proclaimed voting-rights leader Stacey Abrams, Elizabeth Warren, the pro-abortion group Emily’s List, the Black Lives Matter PAC, and the Congressional Progressive Caucus. Emily’s List alone poured $1.2 million in ads into the race. But it all flopped. Troy Carter, a Louisiana state senator, won 55 percent of the vote on Saturday. He had been endorsed by Cedric Richmond, who had vacated the seat to take a job in the Biden White House...Peterson tried hard to slam Carter as a moderate who was too cozy with Republicans. She cited his ties to the oil and gas industry and his support for a bill imposing harsh penalties on protesters who trespass at private energy facilities. Peterson, by contrast, embraced the Green New Deal along with a $20-an-hour minimum wage.

The voters of this overwhelmingly Democratic Southern district went with the more moderate option. Enter Carville:

The longtime Democratic strategist is mostly pleased with Biden, but it’s where much of the party seems to be going that has him worried. “Wokeness is a problem,” he told me, “and we all know it.” According to Carville, Democrats are in power for now, but they also only narrowly defeated Donald Trump, “a world-historical buffoon,” and they lost congressional seats and failed to pick up state legislatures. The reason is simple: They’ve got a “messaging problem.” ... You ever get the sense that people in faculty lounges in fancy colleges use a different language than ordinary people? They come up with a word like “Latinx” that no one else uses. Or they use a phrase like “communities of color.” I don’t know anyone who speaks like that. I don’t know anyone who lives in a “community of color.” I know lots of white and Black and brown people and they all live in ... neighborhoods.

Asked why more Democrats don't openly criticize excessive 'woke' politics, Carville replied, "because they’ll get clobbered or canceled." Almost as if "cancel culture" isn't some nonsense phenomenon dreamed up by paranoid right-wingers, as some proponents of cancel culture insist. Interestingly, Carville served up these quotes in an interview with Vox, which has experienced its own woke purges. But this is a fair point, too – with a few exceptions (defunding the police, for example), Carville's critique seems more geared toward messaging than policy:

People are touting Carville saying "wokeness is a problem," but the actual interview is disappointing. His criticism isn't about what the left wants to do, it's just about the words they're using to describe it. https://t.co/wHBvUHHFj1

Meanwhile, a tech company apparently known for its pristine woke culture is raising eyebrows with a major internal shift. A few of the changes spelled out in a memo to the company (emphasis mine):

1. No more societal and political discussions on our company Basecamp account. Today's social and political waters are especially choppy. Sensitivities are at 11, and every discussion remotely related to politics, advocacy, or society at large quickly spins away from pleasant. You shouldn't have to wonder if staying out of it means you're complicit, or wading into it means you're a target. These are difficult enough waters to navigate in life, but significantly more so at work. It's become too much. It's a major distraction. It saps our energy, and redirects our dialog towards dark places. It's not healthy, it hasn't served us well. And we're done with it on our company Basecamp account where the work happens. People can take the conversations with willing co-workers to Signal, Whatsapp, or even a personal Basecamp account, but it can't happen where the work happens anymore.

2. No more paternalistic benefits. For years we've offered a fitness benefit, a wellness allowance, a farmer's market share, and continuing education allowances. They felt good at the time, but we've had a change of heart. It's none of our business what you do outside of work, and it's not Basecamp's place to encourage certain behaviors — regardless of good intention. By providing funds for certain things, we're getting too deep into nudging people's personal, individual choices. So we've ended these benefits, and, as compensation, paid every employee the full cash value of the benefits for this year. In addition, we recently introduced a 10% profit sharing plan to provide direct compensation that people can spend on whatever they'd like, privately, without company involvement or judgement.

3. No more committees. For nearly all of our 21 year existence, we were proudly committee-free. No big working groups making big decisions, or putting forward formalized, groupthink recommendations. No bureaucracy. But recently, a few sprung up. No longer. We're turning things back over to the person (or people) who were distinctly hired to make those decisions. The responsibility for DEI work returns to Andrea, our head of People Ops. The responsibility for negotiating use restrictions and moral quandaries returns to me and David. A long-standing group of managers called "Small Council" will disband — when we need advice or counsel we'll ask individuals with direct relevant experience rather than a pre-defined group at large. Back to basics, back to individual responsibility, back to work.

Company leaders call the new plan "a return to a low-ceremony steady state where we can make decisions and move on. A return to personal responsibility and good faith trust in one another to do our own individual jobs well. A return to why we started the company. A return to what we do best." And the people who made these decisions took full ownership of them: "Who's responsible for these changes? David and I are. Who made the changes? David and I did. These are our calls, and the outcomes and impacts land at our doorstep. Input came from many sources, disagreements were heard, deliberations were had. In the end, we feel like this is the long-term healthy way forward for Basecamp as a whole — the company and our products." One wonders what levels of dysfunction must have precipitated these dramatic, if refreshing, developments.

Over at publishing giant Simon and Schuster, a fight is underway about censoring certain voices. The company booted one conservative Senator's book after the January 6 riot, then management rejected some employees' demands to refuse to publish a manuscript by former Vice President Mike Pence. The employees accused their employer of "complicity in perpetuating white supremacy," adding "this is not a difference of opinions; this is legitimizing bigotry." In response to this embarrassing tantrum last week, the CEO wrote: "As a publisher in this polarized era, we have experienced outrage from both sides of the political divide and from different constituencies and groups. But we come to work each day to publish, not cancel, which is the most extreme decision a publisher can make, and one that runs counter to the very core of our mission to publish a diversity of voices and perspectives." How did that go over?

These publishers against publishing are broadening their demands. The notion that wanting to nix all book projects from anyone tied to the Trump administration isn't about "difference of opinions" is increasingly typical nonsense. It's a textbook "End of Discussion" method of disqualifying differing views by framing them as so beyond the pale as to be dangerous or even "violence." This is how a younger generation of leftists seek to impose their will on institutions, and they'll either have people stand up to them, repeatedly, or their censorious, puritanical illiberalism will prevail.