Fauci vs. DeSantis: Should Vaccinated People Need to Wear Masks? 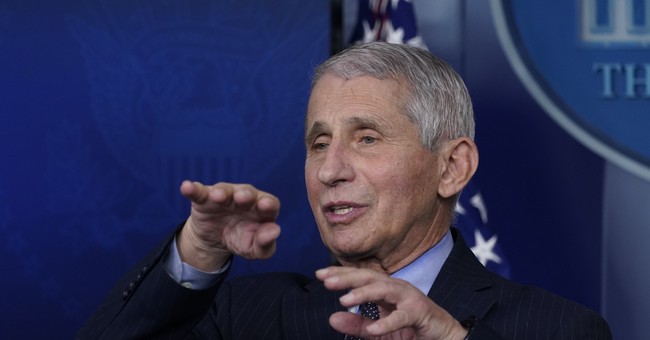 Dr. Anthony Fauci's blow-up with Jim Jordan generated a lot of attention last week, and understandably so. Fauci continued the dispute in his Sunday television appearances, insisting that COVID mitigation mandates have "nothing to do with liberties." Really? We all understand that Fauci is an infectious disease expert who will always err on the side of extreme caution and "public safety," as he sees it, which is why his perspective cannot be the only one being weighed by policy-makers. There are important competing interests very much at play, like economic considerations, mental health, and yes, liberties. Surely Fauci is not so naive and myopic as to wave away the impact of government directives that have harmed livelihoods, restricted free movement, and even curtailed religious worship. Of course, edicts about lockdowns and other policies have at least something to do with liberties – and to pretend otherwise is just the latest in a string of foolish messaging errors from Fauci. His polarizing credibility problem is real:

Earlier this month, YouGov found Fauci earning sky-high trust among Democrats only & struggling among all other groups (R's, independents, etc). He is no longer an effective public health messenger for much of the country, yet he remains ubiquitous in that role. pic.twitter.com/ziIODBpIXB

Some of this polarization is beyond Fauci's control and not primarily his fault. But he's certainly contributed to it, especially in recent months, and his ultra-cautious approach has become counter-productive – so much so that other prominent experts have tried to politely nudge him and others toward more realistic and responsive messaging based on emerging science. Instead, here he is on his endless media tour (consider the diminishing returns factor based on the above data) arguing that people who've been fully vaccinated may still need to wear masks indefinitely. He doesn't use that word specifically, but his standard seems to be "until there's zero risk" and there will never be zero risk:

CHUCK TODD: “Why does a vaccinated person have to wear a mask?"

The question he's answering was prompted by Florida Governor Ron DeSantis' overwhelmingly sensible and data-driven guidance that vaccinated people are immune and should therefore act like it:

He's right. And the science shows why. While Fauci is technically correct that there's not definitive proof that vaccinated people can't potentially pass the virus onto others, study after study suggests that such incidents are vanishingly rare. Indeed, the CDC Director recently short-handed the scientific consensus by asserting that immunized people don't carry COVID. She had to walk it back due to the technicalities raised by Fauci in this interview, but there's a reason why she said what she did in the first place. In short, the vaccines work miraculously well, and recent CDC data showed that the so-called "breakthrough" infection rate is 0.008 percent among the fully vaccinated. That's not zero risk, but there's very, very, very little risk, and vaccinated people should in fact act as if they're immune because they are. Our colleague at HotAir, Allahpundit, made this completely correct point about the vaccines, and Twitter slapped a warning label on it, for reasons that are baffling:

There is a substantial segment of the Left that is profoundly anti-science and effectively anti-vaccine by virtue of their ongoing insistence that the Coronavirus inoculation shots aren't nearly as effective and liberating as they actually are. Because the vaccines make COVID much less risky and deadly than the flu, and we don't shut down our lives and wear masks during flu season, it stands to reason that vaccinated people should be free to resume their normal lives. This shouldn't be terribly controversial; in fact, it should be celebrated. Instead, Fauci is appearing on national television to contradict DeSantis, critics are predictably raging at the governor and others for making obviously correct points, and lefties are even blasting fellow progressives who dare to suggest such radical ideas as outdoor masking, especially among the vaccinated, is unnecessary (which is beyond evident at this point). This is madness.

Meanwhile, some blue areas with tough restrictions, like Michigan, are hotspots right now. Others are doing fine, like California. And some red areas with lifted mandatory restrictions (Texas) are thriving, while similarly situated Florida has seen an increase in cases (although, thanks to the state's life-saving decision to prioritize seniors, the fallout will not be as concerning as it could have been). Telling vaccinated people to keep masking up will probably be a net negative by fueling vaccine suspicions and hampering the likelihood of people listening to experts' guidance. I'll leave you with one of America's bluest states considering imposing a quasi-permanent mask mandate, in one of the most ludicrous virtue signaling stunts of the entire pandemic, which is really saying something:

Some residents are fuming as Oregon considers a permanent mask mandate, even as some states loosen coronavirus restrictions. https://t.co/7L2EhoIMB7

And things are even less sane up north (where vaccine distribution has been far worse than in the US):

People cannot even walk outside in peace. Cops heckling about mask wearing in open air, parks, etc. Breaking up couples laying on the grass. People putting prescriptions in their pockets to walk outside at night to have a “pharmacy” excuse when they are stopped.

UPDATE  - I should add that Fauci suggested yesterday that administration of the Johnson & Johnson vaccine will likely be un-paused soon. While this predicted post-review green light will assuage some people's concerns, the pause itself will have shaken confidence in many others. Here are two experts arguing that the stoppage was a mistake:

It was a mistake to delay the decision on the J&J vaccine moving forwardhttps://t.co/2XB828uSpy by @GovindPersad and @WF_Parker @PostOpinions pic.twitter.com/f5SsCiQekP