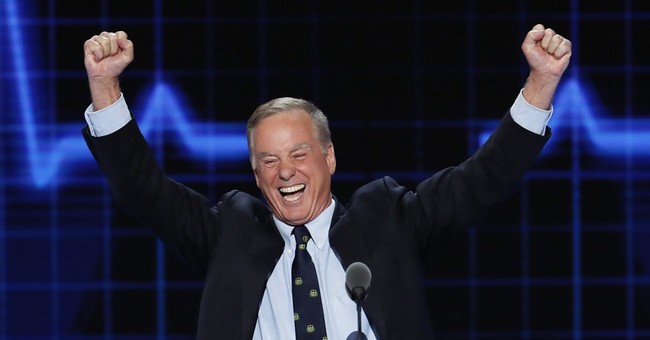 If we're starting to resemble something of a broken record writing about Florida's COVID response so frequently, it's probably because progressives and journalists – one in the same, in most cases – started attacking the state on this front at the onset of the pandemic and have never ceased, irrespective of the data or real-world outcomes. Correcting misinformation, clarifying the record, debunking myths, and checking facts on these matters sometimes feels like a full-time project. The latest example comes from a former Democratic governor and DNC chairman, who is the most recent figure to embrace the baseless conspiracy theory that Florida's stats aren't as bad as they "should" be because the state government is hiding the "true" data. They cannot process Florida and California taking opposite paths on mitigation and ending up with nearly identical case and death rates, so they conclude that Florida must be cheating. There is absolutely no evidence of this, of course.

Howard Dean's "BlueAnon" moment came in response to a piece by Derek Thompson in The Atlantic, essentially arguing that both political tribes are significantly overstating their preferred narratives about Florida. His basic conclusion is that Florida is sort of...average, which – granting his thesis for the sake of argument – I'd argue is an achievement, given their challenges and their favorable economic position, relative to other large states with far more restrictions (and similar or worse health outcomes). Dean simply could not accept that progressives have been wrong about their doomsday predictions and caustic condemnations of Gov. Ron DeSantis and company, so he descended into madness:

He could be talking about New York, which actually cooked the books, but he's not, for obvious partisan reasons. It is dangerous for prominent people to use their influence to push false information about COVID, and for some, this has resulted in sanctions from Twitter. Whether intentional or not, Dean's claim about DeSantis and his "henchmen" is an absolute lie. Florida's data is very transparent and accurate, the opposite of "worthless." Much of this widely-accepted lie on the Left is rooted in the saga of Rebekah Jones, a bogus "whistleblower" whose dishonesty, lack of ethics, and alleged multiple crimes utterly discredit the claims she's advanced. She was feted in the press because of her explosive allegations that aligned with what many in the press wanted to hear, but it's just not true. Read this and especially this. Many outlets have since backed away from her, but not all. And her high-profile round of false accusations still reverberate with people who wish to believe them. Beyond the Jones nonsense, one of Florida's top Democrats has explicitly rejected Dean's brand of paranoid innuendo:

Caputo, who writes for Politico, added that Moskowitz wouldn't deny that he was at least partially referring to the aforementioned Rebekah Jones, who has been constantly lying for months on end:

“Jones has held three jobs in her field; all three have ended in her being terminated and criminally charged.” What a sentence. It's incredible that confirmation bias-hungry leftists continue to put stock in anything she says, including high-profile leaders who ought to know better. Maybe they do know better, but don't care. Two more points: The Atlantic's COVID Tracking Project, which stopped new data collection in early March, used to grade states on the quality of their data. Florida consistently earned an "A." Also, let's pretend for a moment that the conspiracy crowd is onto something and the Sunshine State has been shrouding COVID deaths in darkness to downplay its problem. It's not true, but let's just indulge it for a moment. That theory would be given some oxygen if Florida's so-called "excess deaths" over the last year were suspiciously high, compared to officially-recorded COVID deaths. Last week, The New York Times examined "excess deaths" in America:

Since March 2020, about 565,000 more Americans have died than would have in a normal year, a sign of the broad devastation wrought by the coronavirus pandemic. An analysis of mortality data from the Centers for Disease Control and Prevention shows how the pandemic is bringing with it unusual patterns of death, even higher than the official totals of deaths that have been directly linked to the virus. Our analysis examines deaths from all causes — not just confirmed cases of coronavirus — beginning when the virus took hold in the United States last spring. That allows comparisons that do not depend on the accuracy of cause-of-death reporting, and includes deaths related to disruptions caused by the pandemic as well as the virus itself. Epidemiologists refer to fatalities in the gap between the observed and normal numbers of deaths as “excess deaths.”

In other words, there's no "hiding" from these statistics. What did the Times find in Florida? Well, here's a clue: "During the period of our analysis, estimated excess deaths were 17 percent higher than the official coronavirus fatality count." Their accompanying chart put excess US deaths as a whole at 21 percent "above normal." So the national average is somewhere between 17 and 21 percent "above normal," based on the data. What is Florida's state level percentage? Surprise: 17 percent. Either exactly average, or on the lower end of average, much like Florida's performance on other COVID metrics. By comparison, California is at 27 percent, Connecticut 28 percent, New Jersey at 32 percent, and New York City at 58 percent (New York State is at 24 percent, excluding the city). We know that New York manipulated its data and altered an official report on nursing home deaths. We don't know if these other states did anything wrong, intentionally or otherwise, to hide or mitigate their death stats.

The takeaway here, as a final nail in the conspiratorial coffin, is that there is literally no evidence that Florida has done anything remotely underhanded – and if they had, genuine whistleblowers would have emerged, the Florida-fixated national press would have been all over it, and the subterfuge would have shown up in the excess deaths data. It hasn't, because it didn't happen.