Psaki: Let's Avoid 'Labels' About This Border Non-Crisis – And Talk to DHS Because It's Not 'Our Program' 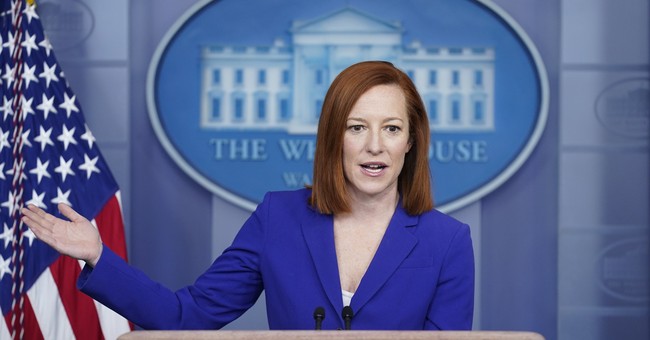 First off, I'm amused by the lame 'no labels' deflection from the White House Press Secretary, who continues to avoid using the word crisis to describe what's brewing at the Southern border.  She can continue with her tortured spin about how it's a "challenge" or whatever, but the rest of us must face facts.  It's a crisis.  Obviously.  The number of illegal migrant children in detention has tripled in the last two weeks, with projections over the next several months looking far worse.  They're running out of bed space for these kids.  Just read my post from yesterday and try to argue with a straight face that there is no crisis.  I called out the Biden administration's break from reality on Fox yesterday:

And yet, here we are:

That quote got some buzz, but this exchange was worse because of the shameless attempted buck-passing:

.@PressSec: "Those numbers are tracked by the Department of Homeland Security. I'm just suggesting that you talk to them..."

Q: "We talked to them, Jen. They won't confirm the numbers."

Psaki: "I would encourage you to go back to them & ask them again...It's not our program." pic.twitter.com/gXmEcWV5fI

C'mon.  Biden's political decisions have fueled this crisis, which is only going to spiral further (more on that in a moment). His administration idiotically tore up functioning agreements with four other governments that mitigated previous iterations of this crisis, signaled weakness and "compassion" on illegal immigration, and are seemingly doing everything they can to incentivize unlawful entries and overstays -- including announcing deportation freebies on committing additional serious crimes.  Now that an inevitable disaster directly caused by their policies and rhetoric is playing out, they're declining to use unhappy labels to describe and acknowledge its existence, and they're referring questions about it to DHS, which has been issuing warning after warning about how bad things are getting.  Also, it should go without saying that the Department of Homeland Security operates within the executive branch.  It is subject to the direction and policies of the President of the United States.  It is very much 'your program,' Jen.  You might want to circle back to that absurd excuse.  As Beth noted last evening, the situation has deteriorated so significantly already that DHS is asking for volunteer help to tackle the, er, "challenge."  And the numbers are growing.  Is this what they meant by 'building back better'?

Customs and Border Protection (CBP) is expected to release its February numbers, including apprehensions of migrants at the border, on Wednesday. Two sources familiar with the numbers told Fox News that apprehensions are expected to be around 100,000, up from 78,000 in January.  The numbers are the latest sign that the surge in migrants risks turning into a tidal wave by the time peak migration season hits later this year. In the 2019 border crisis, the height was in May when agents encountered 144,000 migrants. In February that year, apprehensions were at 76,000 and 57,000 in January. "It’s going to be insane come spring," one CBP source told Fox News.

And to top it all off, in addition to detention facilities -- referred to as "jail-like" by the press -- being allowed to open up at full capacity without social distancing because of the crush of arrivals, we have this delightful dysfunction:

More than 100 illegal immigrants released by the Border Patrol into Texas since late January have tested positive for the coronavirus following their arrival, officials in a city on the U.S.-Mexico border tell Fox News. Felipe Romero, a spokesperson for Brownsville, said Wednesday that the 108 positives represent 6.3 percent of the number of total migrants who have been rapid-tested at the city’s main bus station, where they are being released by the Border Patrol. Rapid testing of the individuals began there on Jan. 25. He added that Brownsville does not have the authority to prevent those who test positive from traveling elsewhere in the U.S. -- and are advising them to quarantine, follow the Centers for Disease Control and Prevention (CDC) guidelines and socially distance.

Not only do we have a border crisis underway, we have a border crisis in the midst of a global pandemic. And the federal government is releasing COVID-positive illegal immigrants into the United States, and the local authorities who perform the positive tests have no authority to stop this from happening.  I'd suggest asking President Biden about this, but we're approaching 50 days with no formal press conference, easily the longest such stretch for any president in 100 years.  As a back-up, I'd recommend asking the White House Press Secretary, but she'd probably just punt it over to DHS or HHS or some other agency.  "Not our program."