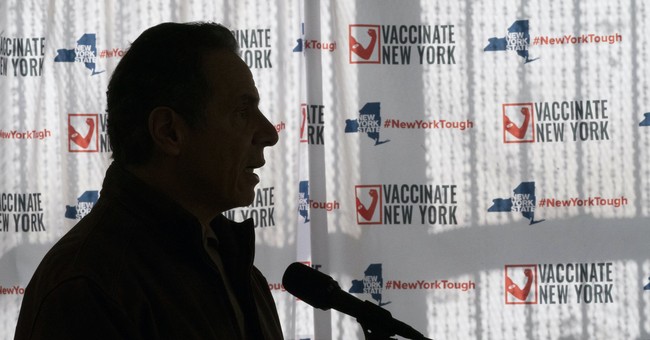 Welcome to the latest installment of the Cuomo COVID Chronicles, in which we highlight the cartoonish failures of a governor long lauded by the press and other fellow Democrats as an exemplar of strong pandemic-era leadership – a myth he has worked diligently to cultivate and prop up. Yesterday, we reviewed his disastrous public relations response to a devastating report from his own administration's attorney general, which confirmed that his administration massively undercounted nursing home deaths in the state. Beyond that lethal policy error and subsequent cover-up, The New York Times now reports that the governor is facing more internal upheaval. Nine senior health officials have tendered their resignations or otherwise departed over Cuomo's handling of vaccinations and other issues. They say the governor has spurned scientific expertise and rewarded cronies:

Cuomo threw out two decades of work & planning by health officials and instead created a totally new vaccine plan, relying on consultants, lobbyists, and donors. https://t.co/6BKAykFPu3

The deputy commissioner for public health at the New York State Health Department resigned in late summer. Soon after, the director of its bureau of communicable disease control also stepped down. So did the medical director for epidemiology. Last month, the state epidemiologist said she, too, would be leaving. The drumbeat of high-level departures in the middle of the pandemic came as morale plunged in the Health Department and senior health officials expressed alarm to one another over being sidelined and treated disrespectfully, according to five people with direct experience inside the department. Their concern had an almost singular focus: Gov. Andrew M. Cuomo. Even as the pandemic continues to rage and New York struggles to vaccinate a large and anxious population, Mr. Cuomo has all but declared war on his own public health bureaucracy. The departures have underscored the extent to which pandemic policy has been set by the governor, who with his aides crafted a vaccination program beset by early delays. The troubled rollout came after Mr. Cuomo declined to use the longstanding vaccination plans that the State Department of Health had developed in recent years in coordination with local health departments.

They allege Cuomo has been micromanaging public health decisions – poorly – while ignoring actual experts and eschewing implementation-ready plans developed based on best practices. As you continue to read these excerpts, please consider not only the substance of what's being said but also how furiously indignant the coverage would be if any of these exact same details were attributed to a prominent Republican governor. The story goes on:

After early problems, in which relatively few doses were being administered, the pace of vaccinations has picked up and New York is now roughly 20th in the nation in percentage of residents who have received at least one vaccine dose. “When I say ‘experts’ in air quotes, it sounds like I’m saying I don’t really trust the experts,” Mr. Cuomo said at a news conference on Friday, referring to scientific expertise at all levels of government during the pandemic. “Because I don’t. Because I don’t.” His comments reflected a rift between the state’s top elected official and its career health experts of the sort that has occurred across different levels of government during the pandemic...In Albany, tensions worsened in recent months as state health officials said they often found out about major changes in pandemic policy only after Mr. Cuomo announced them at news conferences — and then asked them to match their health guidance to the announcements...That was what happened with the vaccine plan, when state health officials were blindsided by the news that the rollout would be coordinated locally by hospitals. But it also occurred earlier with revisions in a host of state rules from the fate of indoor dining and businesses like gyms to capacity limits on social gatherings, according to a person with direct experience inside the department.

The Times reports that current and former officials fear retaliation from a vindictive governor for speaking out, with multiple sources saying morale is "at an all-time low." The piece also quotes Cuomo talking about the plans he decided to jettison: "It’s the Mike Tyson line: 'Everybody has a plan until I punch them in the face.'" Close your eyes, change a few titles and names, and you could be forgiven for assuming this was a story about Donald Trump, the former president who was raked over the coals (fairly and unfairly) for everything he did. Cuomo has been trumpeted as a hero, given multiple awards, and praised by Joe Biden as setting a "model" for the nation. We noted recently that New York's vaccination pace has picked up and now places respectably among the states. The Times confirms this, but it's crucial to point out that the aforementioned "early problems" needing to be overcome were caused in large part by Cuomo administration diktats, which were eventually reversed following the surreal spectacle of unused, expired vaccine doses getting thrown away. Based on this passage in The Times report, Cuomo's initial "leadership" hampered the vaccination process and relied heavily on input from lobbyists and donors:

The story quotes a top expert as saying Cuomo tossed out the playbook, which "did seem to negate 15 to 20 years of work." Instead, he leaned disproportionately on a small knot of longtime political advisors. "A task force with outside experts, convened by Mr. Cuomo to guide the vaccination plan, met infrequently and was rarely offered the chance to provide guidance," The Times writes. Asked about all the criticism, Cuomo asserted that he believes he's "saving lives." In closing, as we did yesterday, let's explore a study in contrasts, juxtaposing Cuomo's conduct with the decisions made by a large state GOP governor who's been demonized by agenda-driven journalists from word one. Two excerpts from a Ron DeSantis speech over the weekend in Florida:

Our early actions during the pandemic set the standard for how to protect the vulnerable. Florida has and will continue to lead – we put Seniors First, and other states soon followed. pic.twitter.com/5jseUYDDeO

Every Floridian has the right to earn a living. Florida is open, and we’ve got your back. pic.twitter.com/Y6WNAhu5qr

I've visited both New York and Florida in recent weeks. I've seen the current quality of life in each place, as well as the states' respective Coronavirus statistics. And without a shadow of a doubt, I know where I'd prefer to live right now. Check out this snapshot:

On what planet can it be credibly argued that New York's overall performance on COVID is superior to Florida's? Politics-fueled media narratives die hard, but this one is especially baseless and egregious. I'll leave you with this richly deserved parting shot (here's the context, in case you missed it):

Not a credible source on anything...except maybe the weather. https://t.co/fFyv6QAZH3