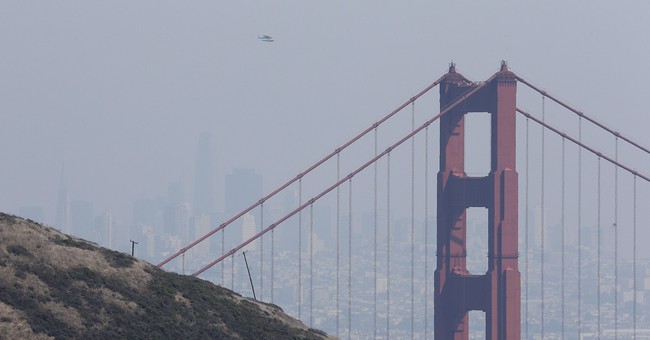 We knew this was in the works for some time, but now it's official: San Francisco's school board has voted to strip "problematic" names off of 44 public schools in the city. This is the culmination of a years-long process, following a 2018 vote to create a commission to study the issue and make recommendations. Their charge was to change "names of schools named for historical figures who engaged in the subjugation and enslavement of human beings; or who oppressed women, inhibiting societal progress; or whose actions led to genocide; or who otherwise significantly diminished the opportunities of those amongst us to the right to life, liberty, and the pursuit of happiness." These crimes would necessarily rule out many of the nation's founders, of course, but that last phrase allowed the woke brigade to cancel anyone else deemed to have inhibited people's "happiness." And thus the ax fell on dozens of names. Byron York reports:

Washington, Lincoln, Jefferson...Herbert Hoover, Paul Revere, James A. Garfield, Francis Scott Key, William McKinley, Daniel Webster, Robert Louis Stevenson, Junipero Serra (a Spanish priest who founded missions across California),William Cullen Bryant (the 19th Century writer), Francisco de Ulloa (a Spanish explorer), Adolph Sutro (a San Francisco mayor and philanthropist), Claire Lilienthal (a San Francisco School Board president), James Lick (a California philanthropist), and many more. The Board also voted to change the name of Roosevelt Middle School, even though no one was sure whether it was named after Theodore Roosevelt or Franklin Delano Roosevelt. Better safe than sorry.

Lincoln – Lincoln – didn't survive the purge. The Roosevelt detail reads like satire, but I'd bet neither Teddy nor Franklin would've made the cut anyway. Also among those targeted and removed was Sen. Dianne Feinstein, the liberal Democratic California senator currently in office. She has raised left-wingers' ire in recent years by being too civil with some conservatives and refusing to go along with insane $100 trillion "environmental" programs, so she had to go, too. The transgression they cited was an incident that occurred before many of the parents of San Francisco school kids were born:

Feinstein served as mayor of San Francisco from 1978 until 1988. Feinstein's offense, in the eyes of the School Board, occurred in 1984, when a socialist activist from the Sparticist League and Labor Black League for Social Defense tore down a Confederate flag displayed among 18 flags in a "Pavilion of American Flags" history exhibit in San Francisco. (Much of this story comes from an account by journalist Gabe Stutman in The Jewish News of Northern California.) The exhibit had been in place since 1964, and when the activist tore down the Confederate flag, Feinstein had it replaced with another Confederate flag. The next day, the Sparticist protester tore down the replacement flag, and Feinstein relented, eliminating the Confederate flag from the exhibit. She later apologized for her actions.

Back during Reagan's first term (!), she fleetingly stood up to a lawless act of vandalism before quickly backing down and apologizing. That was racist, of course, so off with her name. This would all be unnerving, anti-intellectual, ahistorical, reactionary madness under any circumstances. What makes it worse is that all of the schools being unnamed (there are no replacement names yet, just decisions to erase existing names) are currently closed. There's no learning happening in those schools because public officials have decided educating children with in-person instruction is too dangerous during the pandemic. So yes, in the midst of a pandemic, with students falling behind academically and suffering mentally and emotionally, the "adults" on the San Francisco school board chose to fill their time by stripping names like Washington and Lincoln off of empty buildings. That's what turns this "wacky left-wing Bay Area nonsense" story into something truly tragic and enraging. Then again, considering who's in charge of that school district, one wonders what on earth these kids would be "learning" in their shuttered classrooms.

We mentioned in yesterday's piece that the CDC is strongly recommending an urgent return to in-person instruction, based on reams of data. Here's one set of statistics that particularly stands out, especially as teachers unions across the country continue to refuse to show up for work, citing "health" and "safety" reasons:

NEW: @CDC study looking at in-person instruction in Wisconsin this fall finds even with aggressive community spread of coronavirus, only **3.7%** of 191 cases were linked to school.

KEY POINT: "No infections among staff members were found to have been acquired at school." pic.twitter.com/VEbB2eRyQ0

And this was with no distancing within classes.https://t.co/SGPdZsMlwt

There is no excuse to keep schools closed, yet closed they are in so many places. Places like San Francisco, where the people running the show are more interested in erasing America's past and enforcing radical values than seeing to the academic and overall well being of children. It's an absolute disgrace. As this National School Choice Week unfolds, I hope a great many parents of varying political stripes are learning very important lessons on this front – and will act accordingly as they make future decisions for their families, and at the ballot box.