Nikki Haley: Trump's Conduct Since Election Day 'Will Be Judged Harshly By History' 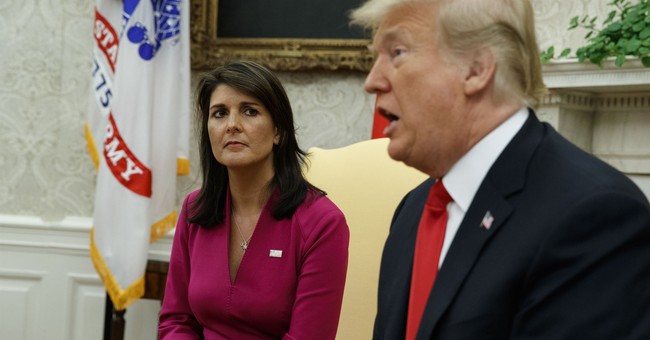 Where the Republican Party goes from here is anybody's guess.  In some respects, the GOP feels hopelessly divided and broken (I addressed some of this here), even as it stands just one historically-normal midterm election cycle away from regaining control of both houses of Congress.  Republicans on the Hill who are digging in with the vast Trump base are by and large those who pursued the elector objection project on Wednesday and Thursday.  The strongly anti-Trump faction of the party is headed in a very different direction, of course, with some either explicitly endorsing or overtly entertaining the notion of removing the president from office prior to the expiration of his term in 12 days.  What I've been curious about are the reactions of the potential bridge-builders -- i.e., prominent figures within the party who may not be universally loved by either major faction, but who have substantial currency and support within each.

A few names that come to mind are Sen. Tom Cotton, Rep. Dan Crenshaw, Gov. Ron DeSantis, and Amb. Nikki Haley (there are others, too).  It's true that for hardcore Trump fans, anyone who "betrays" the president in any perceived way, shape or form is instantly discarded as the latest persona non grata.  It's also true that for entrenched 'Never Trumpers,' anyone viewed has an "enabler" (meaning anyone who wasn't hair-on-fire outraged 24/7 about the president's existence and governance) is disgraced and unworthy.  Such people will not be placated by those they view as impure under their self-righteous standards.  But millions of conservatives and Republicans could be drawn toward a 'fusionist' candidate who seeks to bring the party back together.  I'm not sure this can be accomplished by calculation and careful stepping.  It will at least need to feel organic, causing voters on each side of the emerging divide to see something in that person that resonates with them and convinces them that ultimately, they're on their side -- and able to beat the Democrats.  How are the people named above grappling with the events of this week?  A partial, early review:

Cotton: Sen. Tom Cotton, R-Ark., said Wednesday night it was "past time" for President Trump to accept the results of the presidential election and called on him to "quit misleading the American people." And he demanded that lawmakers withdraw their objections to the election results.  "The senators and representatives who fanned the flames by encouraging the president and leading their supporters to believe that their objections could reverse the election results should withdraw those objections," he wrote in a statement..."Last summer, as insurrection gripped the streets, I called to send in the troops if necessary to restore order," Cotton said. "Today, insurrectionists occupied our Capitol. Fortunately, the Capitol Police and other law-enforcement agencies restored order without the need for federal troops. But the principle remains the same: no quarter for insurrectionists. Those who attacked the Capitol today should face the full extent of federal law."

Just had @DanCrenshawTX on @GuyBensonShow. He says he lays “a lot” of the blame for yesterday on POTUS & blames millions being fed “lies” that they believed. Explains why he voted against objections last night. Opposes 11th hour maneuvers to remove Trump from office.

DeSantis: DeSantis said Thursday an “anti-mob” proposal he introduced months ago in response to unruly racial justice protests also will apply to people on the right seeking to intimidate government officials. “I am the first governor to really take this very seriously with my legislation,” he said during a news conference in Bradenton. He added, “I don’t care what banner you are flying, If you are engaging in that conduct, we are going to hold you accountable.”...In the weeks after the election, the Republican governor didn’t acknowledge President-elect Joe Biden had won the election...“What I have said is you can file suit,” DeSantis said Thursday. “There are political ways to do it. In no way have I ever supported any type of lawlessness or anything like that.”

My statement from earlier today: pic.twitter.com/aoUN17dXi4

Haley:  "President Trump has not always chosen the right words," Haley said at the Republican National Committee's winter meeting taking place on an island off Jacksonville, Fla. "He was wrong with his words in Charlottesville, and I told him so at the time. He was badly wrong with his words yesterday. And it wasn’t just his words. His actions since Election Day will be judged harshly by history." Haley, who is considered a likely 2024 presidential contender, struck a balance between criticism of the president's actions and a full repudiation of his tenure. Calling Wednesday's violence "un-American," she nonetheless vowed to "defend the achievements of the past four years" and referred to her service in the Trump administration as "the honor of a lifetime."She went on to praise the administration's approach to foreign policy and the president personally for taking a clear-eyed view of China...Haley homed in on three issues that have little to do with the man who has dominated the news for the past four years: out-of-control government spending; socialism, which Haley argued has gone "mainstream in America"; and the rise of a so-called woke mob that threatens some of the country's fundamental liberties.

I'll leave you with my interview with another figure who may fall into this general category:

I asked @GovChristie — who reiterated his assertion that Trump is in violation of his oath — whether he believes the president should therefore be removed from office: https://t.co/OqVRc8oEDH