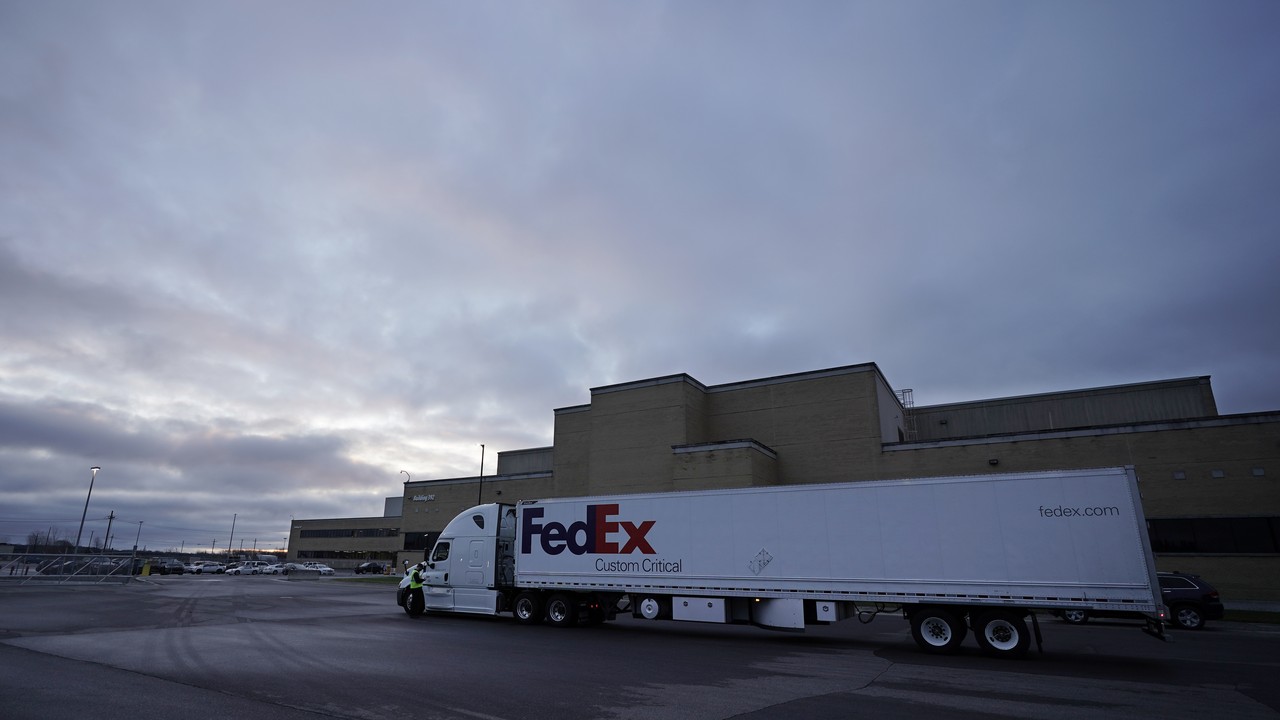 As we've written before, the smashing success of Operation Warp Speed is historic and breathtaking. Over the weekend, the Food and Drug Administration (FDA) approved Pfizer's COVID-19 vaccine for emergency use, with Moderna's vaccine candidate not far behind. Before the end of the year, millions of the most vulnerable Americans will be inoculated against this deadly disease -- a towering achievement. Humanity, led by America, has taken a massive step toward stamping out the pandemic. Some of this sort of impatience is understandable, but help is finally on the way. In case you missed any of it, here are the president's Friday remarks, as well as inspirational images of life-saving vaccine shipments finally rolling out on tractor-trailers yesterday:

“The pandemic may have begun in China, but we are ending it right here in America.” pic.twitter.com/CFPbPQ6pqw

Minutes ago, trucks filled with #coronavirus vaccines departed the @pfizer facility in Portage, Mich., headed for distribution centers and airports. Crowds who gathered outside the facility cheered the departing @FedEx and @UPS trucks. https://t.co/F29rcw6WcV pic.twitter.com/ZsTG2h5vJI

Injections started earlier today. The New York Times reports on some of the logistics of this achievement:

At Novant Health in Winston-Salem, N.C., the new ultracold freezers are ready — enough to eventually house more than 500,000 doses of the first coronavirus vaccine approved in the United States. In Los Angeles, the Cedars-Sinai medical center has installed extra security cameras to protect the secret location of its soon-to-arrive supply of the vaccine. In Jackson, Miss., the state’s top two health officials are preparing to roll up their own sleeves in the coming days and be the first to get the shots there as cameras roll, hoping to send the message, “We trust it.” The Food and Drug Administration’s emergency authorization on Friday night of the vaccine developed by Pfizer and BioNTech has set in motion the most ambitious vaccination campaign in the nation’s history, a challenge of staggering proportions choreographed against a backdrop of soaring infection rates and deaths. This weekend, 2.9 million doses of the vaccine are to begin traveling by plane and guarded truck from Pfizer facilities in Michigan and Wisconsin to designated locations, mostly hospitals, in all 50 states.

Preparations for this moment have been months in the making. Military planners have looked at a range of potential obstacles, from large-scale protests that could disrupt traffic to poor weather conditions. In an emergency, officials are prepared to use military airplanes and helicopters to deliver vaccines to remote locations. On Saturday morning, vials of vaccines were being packed and prepared for shipping at Pfizer facilities, with employees from the Centers for Disease Control and Prevention on site to make sure there were no mishaps, according to a senior C.D.C. official. Pfizer said the first shipment would leave its Kalamazoo, Mich. facility early Sunday morning. FedEx and UPS will transport the vaccine throughout most of the country, and each delivery will be followed by shipments of extra dry ice a day later.

The notion that there was "no plan" was political hogwash. There may still be bumps along the way, but the scale of this effort, coupled with the stakes of this accomplishment, is simply extraordinary. Miraculous, even. Recall this naysaying from earlier this year:

One interesting discussion that's emerging among some public health officials is how best to vaccinate the highest number of people, based on available stockpiles (especially in light of some supply chain hiccups at Pfizer):

I’ve said before on @FaceTheNation that most of the December doses are already made and available. So at least for the first 10 million or so doses you might deliver early - if the plan is to stockpile the second dose - then much of the necessary product is probably already made.

Even with these heartening developments, the coming weeks are going to be very difficult, amid high infections, hospitalizations and deaths. And because everything is political these days, here's some misleading content from a former journalist and current angry keyboard warrior, purportedly slapping down Mitch McConnell's entirely justified praise for Operation Warp Speed:

Here is Pfizer's July press release announcing its partnership with Operation Warp Speed, including nearly $2 billion in funding "to meet the U.S. government’s Operation Warp Speed program goal to begin delivering 300 million doses of a vaccine for COVID-19 in 2021. Under the agreement, the U.S. government will receive 100 million doses of BNT162, the COVID-19 vaccine candidate jointly developed by Pfizer and BioNTech, after Pfizer successfully manufactures and obtains approval or emergency use authorization from U.S. Food and Drug Administration (FDA)." Moderna's partnership with OWS is even more significant. The FDA will consider an emergency use authorization for Moderna's safe and effective vaccine on Thursday. I'll leave you with another flashback, followed by its direct refutation:

This is just wild. Redlener said without equivocation that it would be "impossible" to get a safe and effectively vaccine out by the end of the year. https://t.co/tPGX4l8sin

It happened! The first person to get the newly approved Pfizer vaccine under EUA in the United States: A critical care nurse in NY ?? pic.twitter.com/vf5l2KOJUj