Gallup: 56 Percent of Americans Say They're Better Off Than They Were Four Years Ago, And Yet... 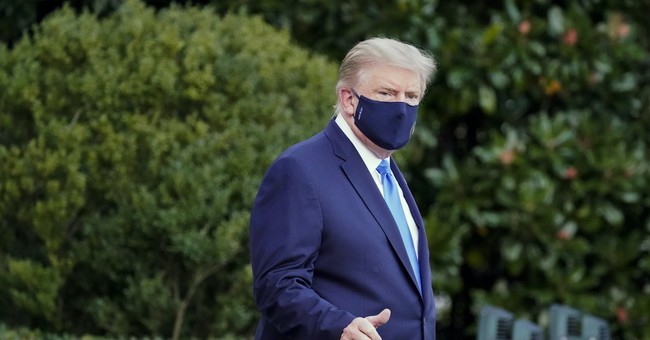 Two ways to look at this number, from Team Trump's perspective: Glass half full, and glass half empty. Let's take the optimistic view first. Just before the last Republican incumbent president won re-election in 2004, only 47 percent of Americans said they were feeling better of than they'd been four years prior. And just after the last Democratic president won re-election, that stat was 45 percent. Now, with weeks to go until voters render a verdict on whether the sitting president deserves a second term, a clear majority -- 56 percent -- of Americans say they're personally better off today than they were at the end of the previous administration:

In spite of everything going on -- including an ongoing pandemic and all the dreadful ripple affects associated with it -- most Americans say they're better off now than when President Obama was on the brink of being replaced by President Trump. That's a significant number, and it likely relates to how incredibly well the economy was doing before COVID began wreaking its havoc. Most people were, objectively, more prosperous, thanks in part to President Trump's economic policies. Wages grew, incomes increased, unemployment and poverty plunged. Pre-Coronavirus, the "better off" number stood at a whopping 61 percent. Pre-Coronavirus, I said that Trump was likely a favorite to secure a second term, despite his chronically underwhelming approval ratings. If the president can spend the next few weeks harnessing and winning over a sizable contingent of those who say they're in better shape now than when he took over, he has a shot at closing the gap. I mentioned this on Fox last night, while also reiterating this point, which cuts against the theory that a 2016-style comeback is in the offing:

The American people elected a historically personally-unpopular Republican president after eight years of Barack Obama. Their satisfaction has since measurably increased. They have consistently given Trump high marks on his handling of the economy, and clearly aren't rejecting his agenda and accomplishments (Trump leads Biden by three points on the question of agreement on issues). So why is he trailing Obama's former vice president, apparently handily? That question brings us to the glass half empty side of the equation: The answer is, him. In the same Gallup survey, Trump tumbles eight net points on the metric of "presidential qualities." That gap is telling, as is the canyon between the "better off" contingent and the incumbent's average projected vote share:

Trump’s vote share in the current RCP avg is *14 pts lower* than the clear majority of Americans who say they’re better off today (mid-pandemic!) than at the end of the Obama administration. Astounding. Referendum on the incumbent, as a person, the obvious strategy for Dems. https://t.co/2F9obyxRlQ

Another way of looking at this: In the RealClearPolitics average, Trump's economic approval rating is roughly 51 percent. His personal favorability rating is 43 percent, almost exactly equivalent to his vote share number. There are clearly quite a lot of voters who should be open to re-electing Trump based on his policies and results, yet who've grown so tired of his conduct that they are planning to throw him out of office. The devoted faithful don't want to hear this, even though I've been saying it for years. And unless the polls are again very wrong in decisive battleground states, the factors of comportment and fitness appear poised to sink Trump this cycle. In the interest of self-preservation, the president should muster whatever capacity for discipline he has and spend the next three-and-a-half weeks appealing directly to the voters who represent the 56 percent vs. 42 percent disconnect mentioned above.

His base loves him and will turn out. The Resistance loathes him and will turn out. Polling suggests that those in the middle are breaking pretty heavily toward Biden, so Trump's number one priority should be doing everything he can to peel some of them back into his camp, or at least the undecided column. I'll leave you with one way in which Biden -- the self-proclaimed candidate of norms and bipartisanship -- might scare some reluctant right-leaners and independents into voting Republican. Totally unacceptable:

"You'll know my opinion on court packing when the election is over." pic.twitter.com/uYEXZHHAp1

And to balance some of my commentary above, here's some data that cuts against the grain in terms of the conventional wisdom, partially drawing on a data point we wrote about back in August. Given the surprises of 2016, people shouldn't dismiss this analysis out of hand:

Four years ago, @SeanTrende was warning us to look past 'unthinkability bias' & consider that Trump could actually win. His current take on why, unlikely as it is right now, there remains a possible case for a Trump victory we should not overlook. https://t.co/fRIlILkb4x