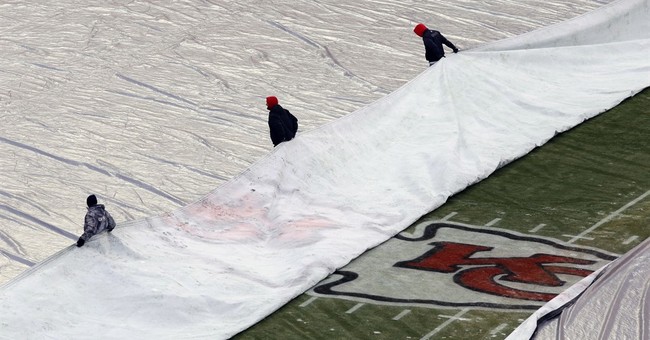 Here we have a cultural Rohrschach test.  To leftists, this episode in Kansas City proves that outrage over anthem kneeling was never about the flag or patriotism; it was always about white people telling black athletes to keep their thoughts to themselves and play ball.  To righties -- who believe anthem kneeling was never about police reform and was always about anti-Americanism and cop hatred (which certainly seems true of Colin Kaepernick) -- it was a natural expression of disgust over the politicizing of sports.  I think there's a little bit of truth to both theories, though the latter is closer to reality.  Here's the moment itself:

A moment of silence dedicated to the ongoing fight for equality in our country. #ItTakesAllOfUs pic.twitter.com/srC0SlnWdh

In other clips, the booing sounds louder and more pronounced.  Some people have argued that because the Houston Texans elected to remain in the locker room for the national anthem (the Chiefs were on the field for it, and all but one stood for it), the home crowd wanted to express disapproval over the opposition skipping the Star Spangled Banner (as well as the 'black national anthem').  Another theory I have is that many fans were upset that Houston boycotted the anthem and weren't in the mood to witness another orchestrated show that could read as political.  The boos rained down.  But notice that after the brief moment of unity concluded -- which did not involve a flag, or anything like it -- the overwhelming response was cheering and applause.  In other words, many people in the stands (17,000 were allowed to mask up and attend) were already unhappy with what they'd seen and didn't know exactly what was happening at mid-field.  They instinctively booed, then many recognized that it wasn't a remotely offensive display and changed their reaction.

In addition to a fractional group of actual racists, I'd also imagine that there's a larger contingent of fans who generally harbor a "shut up and play" attitude, or are sick of the politics, and are willing to communicate that view.  My opinion, as a big sports fan, is that kneeling during the national anthem is disrespectful, inflammatory and provocative.  The man who pioneered the tactic has proven himself to be a radical who holds a very dim view of the country, despite his immense success and privilege, and who decided to manifest that negativity only after his playing career went south.  Alternative symbolic gestures to oppose racism, signal unity, and support reform, however, seem like reasonable or even worthy compromises that do not at all merit harsh reactions.

I think fans should respect athletes' perspectives on issues, and understand the conviction athletes have (I'd bet it's genuine for some and performative for others) to use their platform for good.  If players, teams and leagues attempt to strike that balance in a way that doesn't involve actions that many see as disrespectful to the country, that should be at least tolerated, if not supported.  That being said, the sports industry as a whole should be wary of the fact that many, many consumers of their products are not on board for wokeness infecting the games they love.  The social justice crowd may be loud, influential, and massively overrepresented within sports media, but a massive percentage of fans who make professional sports possible don't like what they've been seeing.  Gallup:

The biggest slide, however, has been for the sports industry, with its positive score falling 15 points — from 45% to 30%.  The sports industry now has a negative image, on balance, among Americans as a whole, with 30% viewing it positively and 40% negatively, for a -10 net-positive score. This contrasts with the +20 net positive image it enjoyed in 2019, when 45% viewed it positively and 25% negatively.…While it’s not clear how much the various challenges and controversies swirling around the industry are each responsible for its slide in popularity, it is notable that sports has lost more support from Republicans and independents than from Democrats. In fact, Democrats’ view of the sports industry has not changed significantly in the past year, while Republicans’ has slipped from a +11 net-positive score in 2019 to a net -35 today, and independents’ from +26 to -10.

What makes this even worse is that it bucks a clear trend toward positivity from the American public. Gallup reports that Americans largely have sunnier views of almost all industries this year, probably an outcome of COVID-19 and the “we’re all in this together” attitude. Topping the list of big gainers this year are the essential businesses on which we have focused during the shutdowns — agriculture (+58), grocery (+51), and restaurants (+46). Heck, even the legal industry has a positive rating this year, albeit an anemic one at +6, and big pharma improved by seven points to get to second-to-last. When lawyers get a better rating than your industry, then maybe it’s time to rethink things — especially if you’re in entertainment. Speaking of which, lawyers edge out the movie industry (+4), too.

There are certainly other factors at play here that may not fit into tidy explanatory boxes, but it's telling that Democrats' views of sports are unchanged, while Republicans' and independents' positive rating have plunged by 46 and 36 net percentage points, respectively. Sports had been getting political for years, then things have really exploded. And vast numbers of people aren't impressed. Sure, some of the people who tell a pollster they're upset probably weren't fans to begin with.  Others are fans, but won't abandon their passion over politics.  But I'd wager that there's a sizable contingent of people who are either casual enough in their fandom, or committed enough about politics, that they will disengage to varying degrees.  And that means fewer eyeballs and lost revenues.  Just ask the hyper-woke NBA (interestingly, the far less political NHL has been performing better).

Ultimately, players and franchises have every right to take stands on issues and subjects that matter to them.  But so do fans, and sports is ultimately a business that relies on ordinary people to make it all work.  Aggressive, sustained alienation -- and injecting controversial politics into an enterprise that many people see as an escape hatch from life's various hardships -- is a risk.  Recognizing that reality does not put someone on the 'wrong side of history.'  And those who earn a living in the pro sports industry ignore the views of millions of their devoted customers at their peril.