Analysis: Following Obama, Kamala Underwhelms -- But it Doesn't Matter Much 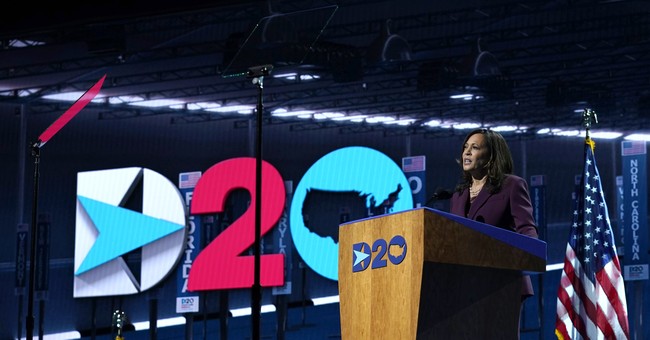 Night three of the Democratic National Convention featured a lineup of Hillary Clinton, Nancy Pelosi, Elizabeth Warren, Barack Obama and Kamala Harris -- enough to make even a tepid conservative reach for a stiff drink as a coping mechanism.  As I write this, nothing from the two-hour program stands out in my mind, with the exception of Obama's speech.  The first hour was packed with celebrity musical performances and messaging on hot-button issues like guns and immigration, with Democrats casting opposition to their policy stances as unimaginable, uncaring cruelty.  We've heard it all before.

They deceptively edited a clip to make it seem like President Trump referred to immigrants, and not MS-13 gang members specifically, as "animals."  This has been fact-checked before.  They shouldn't have to resort to lying to critique this president's immigration record, even if they choose to ignore their own role in rejecting reasonable compromises he's offered on the issue.  And per usual, they maddeningly and deliberately blurred and erased the distinction between legal and illegal immigration.  They also recited familiar gun control talking points as if the last few months haven't happened. Armed citizens' right to self-defense has rarely felt more urgent in modern America as it has in the face of state and local governments -- often in places with strict existing gun laws -- repeatedly demonstrating their unwillingness or inability to keep the peace, defend people against mobs, or protect private property from wanton destruction.

Based solely on the rhetoric over the past three nights, viewers would be left with the distinct impression that every social justice protest across the land has been uniformly peaceful.  There has not been a hint of acknowledgement, let alone condemnation, of rioting, looting and violence.  It really feels like an alternate reality in some respects, as partisan conventions sometimes do.  As for the speakers, Hillary Clinton was predictably insipid, bitter, and vaguely conspiratorial.  The gap between the slick 'Pelosi-as-badass' hype video and the contemptible Speaker's mundane, unmemorable performance was stark.  Elizabeth Warren, with an empty classroom as her backdrop, spoke some words, none of which I can remember -- except for something about her aunt and a dog, a biographical note that should probably be fact-checked, just for good measure.

But as his wife did on Monday, President Obama achieved something by owning the moment and delivering a compelling speech in a difficult format.  It was brilliantly crafted and expertly delivered.  At times, an anger seemed to burn in the former president's eyes.  My inner monologue was flooded with counterpoints and objections to some of his characteristically tendentious and self-serving arguments.  Suffice it to say that his signature straw man-slaying trope of framing his views as obviously rational and fair is not something I've missed.  In a sane world, you see, his opinions and priorities would be embraced and accepted as totally uncontroversial -- but alas, his irrational, dangerous opponents insist on ruining everything, and therefore must be crushed.  He inveighed against they and them, while simultaneously claiming the mantle of unity and shared values.  Classic, irritating Obama.  But some of his exceptionally pointed critiques of his successor found their target because they were true, and his successor seemed determined to help reinforce some of those critiques in real time:

the president's rebuttal to obama's argument that he is fundamentally unserious and incapable of doing his jobhttps://t.co/67kKV6yY8g

Obama is a gifted politician, replete with a cynical and demagogic streak. I suspect he accomplished exactly what he set out to do last night.  And unfortunately for Kamala Harris, who was supposed to be the star of the evening, she was forced to follow him.  By comparison, Harris' speech was utterly mediocre, instantly forgettable, and packed with dull boilerplate, with a dash of woke cliches.  It meandered along with no clear theme, bogged down by her stilted and strained delivery.  She could have really used an audience; the convention staple of frequent if perfunctory applause would have made the moment feel a bit grander and less flat than it was.  One reason she flopped as a presidential candidate is that she's seriously overrated as a political talent.  We were reminded of that truth last night.  I'd venture to say she was significantly better last week during her (fact check-worthy) rollout speech.  Then again, it doesn't matter.  I cannot remember a single line from the sitting Vice President's acceptance speech in Cleveland, and I attended it.  Can you?  Relatedly, it always takes me half a second to even remember the identity of Hillary Clinton's running mate.  Harris wasn't disruptively terrible, so that'll do.

The Democrats are making an argument to the American people that Donald Trump is an unworthy leader who has failed in his duties, and that Joe Biden is a genial, empathetic fellow who's been around for quite awhile and isn't Trump -- and it's not important to think too hard beyond that.  They're sprinkling in a handful of notes to peel off some disaffected right-leaners, with just enough lefty base-servicing (pay close attention to this, because it's how they'd govern) to keep the progressives happy.  I cannot imagine anything we've witnessed this week has done much to change the trajectory of the race.  And as far as Democrats are concerned right now, that's just fine by them. I'll leave you with this, which made me chuckle: