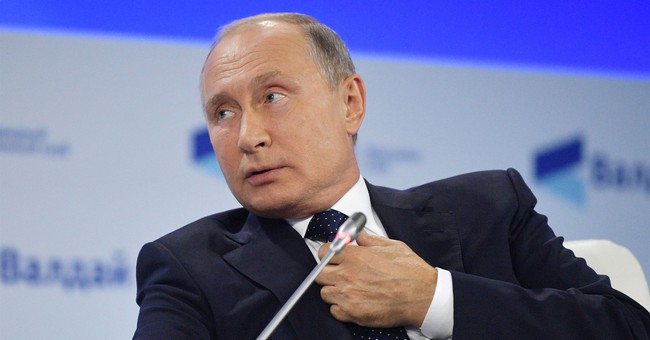 On March 21, I tweeted about a CNN story covering Russia's supposedly 'successful' strategy against the coronavirus. The basis for the piece was the Kremlin's official statistics, which didn't strike me as likely to be credible. I also couldn't help but consider the irony of CNN -- which devoted countless hours to "collusion" theories that did not pan out -- simply regurgitating Moscow's propaganda on a separate front, in an effort to make President Trump look bad by comparison (though it could also be argued that many in the US media, and even some in law enforcement, played directly into Russian propagandists' hands by taking the compromised Steele dossier seriously). This sarcasm seemed richly earned at the time:

Yes, if there’s one thing we can trust at a moment like this, it’s definitely... Putin’s official stats. https://t.co/cEc9zcGhSz

Weeks later, CNN published a story that was literally a repetition of Chinese Coronavirus propaganda, to which I devoted a twitter thread and a lengthy Tipsheet post. Under pressure, CNN overhauled their entire story, which should never have been published in the first place. In light of new information and evidence on Russia and the coronavirus, which we'll review shortly, conservative writer Drew Holden revisited the March CNN report referenced above. In retrospect, he argues, it looks even more egregious:

It starts by praising a murderous dictator, applauding Putin for handling the coronavirus well.

CNN’s Russia reporter/producer @maryilyushina trusts information coming out of Russia, concluding off the bat that “Putin’s strategy seems to have worked.” pic.twitter.com/fInYTk9ARD

@maryilyushina then favorably compares the Russians to testing in the US. As evidence they site Rospotrebnadzor, calling it a “consumer watchdog.”

@maryilyushina goes on to provide the ‘evidence’ - citing an autocratic government and, ever their close ally, @WHO - that this isn’t the case. Screenshots below, including a quote from Putin.

The @WHO rep explicitly says he “do[es] not believe this [coverup] is happening.” pic.twitter.com/FGxDx5mS5g

The piece credulously cited Russia's bogus data and quoted Russian propaganda and comments from a compromised organization (WHO) to supposedly dispel valid critiques. The story's headline was "Why Does Russia, Population 146 Million, Have Fewer Coronavirus Cases Than Luxembourg?" The obvious answer, even then, was: They don't. They're lying. Fast forward to this week. We still have no reason to uncritically believe the data coming out of Moscow, but even their "official" statistics are showing serious problems, with Putin's popularity falling: "Russia reported on Thursday more than 11,000 new cases of the coronavirus, a new one-day record for new cases in the country as President Vladimir Putin's popularity has plunged to the lowest levels of his 20 years in power," writes US News. And then there's this, via...CNN:

Three frontline health care workers have mysteriously fallen out of hospital windows in Russia over the past two weeks, heightening public attention to the working conditions for doctors and medical professionals amid the coronavirus pandemic.  Two of those health care workers are dead, and one remains hospitalized...Alexander Shulepov, an ambulance doctor in Voronezh, a city about 320 miles south of Moscow, is in serious condition after falling from a hospital window on Saturday. Local state television, citing regional health officials, said he fell out of second-floor window of the Novousmanskaya hospital, where he worked and was receiving treatment after testing positive for coronavirus...Shulepov was hospitalized for coronavirus on April 22, the same day he and his colleague Alexander Kosyakin posted a video online saying that Shulepov had been forced to continue working after testing positive for coronavirus. Kosyakin had previously criticized hospital administration for protective gear shortages on his social media and was questioned by the police for allegedly spreading fake news...The regional department of Russia's health ministry told CNN in a statement that Shulepov "is a victim of an accident due to his own lack of caution" and is receiving all necessary medical care.

More from the story:

It is rare for doctors to fall from windows in Russia, but Shulepov was the third health worker to fall out of a window in the country in the past two weeks. On May 1, Elena Nepomnyashchaya, the acting head doctor of a hospital in the Siberian city of Krasnoyarsk, died after spending a week in intensive care, the regional department of the Health Ministry said in a statement. Local TV station TVK Krasnoyarsk reported at the time that Nepomnyashchaya allegedly fell out of a window during a meeting with regional health officials, during which they discussed turning the clinic into a coronavirus facility. Nepomnyashchaya was reported to have opposed those changes due to the lack of protective gear in the hospital.

So at least two of the three doctors who "accidentally" fell from hospital windows had recently dissented from the official line. One retracted his whistleblower-style complaints after authorities confronted him over "spreading fake news," then he plunged out a window shortly thereafter. Another doctor died during an "accidental" fall from a window during a meeting with Russian health officials, during which the doctor reportedly voiced opposition to the government's plan. Let's not jump to conclusions, but bad things befalling problematic doctors and unhelpful critics has some strong Chinese vibes, doesn't it? Dissent can be deadly in Putin's Russia.

Holden concludes, "by all reporting - including CNN’s - this entire article was wrong. That happens in journalism." But in being wrong, he writes, the network "pushed propaganda for an autocratic government. This is inexcusable. They faithfully reported what a dictator, Vladimir Putin, wanted the world to hear, as his government let thousands more civilians die. America’s chief geopolitical enemy used a major US media outlet to distract from that and obfuscate the truth. And the WHO was there to help...CNN should retract this story and issue a full correction. And more importantly, they should get better." His parting advice: "Stop believing autocrats and despots. Stop pushing their propaganda. Stop using it as a cudgel to bash Trump. Stop believing WHO." Good ideas.