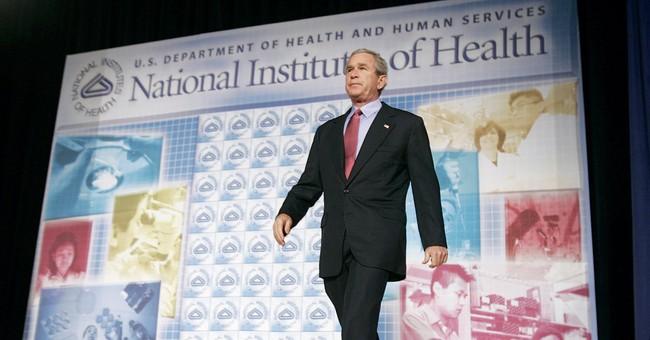 Back in 2005, President George W. Bush became urgently worried about a global pandemic that could wreak havoc on Americans' lives and jobs. He'd become engrossed by an arresting account of 1918's deadly Spanish flu -- which killed an estimated 675,000 Americans -- so much so that he immediately told top federal officials that preparations and strategies needed to be established and put into place in advance of a potential outbreak. ABC News reports:

In the summer of 2005, President George W. Bush was on vacation at his ranch in Crawford, Texas, when he began flipping through an advance reading copy of a new book about the 1918 flu pandemic. He couldn't put it down. When he returned to Washington, he called his top homeland security adviser into the Oval Office and gave her the galley of historian John M. Barry's "The Great Influenza," which told the chilling tale of the mysterious plague that "would kill more people than the outbreak of any other disease in human history." "You've got to read this," Fran Townsend remembers the president telling her. "He said, 'Look, this happens every 100 years. We need a national strategy.'" Thus was born the nation's most comprehensive pandemic plan -- a playbook that included diagrams for a global early warning system, funding to develop new, rapid vaccine technology, and a robust national stockpile of critical supplies, such as face masks and ventilators, Townsend said.

Unfortunately, "the effort was intense over the ensuing three years, including exercises where cabinet officials gamed out their responses, but it was not sustained. Large swaths of the ambitious plan were either not fully realized or entirely shelved as other priorities and crises took hold," according to the piece. I'd simply add that if this timeline is accurate, and the push was sustained for three years before falling by the wayside, that would suggest that a certain subsequent administration dropped the ball or abandoned the progress. The Bush administration was also overseeing the prosecution of two post-9/11 wars, fervently working to prevent new terrorist attacks on the homeland, and eventually found itself mired in a hurricane response and recovery controversy that engulfed every level of government in Louisiana. Nevertheless, officials recall that Bush didn't just insist that this be a priority. It was an obsession:

When Bush first told his aides he wanted to focus on the potential of a global pandemic, many of them harbored doubts.  "My reaction was -- I'm buried. I'm dealing with counterterrorism. Hurricane season. Wildfires. I'm like, 'What?'" Townsend said. "He said to me, 'It may not happen on our watch, but the nation needs the plan.'" Over the ensuing months, cabinet officials got behind the idea. Most of them had governed through the Sept. 11 terror attacks, so events considered unlikely but highly-impactful had a certain resonance...According to [former Homeland Security adviserTom] Bossert, who is now an ABC News contributor, Bush did not just insist on preparation for a pandemic. He was obsessed with it. "He was completely taken by the reality that that was going to happen," Bossert said.

This intensive focus culminated in a speech at the NIH 15 years ago, in which the 43rd president "laid out proposals in granular detail -- describing with stunning prescience how a pandemic in the United States would unfold," ABC recounts. Dr. Anthony Fauci was among the experts in the audience. This mashup is really striking:

This whole story cuts against several unfair caricatures of Bush (disclosure: I served in his administration as an intern), who was frequently portrayed as an intellectually-incurious dolt who bungled everything he touched. Setting aside one's feelings about his administration's responses to the terror attacks of 2001 (war and peace will be a defining centerpiece of his legacy, for better and worse), and granting that the Katrina aftermath was a mess, Bush correctly identified a major looming threat after reading a seminal book on the subject, then acted decisively. His planning at least provided some roadmap for a federal response to the 'big one,' which arrived more than a decade after he left office. There have been related, bipartisan failures ever since he delivered the above address, including on his watch. But he deserves credit for highlighting an enormous ticking time bomb and taking aggressive steps to at least partially defuse it. If only his attention to the matter had been shared by his successors.

Another national figure who was ahead of the curve on this subject is billionaire Bill Gates, whose heroic and prodigious funding of vaccine pursuits is simply incredible. He gave a 'Ted Talk' centered on pandemics in 2015, which has now been viewed tens of millions of times. I'll leave you with Gates discussing the present Coronavirus crisis on "Fox News Sunday with Chris Wallace":