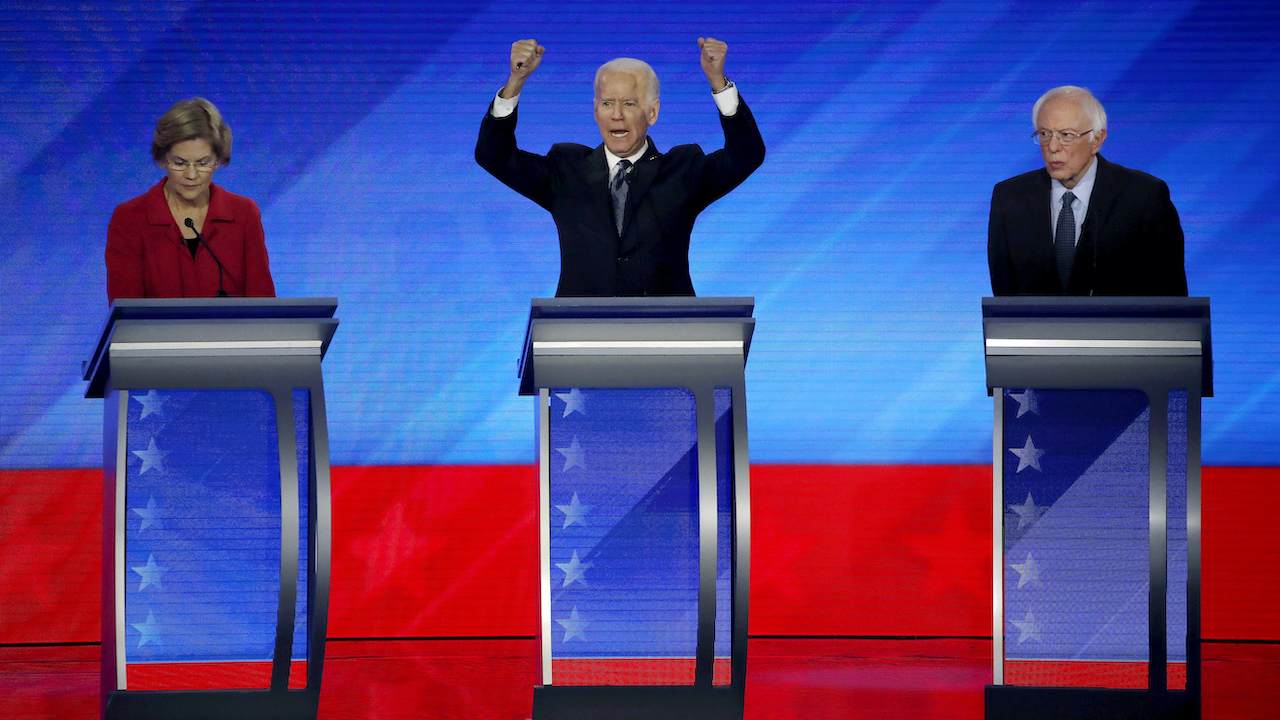 Let me tell you about two hypothetical presidential candidates.  One has won the most votes in each of his party's first two nominating contests, is raising money at a rapid clip (mostly from energized small donors and grassroots supporters, and is consolidating his ideological 'lane.'  The other has finished in fourth place or worse in those same two elections, has struggled to gain fundraising traction, and is competing against several ideologically-aligned rivals, all of whom has plausible reasons to remain in the fight.  Which one of those two candidates would lay a stronger claim to "frontrunner" status, would you say?  It's no secret that I'm describing Bernie Sanders and Joe Biden, respectively.  One factor I didn't mention was Biden's consistent polling lead nationally, but the Vermont Senator has pulled to within mid-single-digits of the former Vice President  on that front -- a disparity that could conceivably shrink further in the wake over another underwhelming Biden performance.

Granted, we're preemptively analyzing a scenario that hasn't actually played out yet, and the voters of New Hampshire could deliver a few surprises tonight.  But the Granite State's straightforward primary is generally easier to poll than (cough) Iowa: Indeed, dating back to 2004, the RCP average has accurately predicted the winner of nearly every contested primary, with the only big misfire being Hillary Clinton's shocker over Barack Obama in 2008.  So what is that data set predicting for tonight (as of Monday)?

As of today, Bernie's average lead was north of seven points.  In any case, anything other than a 'Sanders 1, Buttigieg 2' finish would be a major surprise.  As for the next tier, it's totally reasonable to project the combination of Elizabeth Warren, Joe Biden and Amy Klobuchar to finish anywhere in the third-to-fifth-place range; they're all separated by less than two percentage points.  These tracking polls have been a bit bouncy for my taste, but let's say they're in the ballpark.  Could Biden finish fifth?

Klobuchar is continuing to rise since the debate but still a distant third, while Joe Biden is currently sitting in *fifth place.*

I can't say for certain what impact a pair of fourth-or-worse finishes in both Iowa and New Hampshire would have on Biden's standing, but I can't imagine it'd be great for business.  And if the Klobuchar surge is real (the numbers above, her cash influx, and her crowds suggest that it might be), some analysts see a 'dream scenario' emerging for Bernie Sanders:

A Klobusurge, if confirmed in the results tomorrow night, would raise the possibility of something of like a dream scenario for Sanders. And Bloomberg looms as a possible additional source of division on the center-left down the line

Wait. So Sanders may get not 1, but two moderates who will come out NH not named Biden with legit standing to go forward with their bids? And... and, neither has shown ability to appeal to black voters? Plus Bloomberg awaits.

Assuming Bernie wins, and the polls are more or less accurate, Biden will of course muddle through and stay in because he's got a South Carolina firewall on the horizon.  Klobuchar could claim to have the most momentum in the race, implicitly presenting herself as a safe and reliable fallback if Biden falls apart.  Buttigieg would say that he's a top-two finisher in the first two contests, so of course he'd have no reason to pack up shop.  And then there's be Michael Bloomberg, spending prodigious amounts of money on Super Tuesday states, effectively still laying the groundwork for truly entering the fray.  That's four 'moderate'/center-left candidates with a plausible case for viability.  On the other side of the ledger, Elizabeth Warren could quickly turn into an apparent also-ran, saddled with ebbing support and no obvious springboard to jumpstart her efforts.  That's...a pretty attractive situation for Team Bernie, no?

Again, New Hampshire voters could scramble the calculus in a major way by doling out a few surprising outcomes this evening -- but the current data points to Bernie as frontrunner, Biden fading badly but clinging to hope, and multiple others feeling energized and equipped to stay in for quite some time.  I'll close with a few thoughts on the brutal Biden-on-Buttigieg ad that Grandpa Joe dropped over the weekend:

This is the most brutal ad I've seen in a long time.????
pic.twitter.com/aQpb2P6LH7

This spot is designed to make Pete look small and comically unqualified for the most powerful job on earth. The racial knife-twist at the end is also a preview of Biden going for the jugular among black voters in South Carolina and elsewhere.  There's some risk in attacking Buttigieg for competently performing his mayoral duties and accomplishing things that matter in people's lives.  Urban beautification is nice, after all, as is helping people finding their missing pets more easily.  But Allahpundit thinks the complaints are overblown and the ad is cutting:

The most basic concern about Buttigieg is that he’s not ready for primetime, a silver-tongued not-yet-40 lightweight who hasn’t spent a day in his life executing policy beyond the borders of a small midwestern city. It’s not that local quality-of-life concerns are unimportant, it’s that we don’t normally view them as relevant experience for commanding the U.S. military or negotiating a trillion-dollar infrastructure package...So yeah, this ad is effective because it gets to the gut anxiety about Buttigieg: Who the hell is this guy and why should we make him the most powerful person in the world?

He's the smart, calculating, very young former mayor of America's 308th largest city -- who also tried to run for statewide office and got trounced by 25 points against a Republican who ended up managing to lose a US Senate race in a year that Indiana went red overall.  Highlighting this weakness (the notion that a person with this thin of a resume could take himself seriously as presidential timber could actually be framed as preposterous) is totally fair game.  The fact that it's Biden feeling forced to throw these punches, days before he's expected to once again win far fewer votes than Buttigieg among Democratic voters, that is so eyebrow-raising.  I'll leave you with a reasonable theory behind Warren's weakness:

My Warren theory: a significant (and negative) turning point for her was the release of the @UpshotNYT/Siena poll showing her doing worse vs. Trump than Biden/Sanders in six critical states.

Who made up Warren’s base? Empirically-minded @nytimes readers desperate to beat Trump.

Yes, that poll plus this policy disaster was a one-two punch from which Warren has never really recovered.

UPDATE - Another data point that is basically par for the course, but throws some doubt on Klobmentum:

I'll also add that a handful of lesser-known polling outfits produced numbers showing Mayor Pete in a statistical tie with Bernie at the the top. Polls close in mere hours, and we'll have our answer.