Analysis: Round One of House Democrats' Impeachment Hearings Changed Nothing 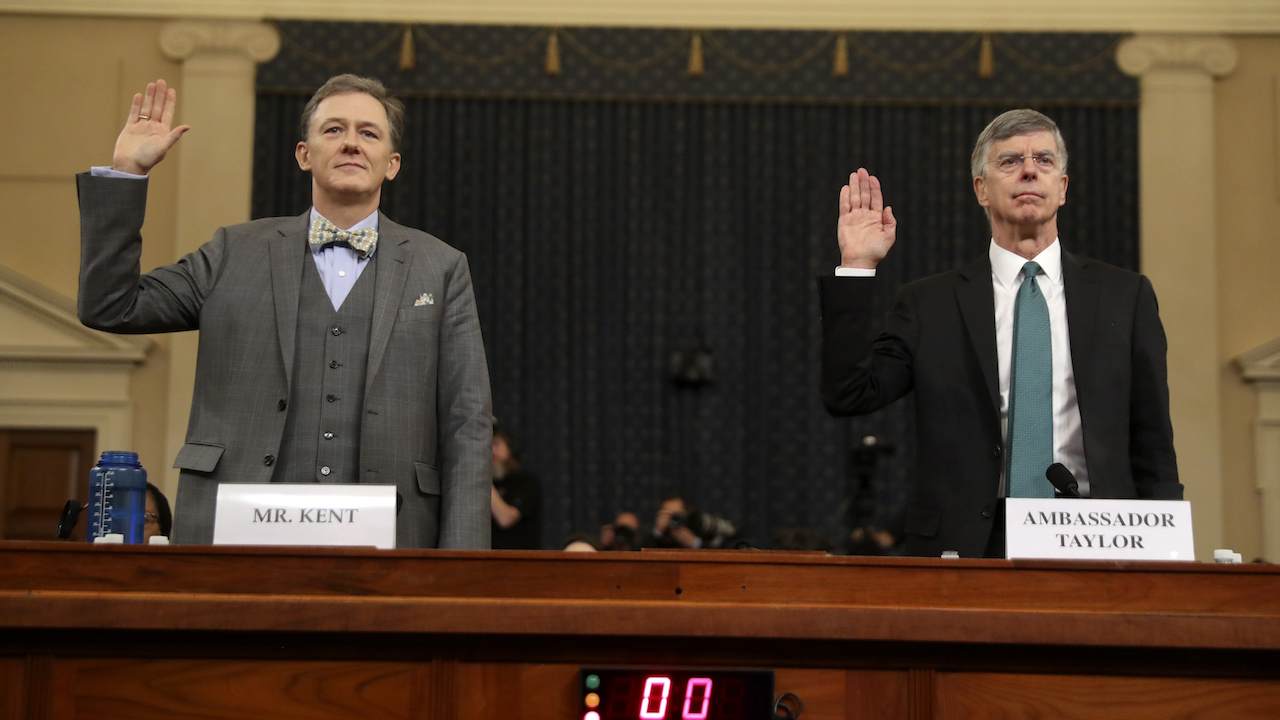 Having watched hours of the House Intelligence Committee's impeachment hearings on Wednesday, with another marathon session upcoming, my conclusion is this: Nothing has changed thus far. Those who believe the president should be impeached will remain convinced they're right, opponents of impeachment will claim that Democrats and their 'star' witnesses underperformed, and people like me -- who believe the president attempted to egregiously misuse his power, but that his conduct doesn't justify uprooting him from office -- will say that the testimony did not move the needle on either point. The two witnesses, Amb. William Taylor and George Kent, were credible and professional. What they described over the course of their testimony was deeply concerning, but it did not bring anything significant or new to light, beyond what we already know. The one possible exception, treated as a bombshell by much of the media, was this game-of-telephone allegation about an overheard phone call:

4/"...Ambassador Sondland responded that President Trump cares more about the investigations of Biden, which Giuliani was pressing for...

"It is my understanding that the Committee is following up on this matter."

I've seen some on the Right dismissing this as mere 'hearsay,' but Amb. Sondland will soon testify, at which point he can directly confirm (likely, in my view) or deny that this happened. The more salient point, in my view, is that even if confirmed, this phone call proves...what, exactly? That Trump was very interested in the Ukrainians announcing investigations? We already know this, thanks to basically all the available evidence, including the Trump/Zelensky transcript itself. This is another data point affirming Trump's keen interest in the matter. This has been firmly established many times over. It's not a smoking gun on a quid-pro-quo tying the announcement to military aid (which very well may still be clearly proven).

Republicans notched a few incremental victories over the course of the day, with Jim Jordan and Elise Stefanik, in particular, being lauded for their incisive questioning. First, they smart noted that the Trump administration delivered key lethal aid to the Ukrainians, whereas the Obama administration had rebuffed those requests. As was the case with the Russia matter, despite the president's problematic words and actions on several fronts (which are not irrelevant), his administration's policy has been more muscularly anti-Russia and pro-Ukraine than that of his predecessor. One might not realize this, in light of the current partisan rhetoric coming from cheerleaders of the previous presidency. Second, they also got Taylor to testify that over the course of three post-phone call meetings with Zelensky, while the quid pro quo was allegedly underway, the Ukrainian leader never raised either the 'quid' or the 'quo' at all.

Third, George Kent testified that he raised serious concerns with the Obama administration about conflicts of interest surrounding Hunter Biden's lucrative role at Burisma (consider this additional evidence, too), stating for the record that it's a legitimate subject for scrutiny. Fourth, Chairman Adam Schiff delivered an unforced error by laughably claiming that he still doesn't know the 'whistleblower's identity, which makes zero sense and further undermines Schiff's credibility. And fifth, they established that neither end of the quid pro quo ever came to fruition. The Biden/Burisma probe announcement never happened, and the military aid ended up going to Kiev. That last point, although potent on its face, is not exculpatory if this (thus far not-disproven) report is accurate:

The quid pro quo was extremely close to being carried out but was interrupted by Congressional scrutiny and outrage. That can hardly be chalked up as a vindication of Trump. John Podhoretz, a Trump-critical conservative, writes that Democrats did not advance the ball on impeachment during Wednesday's proceedings:

If Democrats think they advanced their case for impeachment with the first day of hearings into the Ukraine matter, they are deluding themselves. The proceedings were confusing, not clarifying. Speaking as someone who has followed this matter in granular detail, I found it extremely difficult to tease out the set of undeniable facts that would prove Donald Trump did something so appalling, he should be the first president in history to be removed from ­office and only the third to be impeached. And I ­assure you, I am willing to be convinced. The problem is that the argument Democrats were presenting intertwined allegations of arguably impeachable misbehavior — the president blackmailing a foreign government with the leverage of foreign aid into helping him with a political favor — with complaints about the way the president conducts his foreign policy that have no place in an impeachment inquiry...What Democrats and those favoring impeachment and removal must prove is that in all these ways, Trump was abusing his power in an anti-constitutional way. The problem, which the first day of hearings exposed, is that so far, they fall a bit short of having the goods — the, shall we say, “unimpeachable” goods — in a way that would convince a significant majority of the American people that he deserves constitutional defenestration.

Despite much of the media framing, Democrats have a lot of work to do in moving public opinion on this divisive issue. I'll leave you with Stefanik declaring Democrats' performance an 'abject failure' after day one:

“This was an abject failure for the Democrats and for Adam Schiff.” -@EliseStefanik pic.twitter.com/KqMWogak7R